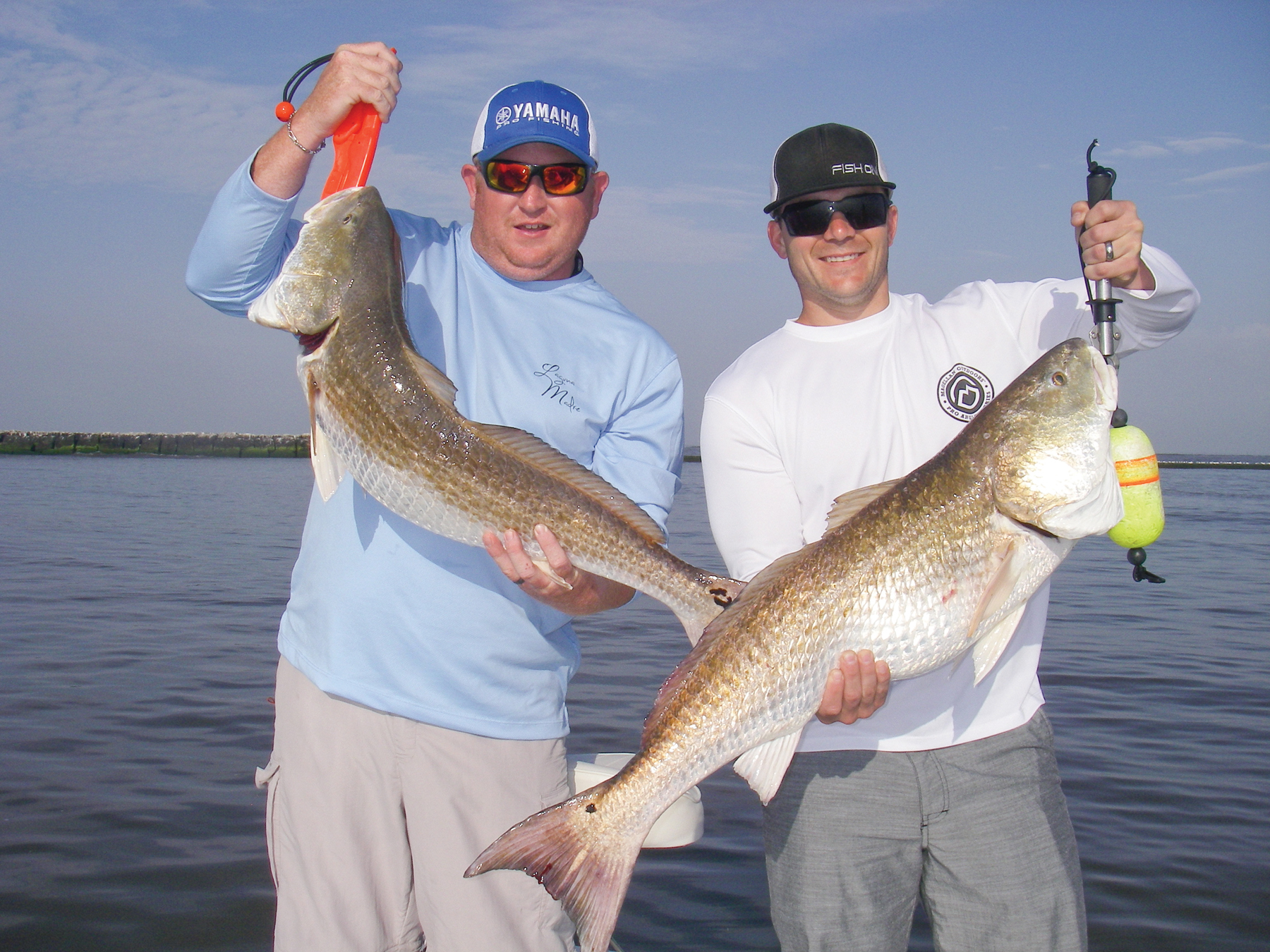 Oversize reds have provided a solid Plan-B.
If I only had a dollar every time over the past month that yet another canceled trip has ended "I don't know, but I will call you as soon as things improve." "Things" being a lake as fresh as a farm pond and muddy enough to track coons across.

The SRA did their best to control the level on Toledo Bend but way too much rain in the watershed above the impoundment altered that plan. The deluge that inundated Orange on the third day of the Bassmasters Elite dumped six inches and slammed the door on a very good bite in Sabine Lake.

As of today, the massive impoundment is just holding its own with one generator running 24/7 and seven flood gates opened at least a foot which translates to a flow of 17744 CFS rolling down the Sabine River. The river is holding at flood stage just above Orange. A rising Neches isn't helping and we are expecting more rain tomorrow.

In spite of our best efforts we have not figured out what the trout are doing to adjust to all the fresh water. For the most part, the mud is only a confidence breaker for the angler, but seeking sufficient salinity is a life and death matter for the trout!

Easily the most frustrating aspect of the flooding, aside from missing paychecks, is that we were not only catching some of the largest trout of the past several years but, the redfish bite was out the roof and the flounder were already making their way back to the lake. In February alone I either personally saw or received photos of five double-digit trout and several more over nine.

Those are the kind of fish that keep us forcing the issue and trying to figure out how the trout are going to adapt until things improve. I look for the trout on the south end to gather on the deeper Causeway reefs and the ship channel all the way to the jetties. Incoming tides ushering in saltier water and more bait should be strong enough to counter the fresh water in the lake.

The trout on the upper end of the lake, however, will probably retreat to the ICW and the lower river channels. The permanent deeper band of heavier saltwater will offer safe haven, but they will still have to make brief forays to the shallows to hustle their next meal. I personally love to exploit these deep water fish, but it is next to impossible when there is little bait available at that depth and the trout are in survival mode!

Two to three weeks with no significant rain is probably an overly optimistic guess as to a return to more normal conditions. I personally think the bite on the Causeway reef will be the first to recover, but both the north revetment wall and Coffee Ground Cove should not be far behind. For the short term, the most consistent bite will take place along the ship channel from the Causeway to the jetties on big incoming tides.

I have no doubt that the flounder and redfish bite will recover much quicker as they key in on shad exiting the marshes on the east side. Willow, Madam Johnson's, Three Bayous and Black's all afford productive water and some protection from wind as well. I would not be surprised if you find a few trout homesteading the deeper canals.

A GULP Swimming Mullet on a 1/4 ounce jig has to be the most dependable lure for these backwater areas, but we also catch a world of fish on 3" Usual Suspect swimbaits, three- to five foot diving crankbaits, and single-spin 1/4 ounce spinnerbaits. Both curl tail and paddle tail plastics work well on the spinnerbait.

If indeed it is once again "game on" before the next month's edition, expect to find good numbers of larger trout frequenting the shallow flats bordering the ICW. These flats should produce before those on the Louisiana shoreline, but the fish will make that call.

An incoming tide that floods those flats is the prime time to be there. The water is usually clearer and trout in the three to seven pound class chase shad and mullet out of the ICW and up on scattered shell in 3 to 5 feet of water. She Dogs and Spooks, Die Dappers rigged on 1/16 ounce heads, Catch 5s and a four inch Usual Suspect are all hard to beat when the fish are aggressive. A tail fished under a cork is never a bad choice either.

Sign the kids up for the CCA STAR and take them fishing!