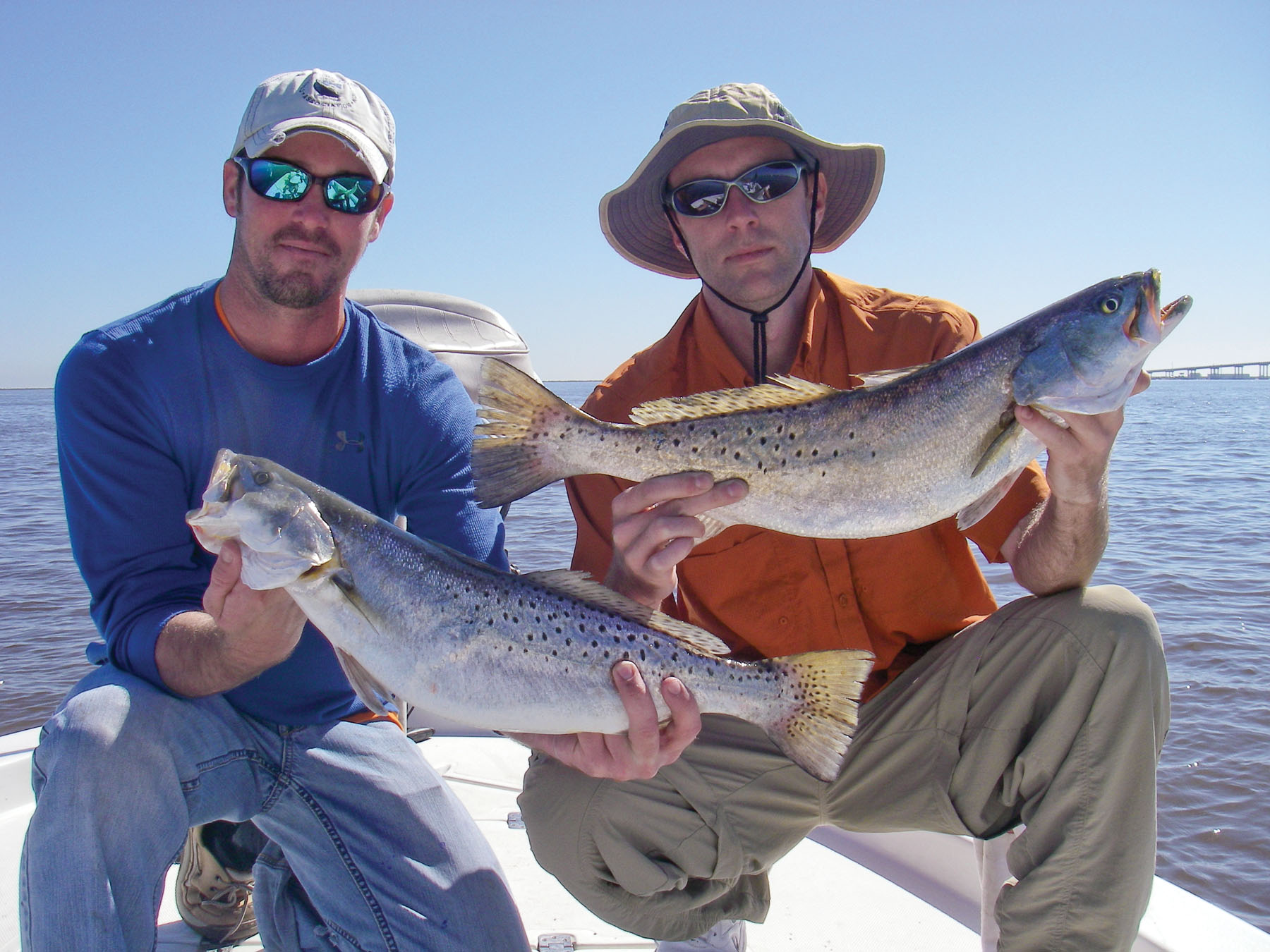 The longer I fish, the less I understand about the very fish I chase. After suffering through a year long drought it started raining the last week of February and didn't slow down until the fourth week of March. Over that five week span, Toledo Bend rose ten feet and was once again above the 170 mark and discharging water.

On top of that, a storm cell parked just north of Sabine Lake the 20th of March and dumped 12-inches of rain in less than five hours. The lower river is still above flood stage at this time and the bayous continue to drain low lying marshes. The initial assumption was that after a very productive late winter trout bite, thanks to manageable winds, the fresh muddy water would back us up once more.

Never assume anything. The boat launches were still covered in mud and debris when we discovered the trout had only moved a little further down the lake and the bite never slowed down a lick. If anything…it has only gotten better.

As you would expect, the action on the north end of the lake isn't as good as it will get once the rivers and the bayous clear up, but the redfish and flounder are still holding their own. The combination of bull tides and runoff is keeping them closer to the shoreline and drains as they prey on newly hatched shad exiting the marshes. Gulp, spinnerbaits, shallow diving crankbaits, and 3-inch Swimbaits are hard to beat when working this pattern.

The mid-lake flats on the Louisiana shoreline and the revetment walls have yet to give up great numbers for me, but the majority of our trout over six-pounds have been taken in those two areas. The key has been figuring out how deep the fish are holding on any given day. One morning the fish are on the rocks and the next day they are two casts out.

When they are holding tight we have done extremely well with Swimming Images, Catch 2000 and MirrOdine XL. When they are further off the rocks we have done better with 5-inch Sea Shads, Die Dappers, and Trout Killers in opening night, limetreuse ghost and pumpkin chartreuse. When they are really doing their thing, however, you cannot beat a topwater for duping the best of the trout.

Basically the same lure choices are working when drifting or wading the flats on the Louisiana shoreline. The only drawback to wading has been that we are still catching a lot of our trout in five to six feet of water. A drift sock and a Talon are more effective tools for exploiting that bite than a pair of waders. If it's big fish you are targeting, the number one mistake you can make is not throwing a topwater lure in the deeper water.

Find the mullet, there only has to be a few, and the larger trout are right behind them. I usually start with the larger Gundog Flush or a Spook, but invariably most of our fish fall victim to a She Dog. The black-white ribbed Geaux Daley model or black with a chartreuse head has been good in low light conditions with bone or chrome patterns more effective later in the day.

Once again, depth is the key on these flats. The shallow water is the easiest to cover and possibly eliminate so we start each morning in 2 to 3 feet of water. The five-inch plastics rigged on 1/8 ounce heads and the swimbaits are more effective as you drift into the deeper water.

As a result of all of the runoff, the Causeway reef has drawn a crowd for legitimate reasons. There haven't been a lot of five-pound plus trout caught thus far, but the 16 to 20-inch trout are stacked up on the shell along with some drag burning redfish. Strong tide changes will usually ignite a bite under the gulls as well.

Tails fished on a large enough head to compensate for the strength of tide always get the first shot, but topwaters and suspending lures can be equally good fished around the docks and back in the pocket over shallow shell. Look for bait on the surface or slicks as there is a lot of ground to cover.

I have been drifting the Carolina rigged Maniac Mullets I was using in the river over the deeper shell and caught much better trout on average. The slow sinker fished with a 3/16 worm weight has been the best combination most days. I have deposited my fair share in the shell thus far, but the potential for catching substantially larger trout is worth the gamble.

Take the kids fishing today and you'll have a ride down the line!