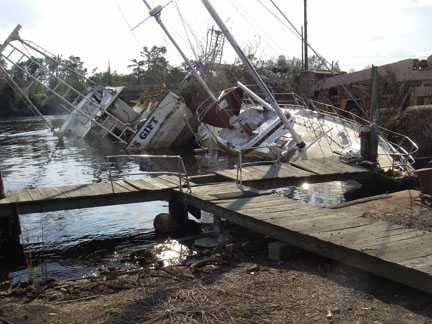 Even the marinas in the bayous took a beating.
I wish that I could tell you that the dust had settled and things are back to normal on Sabine Lake, but it takes a long time for 2 to 3 feet of mud to dry.  The often maligned sea wall built to protect Port Arthur did its job, but in the process, redirected Ike’s massive surge over the top of Bridge City and much of Orange.

Unlike Rita, which left us wrapped in a sea of blue tarps, Ike left the entire area buried in a thick mixture of black ooze and decaying marsh grass.  Ninety percent of the homes in Bridge City alone were reduced to gutted shells with no flooring, no sheetrock or paneling, open windows, and personal belongings still stacked on the curb.

Only because my home is located on the north side of the Interstate-10 were we spared the flooding, but everything we had associated with our business was in south Orange and it is history. Capt. Chuck Uzzle and his family were not as fortunate. They came back after the hurricane only to find water and mud up to the chair rail in their house and Capt. Mike Rector, who lives on the bayou in Bridge City, had water up to the ceiling.

While the marinas on Cow Bayou and Adams Bayou are still locked down, most of the launches can still be used.  There are no amenities and we average about two flats per week due to roofing tacks and nails, but we are making progress.

I spent more days this past month cranking up a 5 horsepower Honda pressure washer than my 225 Yamaha outboard, but still fished enough to find that in spite of the massive fish kill, the lake has rebounded surprisingly well.  It took a while for all of the oxygen depleted water in the marshes and bayous to empty out, but the bite has been good.

The landscape is significantly different than it was the day before Ike arrived.  The road on the north revetment wall is washed out and a lot of the rocks that form the wall are on top of the levy.  The surrounding marshes have been crushed and the north side of the ICW resembles a war zone.  Trees are uprooted, several small boats are lodged in the mud covering the grass on the levies, and the shoreline is littered with pieces of buildings, clothing, and appliances.

No other stretch of shoreline, however, took a harder hit than the area between Madam Johnson and the Gator Hole.  It was a magical area that produced an incredible number of big trout, but it will take a lot of healing.  A huge portion of the marsh was simply torn loose and deposited in 3 to 4 feet of water in the form of massive grass covered chunks that extend at least a quarter of a mile out into the lake.

Pay attention to every floating bottle or jug you see as we have marked a great deal of partially submerged debris in the lake.  The birds are working over big schools of slot redfish and small trout and it is very easy to tear up a lower unit watching the gulls!

The redfish bite is unreal and only getting better with the arrival of each new cold front.  We are not catching many big trout right now, but fish in the 14 to 17 inch class are chasing shrimp all over the lake.  We have already caught a few stripers in the river and they usually do not show up until much later.

I realize this report is a little shy on substance, but I am not certain as to how the fish are going to react to all of the changes in the bottom, etc., and I do not want to lead you astray.  Hopefully, the worst of Ike is behind us and I promise to have a more insightful report next month.  In the mean time, do not pass up a chance to fish Sabine this month as I expect the fishing to be very good.

Before I shut down the computer, I would like to take this opportunity to thank the incredible number of clients and fishermen across the state that called or emailed to offer help.  An even greater surprise, that I know will please, but not surprise Everett and Pam, was the number of readers of this magazine that I have never even met that called to offer everything from money to a place to stay.

Thanks again and God bless all of you!