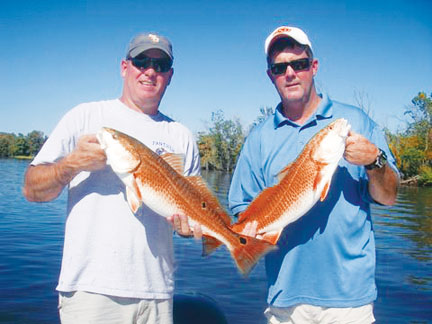 Scot Moore and Jeff Callens cashed in on a good redfish bite on a warm afternoon!
Not unlike most of the other fishing holes along the Texas coast, this is an exciting time of the year for fishermen on Sabine Lake. The lake and both the Sabine and Neches rivers are exceptionally clear, each new front forces more shrimp out of the surrounding marshes, and the dink school trout of summer are yielding to their thicker shouldered kinfolk.

As good as this much anticipated bite has been it still has not generated as much excitement among area trout fishermen area as the recent announcement that the entire line of Corkies should be available in local retail tackle outlets by mid to late January. The increased availability is the product of a decision by Paul Brown to turn over the reins, but not control, of B & L Lures to the folks at MirrOlure.

"Aside from the fact that we will be able to produce a larger volume of Corkies, absolutely nothing about the lure will be changed," promised L & S lures', Eric Bachnik. "Paul signed a ten year contract and will personally oversee every step of the operation for at least the first year. The manufacturing will take place in Costa Rica, but each lure will still be handmade with the same original components under the uncompromising eye of the creator of this legendary lure."

"While we are well-aware of the fact that at least for now, the Corky is really a "Texas Thing" in the trout fishing world, we could not be more excited to add it to our own productive line of suspending lures like the Catch 2000, Catch V, and MirrOdine XL," stated Bachnik. "The Corky is already in great demand in southwest Louisiana and it is just a matter of other coastal anglers giving it a shot."

"This is a win-win arrangement for everyone involved," he added. "Paul will finally have more time to fish, MirrOlure is excited about adding yet another weapon to our trophy trout arsenal, and availability will no longer be a problem for the serious trout fisherman!"

We probably won't be grinding away all day long with one of the afore-mentioned trophy trout favorites by the time you read this, but that could change depending on the frequency and severity of cold fronts passing through. The surface temperature has already dropped enough to put the flounder on the move and there are easily as many redfish stacking up in deeper water as there are in the shallow marshes.

It is hard to turn your back on schools of redfish and trout hustling shrimp under the gulls, but the larger trout are already showing up on the flats on the north end of the lake in search of a larger entre. As the heavier trout turn their attention towards baitfish, two of our most productive lures prior to colder surface temperatures are the She Dog and the 5-inch Assassin.

Larger lures like the Top Dog and Spook can be even more effective choices in a chop, but the slightly smaller She Dog in bone-chrome, pearl-chartreuse, and black-chartreuse head will generally yield more strikes per outing. Do not be afraid to fish dirty water and concentrate your efforts in four feet of water or less.

In years past I have done well this time of the year swimming a five-inch Assassin rigged on a 1/16-ounce jig head in the same water. Depending on water clarity, glow-chartreuse, pumpkin-chartreuse, Texas Roach, and bone diamond are very reliable colors. I have done even better lately by altering that set up just a little and will continue to do so until the fish dictate a change.

After absolutely wearing out the fish most of the year with the smaller Crme Spoiler Shad, I am rigging the 5-inch Assassin with a paddle tail on a Mustad 1/8-ounce Power Lock Plus weedless hook and fishing it just like a larger version of the Swim Bait. The rig casts a little easier into the wind and the larger profile is a plus when fishing dingy water.

Should we get more cold weather than expected and the surface temperatures drop another 10 to 15 degrees, the suspending baits will be the better choice when fishing these same shallow flats. The Corky Fat Boy or Devil in glow-chartreuse or pink and the Catch V in electric chicken or any of the bone patterns are hard to beat on a late afternoon wade.

And if everything goes as scheduled, losing that last pink Corky to a big trout or even a rock won't be nearly as painful by the end of January!