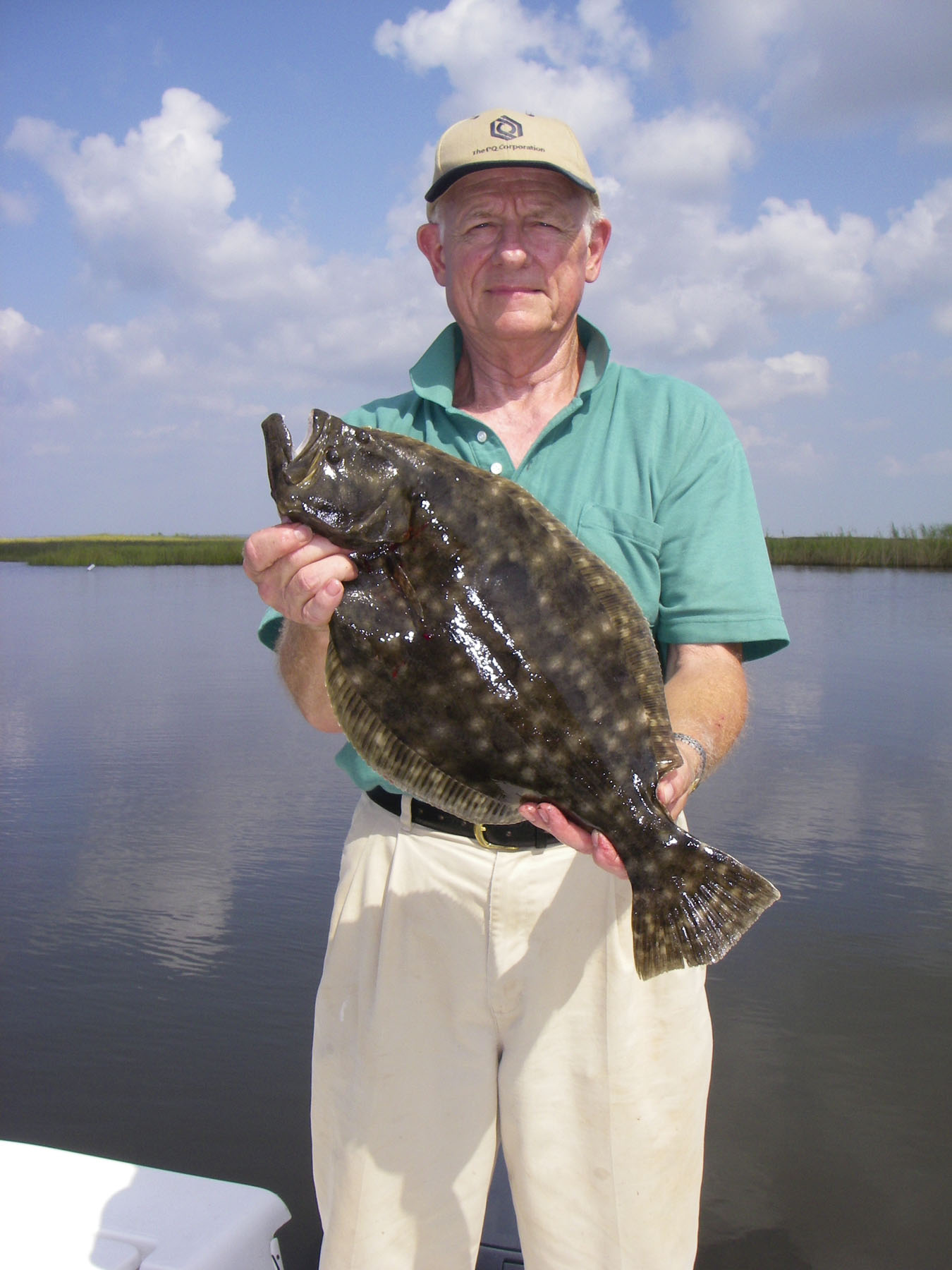 There are still some big flounder holding around the drains and cuts.
The fishing has been very inconsistent for me of late in spite of the cooler days and lighter winds. The bait is there and the water clarity is excellent, but the fly in the ointment has been extremely high water, compliments of several near-miss storms and the draw down on Toledo Bend to repair the dam.

Surrounding marshes are inundated and chockfull of not only shrimp and shad, but reds and trout as well. Hopefully, by the time you read this all of that water will be blown out and it will be "game on" in the lake!

Before getting into what to expect should Mother Nature elect to cooperate this month, I need to thank Vera Shiver and Warren Brister for most of my catching of late. Vera suggested that I try a new color in their Assassin Sea Shad and Warren, a local angler and friend, absolutely left me no choice.

I don't know that I could ask just any sales person to help me find the new color on the racks, but I would do it before leaving empty handed.

The new color is called Stinky Pink and I have caught fish on it this month when every other color failed to produce a keeper trout. I was struggling on the same days that Warren was just wearing out the trout and the difference was that one color.

And, while on the subject of lures and colors, Mike Tennian of MirrOlure, sent me several new colors that they are adding to the Corky stable this year and there wasn't a bad one in the bunch. He also assured me that there would be no shortage this year and our area tackle shops already bear out that statement!

After 41 years of part and full-time guiding, I am officially out of the predicting business. This entire year has been crazy starting with a bitterly cold and extended winter. We dodged any major storms, but still found ourselves having to deal with high water well into the late fall.

As of right now the trout are taking up the slack for the redfish and that in itself is unusual. The only reason for that phenomenon is that they have no reason to abandon the room service buffet in the flooded backwater. One or two strong northers can change all of that, but who knows if we'll be wearing shorts or thermals Christmas day.

Let's assume that we are blessed with more normal conditions this month. If so, there will be no bad color or magic color in tails for just wearing out both trout and reds under the birds. They will school from one end of the lake to the other and usually do so from dusk to dawn. It is the bite that the weekend angler eagerly awaits ten months out of the year.

If that is not your bag, stick to the shallow flats near deeper water and be especially watchful for slicks and bait on the surface. The larger trout can sense that winter is not far off and they take advantage of the security afforded by the ICW and Sabine River. My records, for what they are worth, show that we generally do the best fishing this program in the afternoon hours.

We will start wading and hounding bragging size trout next month, but most of this month will be spent drifting those flats with the Stake Out Stick in hand. Pleasure Island, Stewts, Sidney, and Rabbit will get the lion's share of our attention. Depending on wind direction, Coffee Ground Cove and the Johnson Bayou area can be equally productive.

As long as they will eat top waters I will stay with the She Dog or opt for a Spook in rougher water. Bone, pink, and black-chartreuse patterns all have their moments depending on light conditions and water clarity.

Assassin Shads, MirrOmullets and Texas Trout Killers in the five-inch version will not only produce the best numbers, but big fish as well.

They are most effective this time of year rigged on 1/8 ounce Pro Elite heads.

Very few anglers around here target redfish as they seem to find us regardless of what we are chasing. They will school in the open lake, conduct relentless raiding parties on the Louisiana shoreline and stack up both in the river and major bayous leading into the lake. They will eat anything that gets in their way most days, but they find a Hoginar or Chrome Trap irresistible.

It won't take long to limit on flounder this month, but the best news is that they are aggressive and the average size is very good. They will make brief stops along points and passes in the lake as they exit ahead of colder weather. Live finger mullet and mud minnows soaked on the bottom are the surest bet for a stuffed flounder dinner, but we catch our fair share working these areas with spinnerbaits, GULP, and curly tail grubs tipped with a small piece of shrimp.

I hope that you are able to take advantage of the easiest bite of the year, but I encourage you to keep a few to eat and release the rest to make the rest of the year even more fisherman-friendly!