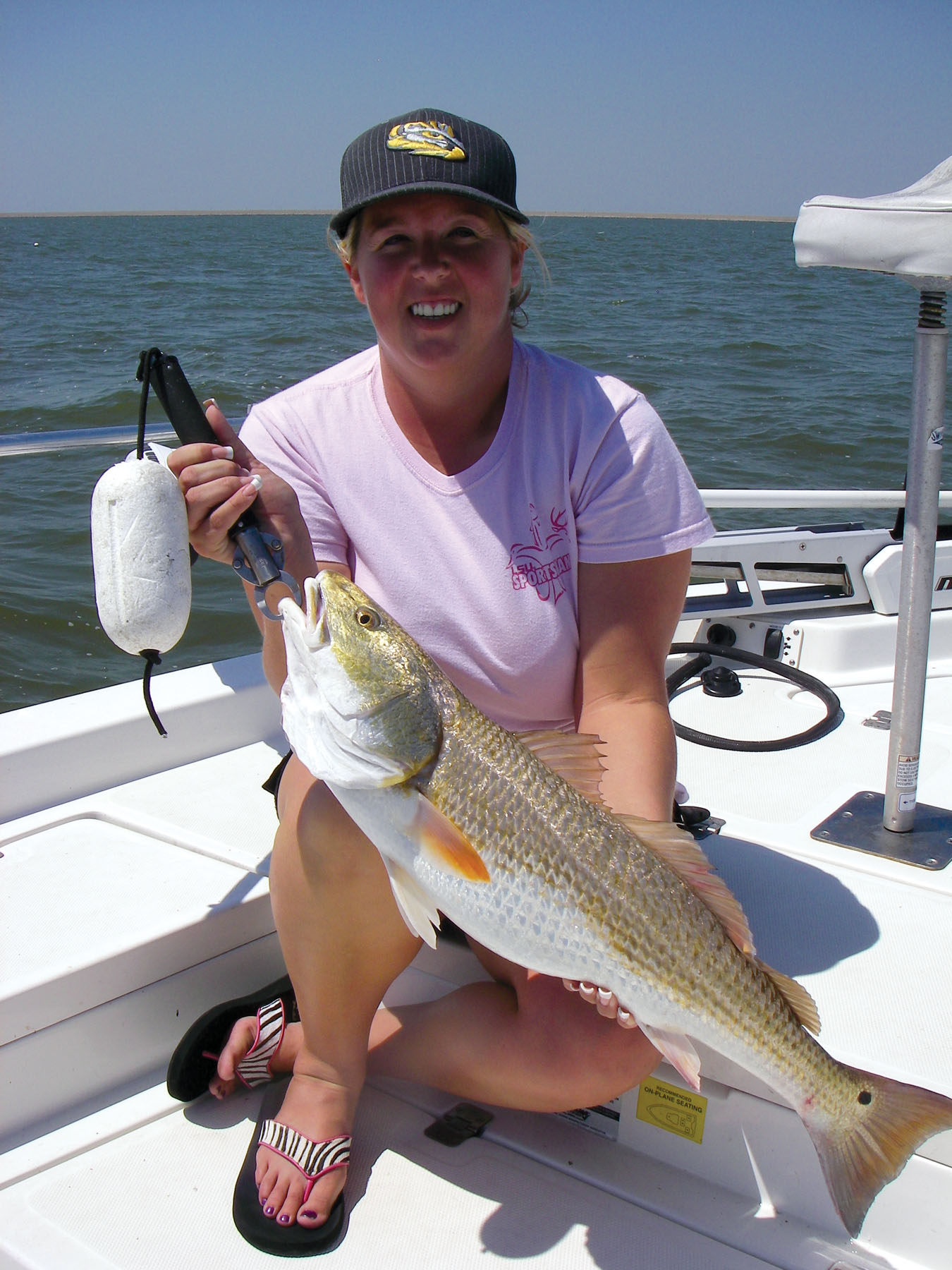 Lenzi Childress with a nice slot red taken on Sabine.

We are still waiting on wetter days and have only enjoyed one modest cold front thus far that was strong enough to purge the marshes and force a few shrimp into the lake. The next front, hopefully, will be a wet one that should thin out the love bugs and get the bite going in the open lake.

We have been fighting some unseasonably strong south winds of late that have stacked the water up in both the bayous and the river and all but eliminated any thought of fishing the lake. The good news is that we have been catching the heck out of trout, reds, and flounder in those areas, in spite of the high water.

Even the size of the trout has improved drastically over the past couple of weeks, and limits of 16- to 20-inch specks have been much easier to come by. It is not at all unusual for three fishermen to catch 50 to 75 trout in a half day, but a large percentage of those trout were only 14-inch fish until recently.

By the time you read this article we may very well be back in our Frogg Toggs and slow rolling Corky Devils and Maniac Mullets on the deep breaks, but at least for right now, there is no better choice of lures than a three-inch swim-bait. There are a lot of good ones on the market, but I have done the best recently with an H&H Usual Suspect. It comes in a bunch of very good colors, is well-balanced, and is a little more durable than most of the others I have tried.

Any time the fish move up on the break or tighter to the shoreline we are catching trout, slot reds, and flounder bouncing an Assassin Sea Shad rigged on a quarter ounce head off the bottom or fishing it under a Kwik Cork. Chicken on a chain, Texas Roach, Stinky Pink, and Bug Juice have been the most productive colors. When fishing the Sea Shad under a Cork, I have been using the new Shiney Hiney jig head with the fluorescent eyes, and it has been a game changer on even the tougher days.

This will be our first fall with the Die Dapper, and we already got a sneak preview last spring as to just how deadly the big paddle tail can be when rigged on a 1/16 ounce head and cranked at a snails pace in 2 to 4 feet of water. Coffee Ground Cove, the flats behind Stewts and Sidney Island, and the flats between Johnson's Bayou and Greens are made to order for this bait. Depending on your perception of good and bad, the only negative will be keeping the reds off the lure before the trout find it!

There is no sense in attempting to list all the lures that will work if the gulls are patrolling schools of reds and specks from Blue Buck to East Pass, and they should be. It can be an all day bite, and there is very little in your tackle box that will not work. Topwater lures like a She Dog, Spook, or Little Dummy usually produce not only the most explosive strikes, but the largest trout in the schools as well.

By the end of this month, depending on how cold it gets, we could also be earning a few shots at stripers in the river. When we aren't fortunate enough to find them blasting away at shad on the surface, we vertical jig deep structure with Hoginars and spoons. It has never been a bite that you can hang your hat on, but when they show up it is a memorable fishing experience!

It won't take you long to catch your limit of flounder this month, but at least you can look forward to catching some big ones as we have enjoyed a great flounder bite this entire year. Live finger mullet or mud minnows are hard to beat, but they will wear out a GULP shrimp or four-inch paddle tail like a Sea Shad or Flats Minnow as well. Hopefully, your first two will be solid fish and you can then chase trout and redfish as catch and release can be hard on flatfish.

The catching can be so good this month that we invariably tend to think that we have finally figured all this fishing stuff out. Count your blessings, keep a few to eat, and put the rest back to make it a little easier once reality sets in!