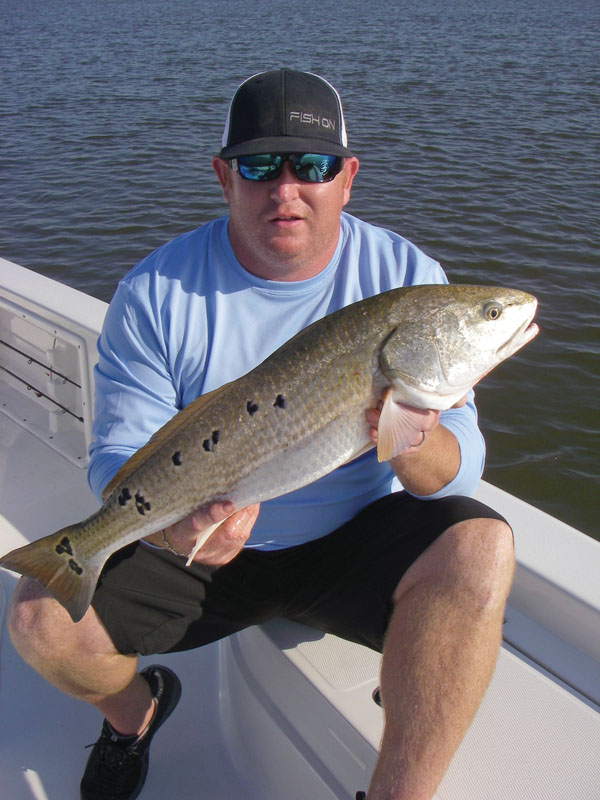 Much too pretty to keep!

We are back to wearing sunglasses and Frogg Toggs at the same time but in spite of a little more rain than we would like, the salinity and water clarity remains fine and the bite continues to improve. While the average temperature is also more comfortable, we have yet to reap the benefits of a north wind strong enough to purge the marshes and ignite the fall bite.

We are seeing more shrimp every day in the main lake but nothing compared to what we should see by this time in October. The recent combination of high water and big incoming tides has given neither the bait nor the game fish any reason to abandon the marsh lakes. That can all change in our favor, however, in less than a twelve hour period!

Back to wearing sunglasses and rain gear at the same time. Because the lenses in my Salt Life glasses do repel water as advertised, I can now safely and more comfortably run my boat even in a driving rain. Regardless of weather conditions, there is no longer any reason to ever have to take them off and that pays huge dividends at the end of the day.

While we continue to fish our way through obscene numbers of 14- to 17 inch trout, we have been unable to put together a consistent pattern that yields decent numbers of three to five pound fish. The majority of the larger trout that we have managed to catch have been holding near the deeper water in the ship channel and ICW.

After four months of adapting to all of the fresh water, it seems that they are reluctant to commit to the shallower water in the main lake. I think that as long as the food supply is deep as well, there is no reason for them to move, but that is a personal theory yet to be confirmed. In the meantime, we continue to start each day checking out the breaks bordering the ICW with topwaters and swimbaits.

The redfish are schooled up and feeding on the surface from Blue Buck Point to Coffee Ground Cove. The key to hooking up is to simply not panic and throw whatever you have tied on in their direction without backlashing. Don't crowd the school and do not run off as soon as they go down. Chunk a Hoginar, Trap, or four inch Usual Suspect in their general direction and allow it to sink. More often than not, you will hook up with one or two more fish and they will usually surface again a short distance away.

While I readily agree that the reduced flounder limit for November has helped them rebound, it also forces me to abandon a very enjoyable Plan B that has compensated nicely while waiting on the trout. We have been wearing out the flounder and slot reds that are ambushing the shrimp and shad running the shoreline on the east side of the lake.

That program will weaken anyway as the fall migration escalates due to colder surface temperatures, but until it does you can expect plenty of action pitching a white or chartreuse GULP swimming mullet or a 4-inch Assassin Sea Shad next to the roots of the flooded cane. The best colors in the Sea Shad for both the flounder and redfish have been pumpkin-chartreuse and chicken on a chain.

It can be a very user-friendly bite, but you will have to leave the house early if you hope to anchor up in front of the Cheneir LNG plant or Dick Dowling Park to take advantage of "flounder-mania." The Chenier side of the ship channel takes the bigger hit as even Texas anglers launch on the Louisiana end of the Causeway in order to keep more fish. Yes–you need a non-resident Louisiana license to do that!

We are only one stiff north wind away from being able to drift the flats while watching a TKO cork repeatedly disappear under the weight of another slot red or thick-bodied trout. Gulls and terns usually rat these fish out, but the cork and a Sea Shad, Lil' John or Vudu Shrimp will call up fish long after the birds and other boats have disappeared.

Take the kids fishing this weekend!