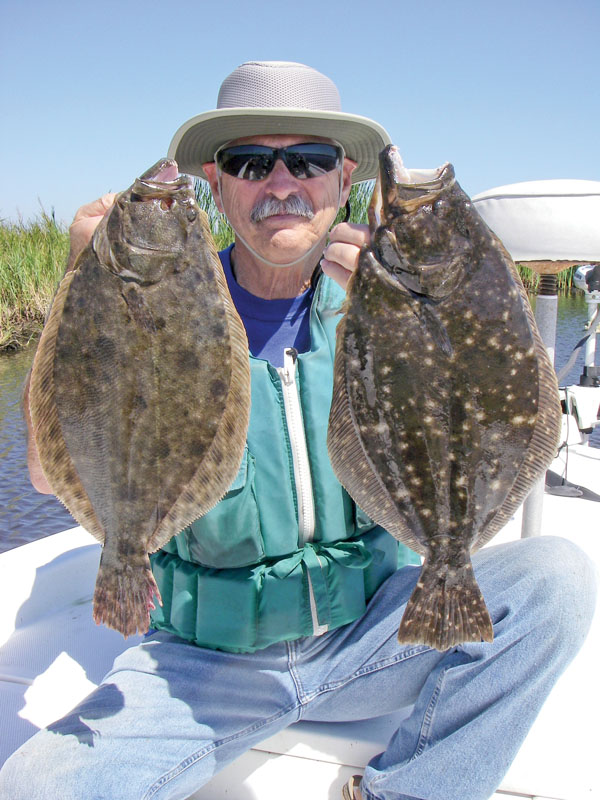 The first two flounder will usually do!
Right on cue, our bite improved the first morning that I had to run back inside to grab my Frogg Toggs to break the chill of the pre-dawn boat ride to the lake. We were back down to T-shirts and shorts by mid-morning, but the cooler surface temperature and a stiff north wind were enough to light the fuse!

It certainly wasn't as if we had been struggling to catch fish up until then, but flounder and redfish were carrying the load. Either we couldn't find the trout at all or they were too small throughout the summer. We enjoyed only a handful of good trout trips last winter prior to the non-stop infusion of more fresh water last spring than we could have ever imagined.

As you would expect with that much fresh water, the only semi-dependable trout bite was taking place south of the Causeway and it was a virtual daily carnival as desperate trout enthusiasts squeezed into Lighthouse Cove hoping to stake out enough real estate to work on small keeper trout. For all practical purposes, the jetties offered the only shot at a nice trout and that was iffy at best.

I am pleased to report, however, that we are finally catching trout, reds and flounder all over the lake. Most of the specks have been 16 to 20-inch fish, but that is pretty normal for this time of the year. We will get even more excited when we begin to see shrimp skipping across the surface, but thus far the trout are running down shad and finger mullet.

The combination of far less local rain and little or no water pouring out of Toledo Bend has greatly contributed to the improved bite as well. We have more grass to deal with, but lower levels in the surrounding marshes have forced the bait and fish into the bayous and main lake.

If there is any complaint at all about the redfish bite it is that many of them are oversized. Many of the schooling reds in the main lake are over the 28-inch mark, but fishing is not all about the next fish fry. Bone jarring strikes and initial runs that threaten to empty the reel are hard to beat and make for an enjoyable day!

For those of you headed this way, this is what I expect to find well into late December. The most consistent schooling activity for both redfish and trout will be taking place from mid-lake south to the Causeway. It is all about finding the birds and staying put once the surface activity subsides.

I enjoy that action as well, but I will be spending most of my time drifting the shallow flats adjacent to the mouths of the bayous or those bordering the Intracoastal on the north end of the lake. Tide changes impact those areas quicker and the bite can just explode immediately. An Isolated patch of shell can be a gold mine when drift fishing these shallow flats so be prepared to quickly plant your Talon or Power Pole.

Topwater lures like the She Dog and Spook are exciting to fish and generally produce our larger trout, but we spend a great deal of time with a TKO cork and a tail tied beneath it. Four-inch Assassin Sea Shads, Lil Johns and Vudu shrimp are all hard to beat. It seems like every other day a different color works best, but chicken and glow chartreuse are very reliable.

Anyone that doesn't believe that the flounder bite has improved on Sabine Lake over the last two years has simply not targeted them. Not only have the numbers improved, but the size of the fish as well. Even with the two fish limit, culling is seldom even a consideration as your first two flounder are usually very nice fish!

I don't think there is a more dependable lure on Sabine for flounder than GULP, but we also fish a lot of H&H Usual Suspects and 4-inch Die Dappers rigged on Assassin 1/8-ounce swim hooks. Both lures doctored up with a little Pro Cure scent and retrieved very slowly across the bottom will dupe not only big flounder, but trout and reds as well.

Do you have a rod and reel or any fishing tackle that is currently just taking up space? If so, make a youngster's day and invest in the future of fishing!