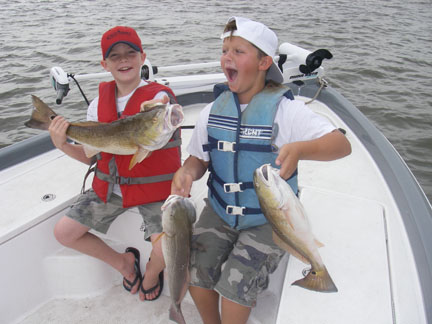 These youngsters are hooked on reds for life.
If this column leaves you a little confused it is because I am a little confused as well and in a panic strut. We have prepared for landfall with hurricanes since the early 50's and never have they issued a mandatory evacuation this far in advance. I was still tying stuff down and gassing up generators when my wife asked if I had already sent in my monthly report. Anything concerning fishing is obviously more important than life and death around here!

Because my computer has been down for a week and I have been unable to even post blogs from some very good trips of late, I am trying to get this done on a borrowed lap top. Please view this report as an unedited last minute entry and I promise to better next month.

Our bite was really improving on Sabine the early part of last month prior to getting six months worth of rain over a three day period. In less than a week's time, the jetties cleared and the trout really kicked it into gear again. That bite is excellent right now and will also be the first area to produce following this parade of hurricanes.

The trout have disappeared in the lake, but the redfish bite has been as good as I have ever seen it this time of the year. On most days we have limited on slot fish in the first half hour and enjoyed catch and release the remainder of the trip. The marshes, the north end of the lake, and the river were alive with redfish. It looks as though all of those juvenile reds we waded our way through for the past two years have matured.

We can only hope the bite recovers as quickly as it did with the passage of Rita. The bite was incredible the week after, but it did not do us much good as we spent the better part of a month just getting electricity. We could return to wall to wall gull action in the lake, but I do not expect that to happen at this point. I do, however, expect the exceptional redfish bite to continue and only improve. Our reds hustle shad and finger mullet with the bass in the river so an infusion of freshwater will not bother them at all.

By the time this issue makes it to your mail box, the easiest fishing of the year should be in full swing around here. The bite at the jetties is usually winding down, but the action from one end of the lake to the other will more than compensate for that.

The most user-friendly bite will be provided by gulls and terns working over schools of trout and redfish from the Causeway all the way to East Pass. While locating these fish is a no-brainer, targeting the larger trout can be a challenge. The reds mixed in these schools will usually eat anything they can get to first, but the better trout can be far more finicky.

Because keeping your distance while working surface feeding fish is so critical to extending the bite, I have literally sold out on the advantages of US Reel's 230SX spooled with 20-6 Power Pro braid. That little reel will cast a mile, sports a super drag system, and still looks brand new after 300-plus trips in saltwater. The no-stretch factor of the braid insures a better hookset when you have that much line out between you and the fish.

Until the better trout prove they do not want it, we will start with a Kwik Cork, two foot leader and a Sea Shad in glow-chartreuse, pumpkin-chartreuse, or Texas Roach. We will almost always try other colors before we opt for another lure. I stick with the 230 SX and a CastAway HG40 medium action seven foot rod any time I am fishing the Kwik Cork. I find it much easier to cast the cork and longer leader with the spinning combination.

If the larger trout will have nothing to do with this rig, we switch to a She Dog, Catch V, or one of MirrOlure's new larger MirrOdine XL's. There will also be those days when you can simply opt for a longer Assassin shad rigged on a 3/8ths ounce head and catch larger trout by fishing beneath the smaller schoolies.

One or two modest cold fronts should also light off the trout fishing on the shallow flats. All of the lures mentioned above are deadly on these fish. Two additional choices that have worked very well in the past are Swim Baits and five-inch Assassin shads rigged on 1/16th ounce heads. Swimming these lures over shallow shell in 3 to 5 feet of water can be deadly on our big trout population.

I will also spend a great deal of time in both rivers this month and on into winter. Based on what we have already seen, the redfish bite should be nothing short of phenomenal. They will soon be joined by some bragging size trout and flounder as well. The majority of these fish are captured through the use of live shad or finger mullet, but we do equally well on plastics and Hoginars. The secret is to fish much deeper than you would normally fish in the lake.

We have just worn the redfish out on Blurp shrimp and sea shads the last two months and that is much easier than having to start each day catching live bait. I am finally convinced that it possesses a scent that produces more bites as it has consistently outfished our conventional plastics. We already know that both BLURP and GULP work equally well on the flounder when they start their annual run.

I forgot to mention that we have already picked up a few stripers and they usually do not show up until much later. Once again, I hope this saves you a little gas money and that we see you over here this month. The traffic is already piling up on the highway and I am out of here!