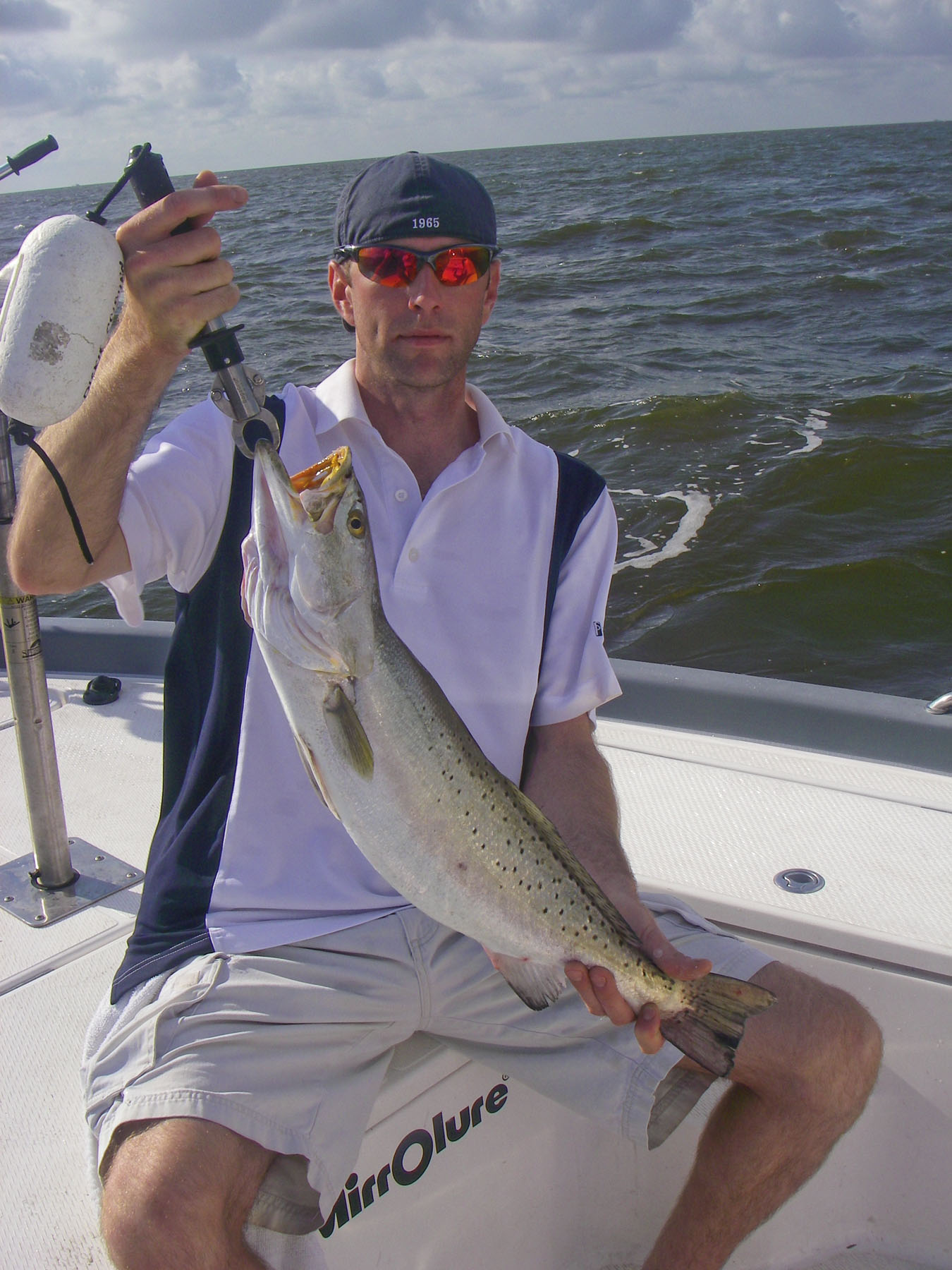 Jimmy Osborne with nice trout taken off the rocks.
After a month of some of the easiest fishing I can ever recall on Sabine Lake, I struggled to put together a consistent program in late August and the first week or two of September. It was a little puzzling in that we could find nothing to blame it on.

Another round of thunder storms drove us off the lake early today and while we live in fear of a late season hurricane or runoff from T-Bend and Rayburn, local rains are usually welcomed. We have enjoyed a few mock cold fronts ushered in on north winds that blew a little water out of the marshes and we are seeing more shrimp in the lake every day.

Surface temperatures continue to ease down and the water clarity is unusually good for this time of the year. The gulls and terns are once again ratting out mixed schools of trout and reds all the way from Blue Buck to East Pass, but there is a better bite for anglers willing to work at it a little.

Easily the two best patterns for catching larger trout this month will be crankbaiting the revetment walls and the rocks protecting Willow Bayou and targeting slicks in two to four feet of water. Basically the same lures work for exploiting both patterns, but we generally catch larger fish with tails when fishing the slicks than we do around the rocks.

The beauty of fishing either pattern this month is that the bite can explode any time of the day and on occasion lasts all day. An incoming tide is especially good and the presence of schools of finger mullet can seal the deal. Super Spooks and She Dogs worked tight to the rocks can be deadly, but the most consistent producers are Catch 2000's, MirrOdine XL's, and Swimming Images.

Not always, but more often than not, our trout slick up on the shallow flats better during the afternoon hours as the water continues to cool down. You can't be in both places at the same time, but it is a tossup as to which end of the lake to target these oily hotspots. I love the flats behind the islands on the north end, but I have enjoyed some memorable days running back and forth between Blue Buck and the Causeway reef pocket.

We generally start working slicks with a topwater or suspending bait, but they have to produce quickly or we will switch to a 5-inch tail before they have time to do their thing. Wind permitting, we rig the tail on a 1/8 ounce Assassin Pro Elite head and swim it just beneath the surface. Assassin's Texas Shad and MirrOlure's soft mullet in morning glory, pumpkin-chartreuse, and opening night usually get the first shot.

It is not at all unusual to find yourself in the middle of multiple slicks once the fish start feeding and each one often produces several trout before blowing out. Aside from long casts with the right color, the key to maximizing this bite is to stay off the troll motor as much as possible. Wading will remedy the noise problem, but it limits your mobility when following fish on the move.

By the middle of this month there will be no "wrong program" or "wrong lure" if wrestling with redfish is your bag. It can't get much better than it is right now, but the patterns will get more diversified. You can catch them under the birds, working the shoreline with spinner baits and small crankbaits, fishing the submerged grass with topwaters and weedless jerk baits or just anchoring up at the mouth of a bayou and fishing finger mullet on a Carolina rig.

Most of my live bait fishing is done in the Sabine River over the next two months and I fish with finger mullet and shad exclusively. For years, strictly out of laziness, I have made do with one of my CastAway Skeleton rods that were not designed for this type fishing, but not this year!

Gena Box Young, the hands-on President of CastAway, recently managed to incorporate her bass fishing background into a saltwater rod and she hit a home run. Convinced that most saltwater rods were just a little too wimpy to suit her taste, she helped design a limited series of rods with a faster action without sacrificing the benefits of titanium. I chose the faster seven foot MC7F to better cope with the wind when fishing larger topwaters and Corkys and it surpassed my expectations. The unexpected bonus, however, has been the advantage it provides when fishing live bait as there is far less flex on the hook set. Wimpy, it is not!

I don't look for the stripers to show up this early, but we have done very well on flounder of late. A five fish limit has come pretty quickly and we quit fishing for them as soon as we limit rather than risk injuring or killing another fish.

A great day on the water is never measured in pounds!