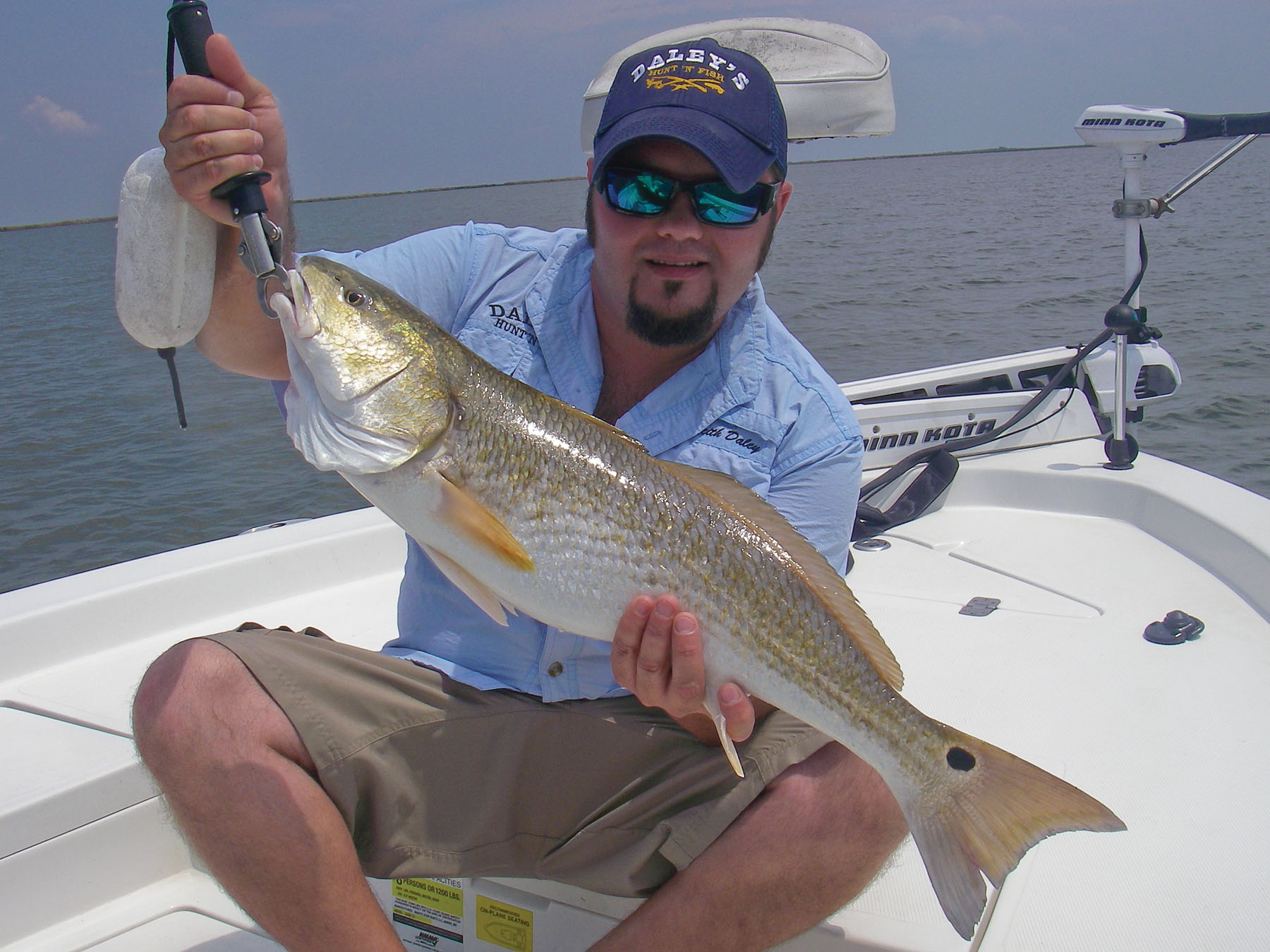 Hooking and fighting this beautiful red helped Keith Daley forget about the heat.

I don't recall ever feeling less confident in my ability to guesstimate what to expect on Sabine Lake for the upcoming month. The salinity is through the roof and the shrimp are homesteading the surrounding semi-brackish marshes with no intentions of leaving. Every time you hit the troll motor they just shower the surface while you are hard pressed to see even a few in the lake. The most promising thing I have to report is that while we have absolutely melted down most days, the catching aspect has still been very decent.

If we get a cold front and some rain before this magazine reaches you, it will be dealer's choice with bird activity providing the easiest gig. The most dependable bite, regardless of the weather, will continue to be the incredible redfish bite. It has not slowed down on even the hottest of days as the thick-shouldered bullies instantly adapt their diet to whatever is available. For the past three months it has been menhaden shad and finger mullet.

There is no wrong way to fish for them once you have located them, but the ultimate thrill is to find them schooling in the open lake. By the end of this month, more often than not, you can expect to find yourself in the middle of one school with several others churning the surface a short distance away. This will take place on a daily basis all the way from the Causeway to Hickory Cove!

When they are not schooling, you can usually locate them by drifting the flats in four feet of water or less with Kwik Cork rigs. I prefer a four inch paddle tail in Stinky Pink, Texas Roach, Bug Juice or opening night rigged on a quarter ounce head, but lots of folks rely strictly on Gulp! when fishing this technique. Three-inch Swim Baits are also deadly choices for blind casting as is the Hoginar.

Once you have located the fish, you can double your pleasure by casting virtually any topwater lure into their midst. The explosions alone are worth the price of admission.

While on the subject of topwater lures, we have caught far more trout this summer with the smaller versions of the proven brands. Before we figured this out, we could work our tail off with a mid-sized She Dog with very little positive results only to limit over the next few hours with the smaller Pup or new MirrOmullet XL. We found the same thing to be true with TTFS Little Dummy, and the Spook, Jr.

The revetment walls have also been very dependable for anglers willing to grind away with a Swimming Image, Catch 2000, MirrOdine XL, or a Swim bait. When the slicks are popping up you can also do well with topwaters or by swimming a 5-inch paddle tail like the Die Dapper rigged on a 1/16 ounce head.

Another pattern that has been very good for us has been fishing sunken piles of debris or rocks and structure breaks at depths of 15 to 25 feet in the river. Having already put together a decent list of spots that have produced good catches of not only trout and reds, but an occasional flounder as well, I only stop to fish them after idling over them and watching the depth finder for suspended bait.

Several of our larger fish have also been taken drifting these deeper breaks split-shotting a Maniac Mullet or Corky Devil. The extra weight helps compensate for the strength of tide. A small in-line swivel also helps prevent line twist when fishing this way and pearl-chartreuse has easily been the most productive color.

I am looking forward to digging out my Frogg Toggs on a chilly, rainy day!