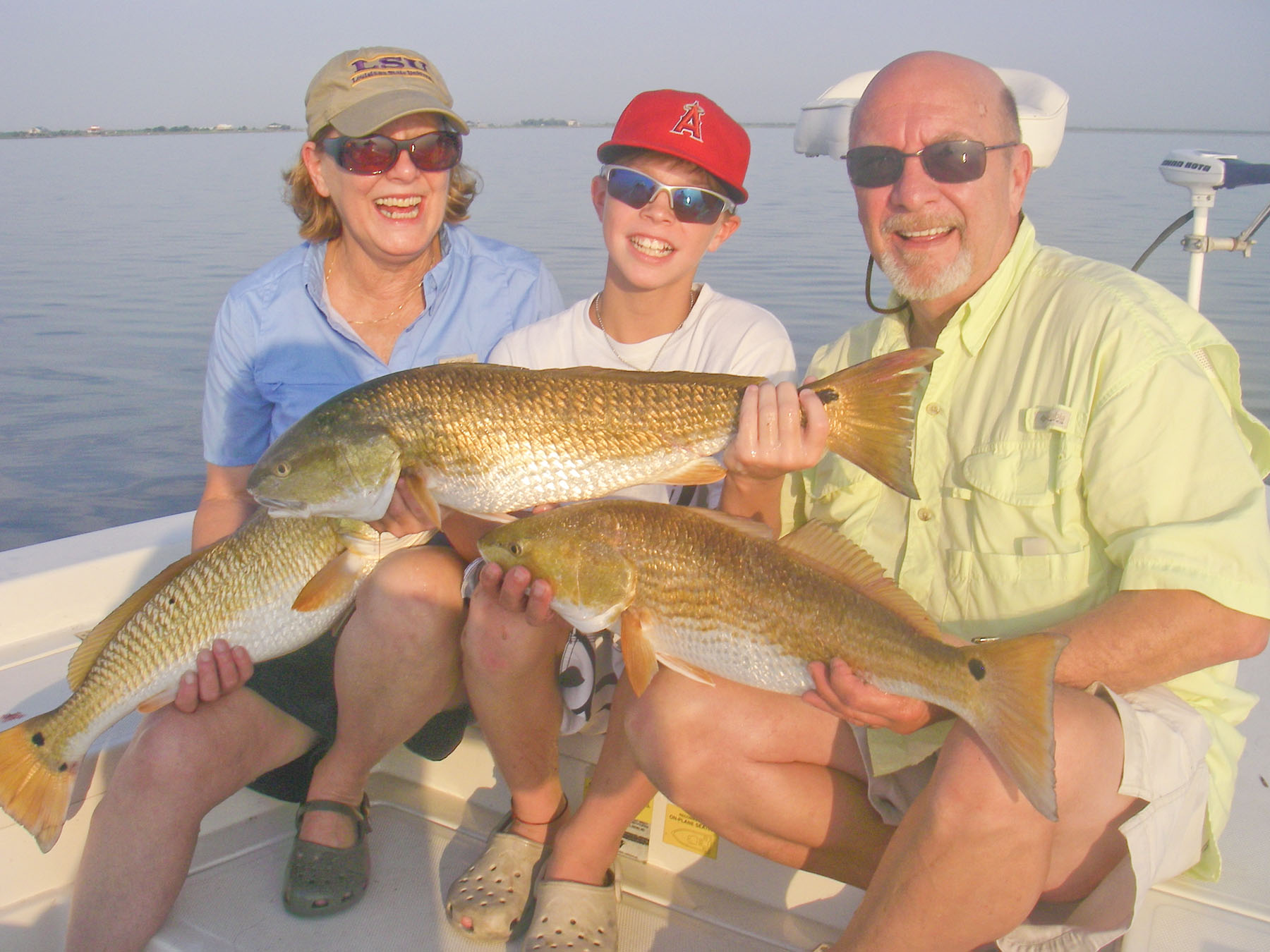 The Crismans enjoyed time spent with the schooling redfish.

The catching has been so textbook on Sabine for the past three weeks that I thought I could finally meet a deadline a little early with confidence that it would remain at least marginally accurate. That was three days ago. I am still watching hurricane Isaac literally crawl its way toward the Louisiana coast line.

It looks like it could squat on New Orleans and test their new levee system, but we could get a lot of rain out of it as well. The only bump in the road over the past month has been rain as the wind has not been a factor. Overall, the water is in great shape, but a few days of heavy rain can temporarily slow the bite on the north end of the lake and in the rivers.

All signs point toward another fantastic fall season on Sabine. We are just one or two cold fronts away from blowing the top off the fishing. The marshes are still flush with shrimp and baitfish and once they are forced to migrate to deeper water it will be game on!

The bite is already typical of fall with the exception of a dependable big trout pattern. The redfish are schooling almost daily as they push shrimp and shad to the surface all the way from Blue Buck Point to Coffee Ground Cove. As the schools have grown in size we are seeing fewer trout mixing with them and I dont blame them for steering clear of those high-impact food fights.

By the end of the month it will be dealers choice as to how you opt to catch them. Aside from the schooling activity you can work the Louisiana shoreline with spoons, swimbaits, spinnerbaits or topwaters and quickly limit most days. Take advantage of any hard north wind or strong outgoing tide by concentrating your efforts around the drains and mouths of the bayous.

I also expect the crankbait bite for both reds and trout to light-off in the ICW as well as both rivers any day now. We do very well this time of year with square-billed lures that have a tight wobble and can be cranked down 3-5 feet. The River 2 Seas Biggie and Strike Pros High Fin Wobbler work well as does the Bomber Model A. Bream or crawfish patterns work a little better on the redfish, but once the trout start chasing them, colors like Sexy Shad and chrome-black work even better.

As I mentioned earlier, the big trout have been hard to pattern so far, but the trout bite overall has been very consistent. While a good trout has been something in the four-pound class, the best news is that the bite has been good all over the lake thus minimizing the pressure on any one specific area.

When the trout are not picky about the length of the tail; we are staying with an Assassin Texas Shad, TTF Trout Killer or Tidal Surge Split Tail rigged on 1/8 ounce heads. When they are a little more discriminating we have only had to downsize to the Assassin Sea Shad or TTF Flats Minnow to get them going again.

As for lure colors, it is simply a case of light or dark most of the time, as long as it has a chartreuse tail, but needlefish and bug juice have been exceptionally good colors of late. Bug juice got really hot back in late spring, but needlefish is like magic on the larger trout when the small ladyfish and needle gar are hammering away at shad on the surface!

Not surprisingly, the few 5 to 6 pound trout we are catching right now are coming off scattered shell along the banks of the ICW. The bite has been too brief to experiment, but She Dogs in the Geaux Naked and Geaux Daley patterns have worked well enough. You can eliminate real estate by keying on slicks and small pods of finger mullet on the incoming tide in 2-3 feet of water.

One pattern that deserves checking every trip is scraping the wall with a Maniac Mullet or Corky Devil for big sow trout. It simply involves having the confidence to vertically fish the lure just off the bottom, tight to the 12 to 22 foot breaks on the ICW or the river. At its very best it is a little slow, but the technique is death on arm-length trout.

Flounder fishermen are already proclaiming this to be the best year ever, but they have said that for the past two years and that is a good thing. In the very near future they will start stacking up in the passes and holding on main lake points but for right now the bayous and river channels have been the place to be.

Hopefully, I will be able to brag on the striper bite as well next month!