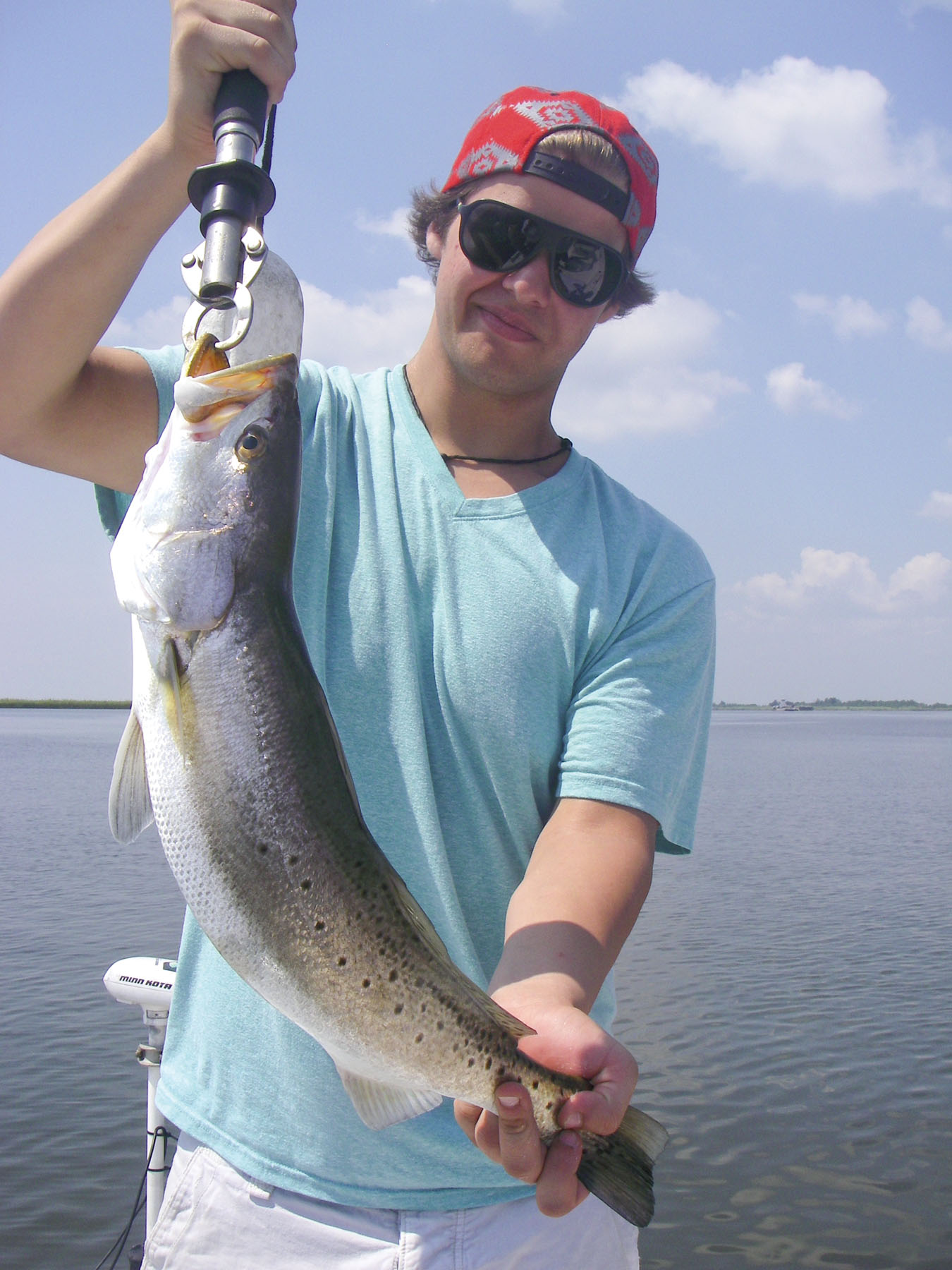 Another solid trout caught in the deeper water of the Intracoastal.
We have finally accepted that we are going to fish in the wind every day regardless of the time of year, but a south-southwest gale makes things extra tough on Sabine. With the exception of Coffee Ground Cove, which is close enough to the more protected river and East Pass to warrant venturing out in the white caps, the east shoreline has seen very minimal fishing pressure over the past month.

Every pattern in the lake is behind schedule but the bite in general is still nothing to cry about for folks willing to experiment. I have never seen more trout fishermen in the Intracoastal and the Neches and they are catching fish while others write trips off due to the wind or ever-increasing cost of gas and ethanol treatment.

The good news for first time deepwater fishermen is that the bite will only get better and the size of the trout will improve through December. I have done well bouncing four inch paddle tails like the Sea Shad or Flats Minnow off the 15 foot breaks recently, but I have also caught more fish on topwaters fished tight to the bulkheads and riprap than ever before. That may well be because I overlooked that bite in past years.

We have had a few days under the gulls but that bite has not been consistent as of yet. There is still a lot of water in the marshes and the fish have no reason to hunt elsewhere.

For the most part, any really big trout I catch this month will be a bonus as the majority of my customers prefer numbers over catch and release trophies. If you fall into that category, you can still enjoy a little bit of both by starting the day with a topwater at first light.

The north tip of Pleasure Island, the points of the islands bordering the Intracoastal and the shallow flats bordering East and Middle Pass are all excellent starting places provided you have good tide movement. The presence of bait certainly helps, but most of these areas have at least a little shell and that is a bonus as there isn't much hard stuff in Sabine Lake.

Even after the topwater bite ends I will continue to fish those same areas until I am convinced they have moved or just quit biting. Usual Suspect swimbaits, VuDu Shrimp or four-inch paddletail under a cork will usually answer those two questions in a hurry.

Wind permitting, the fish will show back up on the flats between Willow Bayou and Green's this month. It is usually a matter of whether the redfish will cut the trout any slack as they tend to pile up in those areas in incredible numbers. Topwaters provide the most exciting strikes, but most days you cannot beat swimming a five-inch straight tail; Assassin, Trout Killer or Tidal Surge Split Tail rigged on a 1/16 ounce head.

The marsh grass that Ike relocated on those flats is no longer visible but the root balls are still there and they hold the mullet year round. When slicks are popping all over the place it is time to start your wade or plant the Talon!

I most enjoy the teaching aspect of guiding and, while sometimes tempted, have absolutely no need to ever try to prove a point. For that reason alone, when I opt for one brand of tail over another, it is only because I have run out of the brand I was using or a specific color that only that company offers.

A prime example is two colors that have fooled fish the past couple of years better than any others during fall - Bass Assassin's stinky pink and TTF's bug juice. In an era when it seems any bait or color that gets hot gets immediately duplicated, these two have thus far eluded the competition. Maybe they are only exceptionally good on Sabine, but I doubt that.

While on the subject of tackle, I find myself reaching more often for my Laguna rods with the cyclone wrap. It was already a given that the unique wrap generated less pressure on the wrist when fighting a fish, but the added casting distance and reduction in the frequency of wind knots were unexpected advantages. The cyclone wrap is available on their customs as well as the Liquid Series.

Predicting seasonal patterns has been a crap shoot but the catching is still good and we should be only a couple of cold fronts shy of the most fisherman-friendly time of the year. There is no better month to introduce a youngster to fishing!