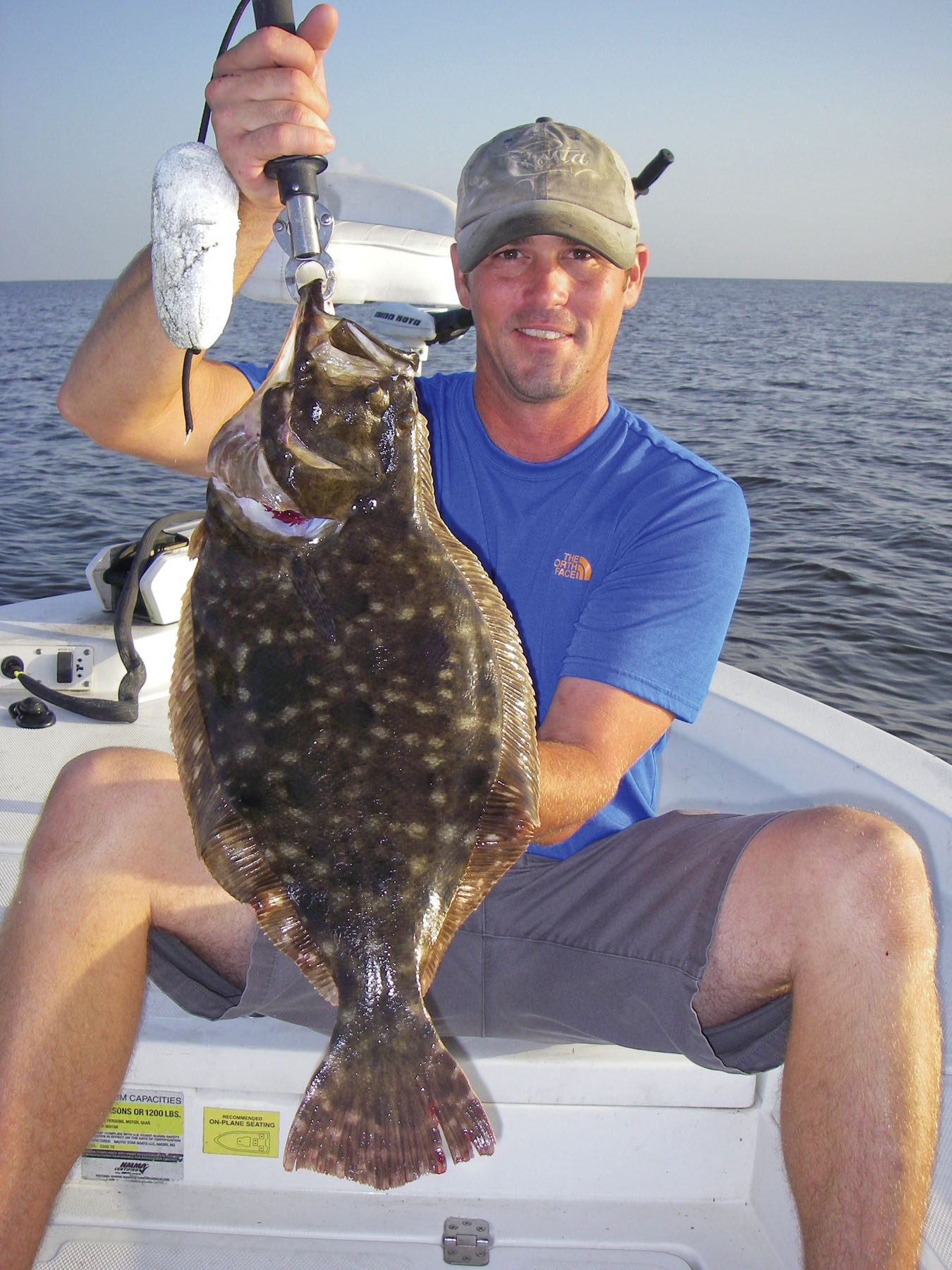 Usual Suspect swimbait was the ticket for this Sabine flounder.
After spending much of 2014 tweaking traditional patterns and better learning how to cope with too much wind, we are finally entering those coveted three months of the year when I could not care less about the wind. While the bite in the lake is as user-friendly as it can possibly get, the more protected bite in the river provides a consistent alternative that often merits first choice status.

Due to damper and cooler mornings I will be wearing my Frogg Toggs and Salt Life sunglasses. Shorts and a long sleeve T-shirt under a bibbed Toad Skinz rain suit are all I need until the arrival of much cooler weather.

I mention the Salt Life glasses because while the Zeiss lenses are as clear as advertised, they have also eliminated squinting through stinging, bloodshot eyes when forced to run the boat in the rain. As claimed, the lenses truly do prevent beads of water from accumulating and limiting your vision. Even if you never wear them in the rain you owe it to yourself to try a pair on the brightest of days. The Zeiss lenses are a difference maker!

We have gotten our fair share of rain this summer, right through Labor Day, but it hasn't slowed the bite of late. As a matter of fact, a mini-tropical depression that parked on us for the past two days, forced us to abandon the best big trout bite I have experienced in several years!

Best of all–it took place in the river. We were "scraping the wall" on those 15 to 22 foot breaks at two different locations and caught stupid numbers of big trout that included two in the 29-inch-class. Because I seldom catch trout even 28-inches, I was more than pleased to catch and release that many six to seven pounders. All but one of those big trout fell for a Tidal Surge Split Tail Mullet rigged on a 1/4 ounce Assassin jig.

As the surface temperature drops I will fish that same pattern more often than not with Fat Boys and Maniac Mullets. You will lose a few lures to shell and permanent piles of debris but the reward is well worth the risk. I prefer to fish that bite on an incoming tide.

Whether you elect to fish south of the Causeway or on the north end of the lake, the key to consistently catching our largest trout in the fall is to spend most of your time near deeper water. They will be transitioning from a steady diet of shad and shrimp to finger mullet and the larger bait fish tend to suspend in the deeper water for both safety and comfort.

The shallow flats adjacent to that deeper water are absolutely the best places to start and end your day as huge schools of bait fish temporarily abandon the ICW, river and ship channel in low light conditions. Catching both trout and redfish usually requires little more than the combination of a decent tide change and just being there before the bait retreats to deeper water.

Choice of lures is usually not that critical as someone will invariably wear the fish out on a lure you never even considered trying. Strictly because I enjoy the thrill of topwaters I will start with a She Dog or Spook Junior. As soon as that bite slows we quickly switch to swimming Usual Suspects or Die Dappers rigged on 1/8 ounce heads over isolated shell patches in four to six feet of water. After that, it is back to "scraping the wall."

When the wind allows, it takes a strong constitution to not chase gulls over reds and trout in the open lake. I don't think there is a "wrong" lure for this bite, but a Sea Shad or Vudu shrimp under a popping cork is hard to beat. Redfish will not be able to leave a Hoginar alone!

The flounder run is already much further along than usual and we are once again catching some huge females. While the Chenier LNG terminal and Dick Dowling Park are drawing the biggest crowds, we have had no problem catching numbers of good fish around major cuts along the Louisiana shoreline.

We seldom target them exclusively, but still catch our fair share with a Gulp swimming mullet on a 1/4 ounce spinnerbait, a three inch Usual Suspect Swim Bait and four inch tube jigs. We fish all three of the aforementioned choices in addition to a shallow diving crankbait when working the shoreline for slot reds, and the flounder are really a bonus.

I no longer hunt, but it still doesn't get much better than the fall. Cooperative fish, football and cooler weather!