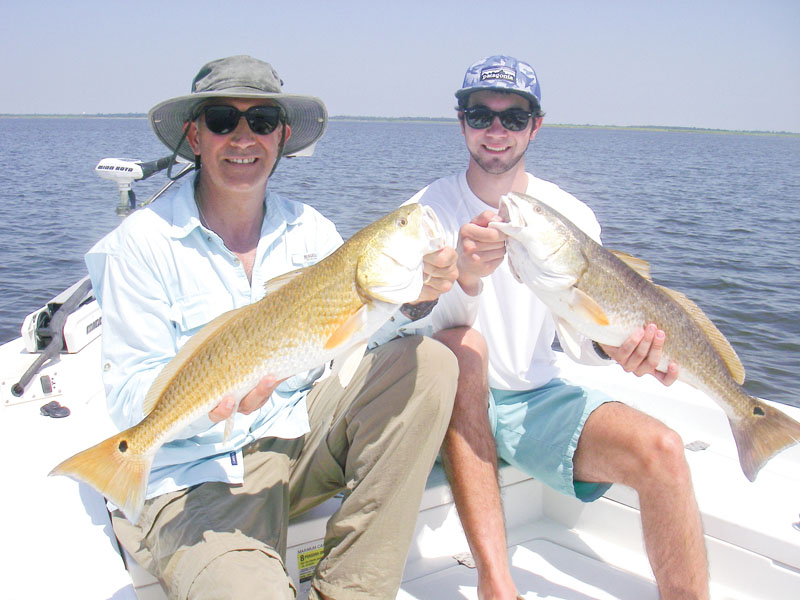 The Kyles had no problem finding the redfish.
After four consecutive months of writing columns only marginally more interesting than watching paint dry, I am tickled to finally post a favorable report. The first week of August, the glut of freshwater released its stranglehold on the north end of Sabine Lake, and as Capt. Lamar Belcher elatedly noted, "We have our lake back again!"

By the end of the month we were not only fishing in clearer and saltier water but taking advantage of cooler weather as well. We are still struggling to catch consistent numbers of solid trout but the redfish have just gone ballistic.

This is certainly not to say that the better trout are not there – they just won't currently bite what I want them to bite. While we have frequent moments with topwaters and tails, the live bait fishermen are doing much better fishing the passes and main lake points. Not only are they catching some very nice trout, but some bragging size flounder as well!

The live bait bite has been a bottom thing ranging anywhere from three to fifteen feet. They are taking advantage of the tide changes on Carolina rigs. If you plan on fishing this program bring both live shad and finger mullet as it is not at all uncommon for the fish to hit only one or the other.

The ladyfish are chasing shad and shrimp to the surface all over the lake while looking over their shoulder as the redfish are never far behind. I don't think it is possible to throw the wrong lure or color when the redfish join the melee, but not the case with the trout.

As good as the redfish bite has been we are still targeting trout and welcoming the redfish as an unplanned alternative. The most versatile bait in my arsenal for hunting fish at any depth is a swimbait, but once we find them it is not at all unusual to switch to a longer or shorter tail rigged on 1/8 ounce jigheads. Invariably a particular color, length, or tail shape will prove to be even more effective.

I am sold on the H & H Usual Suspect as far as swimbaits are concerned, but the Bass Assassin Swim Hook will convert your favorite color in any paddletail plastic into a legitimate swimbait. You have to buy into the fact that it is okay for the belly weight to be outside of the bait, but due to its shape it swims incredibly true and it instantly expands your pallet of color choices.

I really thought that it would be October before we enjoyed a consistent bite fishing tails and imitation shrimp under a cork but that bite is already going full bore. Not that it won't hold its own with any other tail when rigged on a jighead and bounced off the bottom, but I am now convinced that there is no more effective tail to fish under a cork than the MirrOlure Lil John. I still think it looks like hell, but it is a fish catching little dude!

Plastic shrimp imitations have always been a favorite for cork fishermen on Sabine and that will not change. I initially fished the DOA shrimp exclusively only to switch to Egret's Vudu shrimp due to the fact that it tricks the fish just as well and is incredibly durable. A lot of good fishermen gave up on the Vudu too quickly because the hook in the first version was woefully unsubstantial, but that problem has been remedied.

I recently tried the new LiveTarget shrimp and they catch the heck out of fish as advertised, but while they are incredibly realistic, I find them to be a little soft. They are, however, armed with a hook that will not fail on the heaviest trout or redfish. The folks at LiveTarget have been producing hard plastic lures that absolutely look alive for about ten years and their hard plastic version of this same shrimp is no exception.

As a matter of fact, I prefer the hard plastic version because of its durability. I don't think the fish will ever tear it up as I am still catching trout and redfish on the first one I ever tied on. I hate treble hooks when fishing this technique so I removed the one on the tail and my hook-up ratio hasn't suffered at all. If you like fishing shrimp imitations you need to give this one a try.

Few gifts are more appreciated by a youngster than an invitation to go fishing with you!