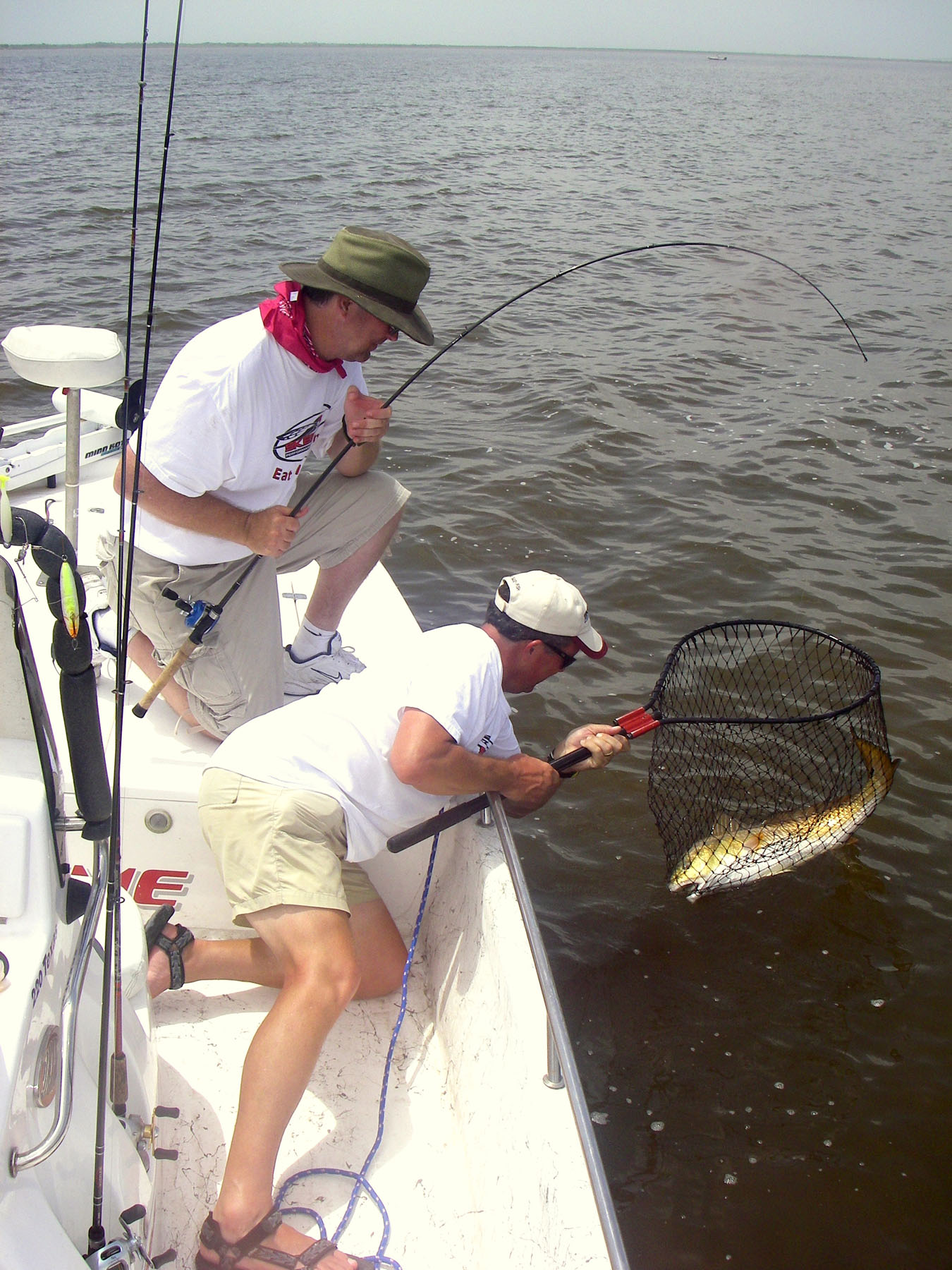 If last months' edition of your Texas Saltwater Fishing Magazine felt a little heavier than usual, there was ample reason for the additional weight. Every report from the middle to upper coast was waterlogged!

At one point in mid-July, every major river system in the state of Texas was at flood stage and water still runs down hill. Coastal anglers not only had to deal with the excess water released from impoundments upstream, but their own daily downpours as well.

I cannot imagine the freshwater negatively affecting a bay any more dramatically than it has Sabine Lake. Both the Sabine and Neches rivers empty into the north end of the lake less than three miles apart via the Intracoastal Canal. When they open the gates on both Rayburn and Toledo Bend at the same time, the challenge for the saltwater fisherman is daunting.

I would hope at this point, that I never have to refer to these daily logs again. In truth, they would be of little use. Survival has not been a matter of adjusting to an influx of freshwater and putting together new patterns, but more a case of seeking out new water altogether.

The one positive that has emerged from the soggy conditions is that after all of these years, I am begrudgingly becoming a more efficient jetty fisherman. Our only decision each morning has been making a long boat ride from the north end of the lake or trailering around to the Causeway and dealing with the absence of fish cleaning facilities.

The good news for the saltwater angler lies in the fact that if you were forced to retreat in any direction in search of better conditions, the jetties would rank high on the list. The ageless granite walls have always been fish magnets and they are no different today.

Once you snap to the fact that these nondescript piles of rock are far more than parking places for folks with a little live bait and a good anchor, you will find yourself even more appreciative of their fish producing potential. You still have to deal with the tide changes and wind direction each day, but they harbor their own subtleties that increase your fish catching odds.

Let's assume that it does not quit raining this year and you find yourself dealing with the greener and saltier water surrounding the jetties this month. Those two features alone are alien to lake and marsh fishermen that typically celebrate eighteen inches of visibility on most days.

Having fished that area very rarely over the years, I am amazed by the variety of fish that will hit the same lure as well as the incredible numbers of fish that can be caught without ever touching the troll motor. On the best of days, we do not sit on the north end of the lake and catch limits of two to five pound trout casting at the same rock nor do we catch everything from sharks to thirty- pound bull reds on the same lure.

Because it looks as though the ship channel and jetties may be the hottest areas well into football season on Sabine, I will gladly share a few things that have worked for us thus far. Make no mistake, nothing has shortened my learning curve like observing other fishermen and talking with anglers that have fished the rocks all of their lives.

If you are headed this way for the first time, do not leave your topwater lures at home. It is not unusual to catch the largest trout, as well as redfish, very early in the morning on Top Dogs, Super Spooks, and Skitterwalks. The largest models seem to eliminate unwanted strikes from smaller trout and bone or pearl chartreuse patterns have worked well for us. Fish them right up against the rocks, but expect a strike all the way back to the boat.

When fishing soft plastics, once again, we have done better with longer tails like the Assassin Eel or Split Tail. Colors do make a difference in the clearer water and I have not left the launch without glow, pumpkin-chartreuse, morning glory or LSU.

We have used nothing smaller than a quarter ounce jig head, but regardless of the size, you will not consistently catch fish if you are afraid to lose a jig head or maybe a dozen. Once again, expect the strike as soon as the lure hits the water, but fish the jig all the way to the bottom bouncing it off the rocks.

We are fishing 12 to 15 pound test line with a heavier fluorocarbon shock leader, but I would bring a few short wire leaders along for those days when you find yourself covered up with Spanish mackerel. The heavyweight predators that share this stretch of water do not know that you are targeting trout and redfish, but opting for heavier equipment to deal with them only results in making casting more difficult.

When fishing the channel side of the jetties always be aware of the commercial traffic. If you are on anchor, tie a jug on the tag end, simply toss it overboard, and ride out the wake with your big engine. When it subsides, retrieve the jug and tie off again.

Should things settle down and dry out this month, look for the trout and redfish bite to start around the north and south revetment walls first. It should be a visual affair, as the gulls will once again hustle shad and shrimp forced to the surface by feeding fish.