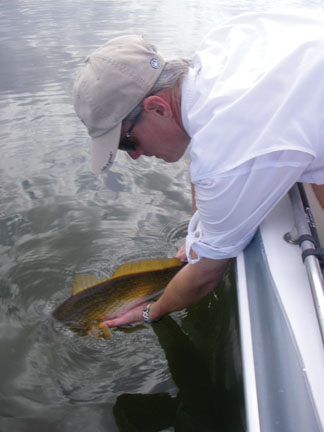 Brian Bommer releases a nice slot red to fight again.
Like anglers up and down the coast, we have yielded a few pounds to the oppressive heat and little or no cloud cover this summer, but the catching has not slowed down on Sabine since the wind decided to give it a rest in late May. Due to the minimal rainfall thus far, clearer water and elevated salinity levels have jump started the bite in both the Neches and Sabine Rivers as well.

The coveted conditions can be laid to waste overnight as we approach the heart of hurricane season, but should we escape a year of wind-blown misery, the fishing will only continue to improve throughout the fall months. Not to say that it hasn't already been good enough, but it is the trout bite that will show the greatest improvement.

As more shrimp begin to filter out of the marshes and join the shad buffet in the open lake, the birds will patrol feeding schools of fish from Blue Buck to East Pass all day long. When the feathered scouts aren't doing their thing, a single slick can keep you in fish with no one else around.

There will be those days when you will catch better fish working an Assassin or MirrOlure soft mullet on a heavier jighead below the smaller more aggressive trout. My first choices for duping the largest fish in the school, however, are a bone-chrome sided or pearl-chartreuse She Dog, a green or black back MirrOdine XL, or one of the afore-mentioned plastics fished beneath a Kwik Cork on a 24-inch leader.

We undoubtedly catch better numbers on the shorter paddle tail grubs like the Sea Shad or Soft Shad fished under the cork on a jighead, but I do much better on the heavier fish substituting the longer plastics rigged weightless on a Mustad 3/0 wide gap hook. When fishing over grass, I skin hook it to keep it weedless, but in open water, I simply thread it on the hook with the barb exposed. The larger trout and reds are attracted to the slurp of the cork and the slow sinking tail seals the deal.

The redfish have stolen the show on Sabine this summer and that will not change no matter how good the trout bite gets. We are covered up with slot fish and they are not lure shy. To target them is to simply go fishing right now.

The Louisiana shoreline kicks out limits every day to the spinnerbait, Gulp or 4-inch tails rigged on a jighead, and small crankbaits. If eye-popping strikes are your thing, stick with the She Dog or crawl a plastic frog across the surface. The north revetment wall and flats on the north end of the lake are no less productive for anglers relying not only on topwaters and plastics, but Traps and Hoginars as well.

I have been smitten with US Reel's spinning reels since the day I bought my first 230 SX and filled it with 20-pound braid and that love affair was recently reinforced. I had a reel with at least 400 trips on it suddenly become difficult to retrieve line with under any resistance. A client said that he had experienced the same thing and that really concerned me as a large percentage of repeat clients bought their own reels after using mine.

After cleaning my reel down to the bare metal and re-packing it twice, I could not cure the problem. Now comes the part that every fisherman longs to hear. I looked up US Reel's phone number on the internet and much to my surprise found myself talking to a real person rather than a recording.

That person was Maureen Dunn, Customer Support/ Office Administrator, and she not only patiently fielded my question, but took the time to connect me with a service tech. He was equally cordial and immediately pinpointed the problem as well as the easy fix.

"Check your line roller assembly," he suggested, "and keep it clean!"

The minor problem was not in the gears, but unseen corrosion causing the line roller and bushing to seize up on the bail. I removed one screw, cleaned the shaft, roller, and bushing, added a drop of oil and it was as good as new again.

These are great reels obviously backed by folks that are proud of their product and are willing to talk with fishermen. I bought another 240XL yesterday just to celebrate the positive experience!