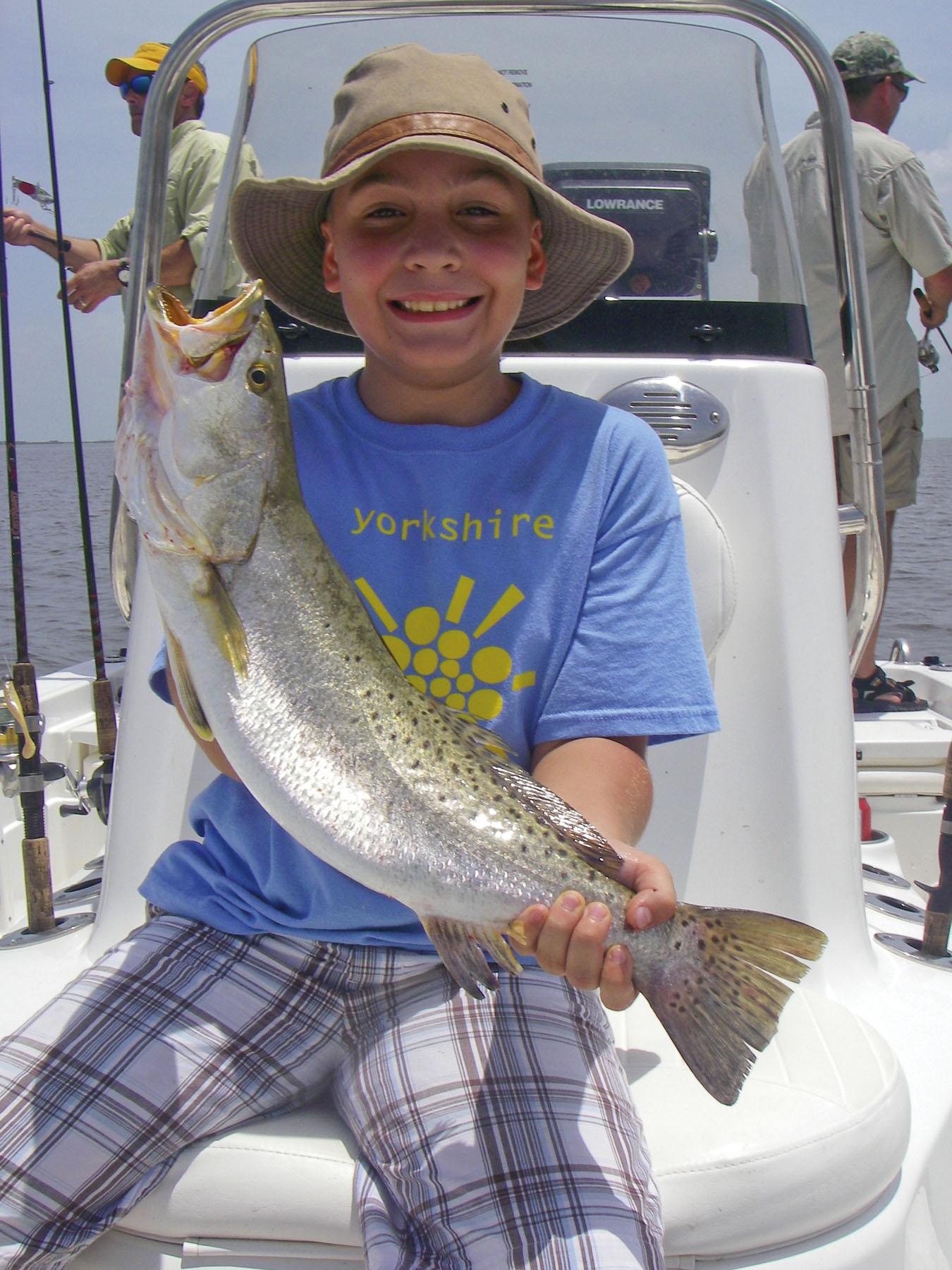 Cal Zackary with proof that there are some nice trout to be had as well.
The fishing on Sabine has been very good for those anglers unfazed by lengthy stops at the gas station at the end of the day. I have never fished more consecutive days than I have over the past two months, yet I am continually on the move in an effort to keep up with the fish.

Even as good as the catching has been and continues to be, the pressure has been incredibly light on the lake for no obvious reason. I can only attribute that blessing as far as guiding is concerned to the fact that we have run the gamut on weather conditions. The wind and lightning laced thunderstorms are show stoppers, but the heat is unmerciful with no breeze at all.

Even the incredibly good bite that we have centered most trips around has not necessarily been user friendly. At some point, somewhere on the lake, the redfish and trout are just going to go nuts every day. If you are there when it happens it is a slam dunk, but if you are not you return home wondering what all the hoopla is about!

This bite is not even relegated to any one particular section of the lake. I still start out each morning in the area I left the day before, but that does not mean the fish will show up again. It has been so iffy that when I have guides helping me with larger parties we will run opposite directions for fear of missing the bite.

Throughout the months of July and August, the hottest area continuously changed because it was a bite driven by redfish herding massive schools of shad. Once we begin to see more shrimp moving into the lake, the fish will not be as quick to scatter, but let's assume for right now that the current program continues into September.

The key for us has been to locate ladyfish banging away at the shad. The gulls and terns are helpful, but more often than not we are finding these fish without their help. Do not be concerned that you do not see reds or trout on the surface as wellthey are nearby!

The "go-to" combination that keeps us in the hunt for trout as well is a MirrOlure glow-chartreuse soft shad or Texas Roach Sea Shad fished on 2-feet of mono under an Assassin Kwik Cork. Other versions of this rig will work and other colors like bone diamond, hot chicken and chicken on a chain also work, but the first two colors are all but guaranteed right now.

Once you have caught more redfish than you thought possible switch to a topwater, smaller has been better on these fish, and enjoy some bodacious surface explosions. The Top Pup and Spook Jr. in both bone and chrome patterns are excellent choices.

The preferred method for fishing these smaller topwaters for us is to allow the lure to rest after a couple of short twitches. The ladyfish and smaller trout will peck away at it, but you just have to endure these pests. The fish that you are looking for is only a few feet away and she will demolish it once she is convinced it is the real deal.

The biggest mistake you can make is leaving the area should the bite slow down. The fish simply are not everywhere right now and you have to believe that you have narrowed the playing field. Until it picks back up, continue to drift with the cork rig, fan cast with a swimbait, or bounce a jig off the bottom, but do not leave for greener pastures.

I can't recall ever beating a single pattern to death like this, but I know of nothing else that has been so consistent and I want this column to be of some value to you. The other bite that I look to improve as we put another summer to rest will be wading the flats on the north end of the lake.

Each cool front will extend that action later into the day and there is no doubt that the average trout will be larger. You will still have to deal with the redfish, but if the mullet are in there on the tide changes so are the kind of trout that will slam a She Dog or Super Spook. Don't leave your Corkys or Catch V's in the boat either.

If we can continue to elude the brunt of any major storms the fall fishing should be crazy good around here. Take a kid fishing and never leave good manners at the dock!