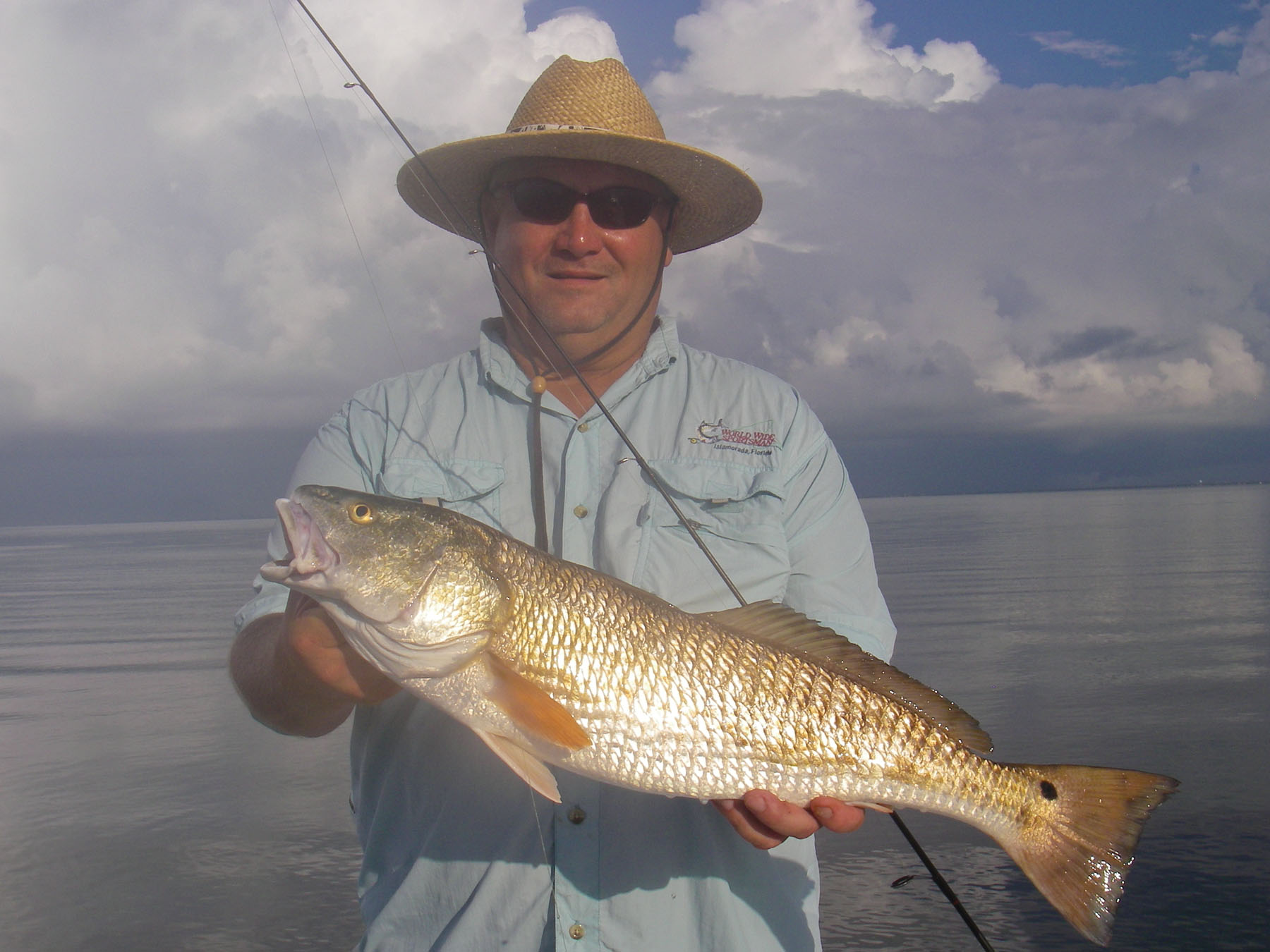 Steve Pullin with a nice red caught between thunderstorms.

One bad storm and we can go from drought conditions to evacuations on Sabine this time of the year, but we could not have ordered better weather than we have experienced since mid-July. It has rained nearly every day in the immediate area, but because lake levels on T-Bend and Rayburn are so low, excessive runoff has not been a problem.

Despite most of the shrimp holding up in surrounding marshes, the trout bite has still improved significantly with the influx of fresh water. We have yet to find gulls riding herd on school trout and reds in the open lake, but the more methodical approaches are yielding very satisfactory catches of trout up to six pounds.

Any time decent tide changes and moon phases align; early morning wades on the shallow flats have been very productive. When they will attack, but not bury a She Dog or Spook, we downsize to a She Pup or one of the new MirrOmullet XLs. Bone or black patterns as well as the Geaux Trout color worked on a slow retrieve have been hard to beat.

As expected, with acres of shad littering the surface, the gulls don't necessarily indicate the presence of feeding fish. On the other hand, small geysers and shad exploding into the air are a sure bet that the redfish are doing their thing. This bite is at its best during the mid-day hours or late afternoon.

Casting ability is far more important than choice of lures should you stumble up on one of these schools. I would recommend using something with a single hook as treble hooks can be a major inconvenience once the fish is in the boat. Do not run off once they go down as they will chase bait to the surface time and again if you stay off the big engine.

I don't ever recall throwing a Corky as much as we have this summer. We have been following up missed strikes and extending the morning bite with the floating Fat Boy and more recently with Tidal Surges new Maniac Mullet which behaves very much like a Corky Devil.

While I can think of no good reason for ever ignoring a fresh slick, you can absolutely make a day by targeting the oily spots, especially when they start popping up in numbers. The keys to fully exploiting this gift from Mother Nature are giving the trout what they want and staying upwind.

I cannot tell you how many times we have worn out a slick fishing a tail under a cork or swimming it on a light head with no success only to catch two or three solid trout on a topwater offering. It works that way in reverse as well and in some cases you only have to downsize your bait.

While fishing a tail will invariably generate more strikes, it also appeals to gafftops. For that one reason most of the more successful slick chasers start with the larger topwaters. I believe the best option is to find out what caused the slick before limiting your choices and a tail will usually do that best.

Opening night has been an exceptionally good color of late, but Assassins stinky pink and TTFs bug juice are not far behind. While a specific color is generally the only reason for fishing one quality tail versus another, the Assassin Die Dapper has been an exception to that rule. Rigged on a 1/16 ounce head, it fishes very much like a suspending hard bait and effectively bridges that gap for folks that just don't like fishing a Corky or MirrOlure.

Keith Lake, Bessie Heights and the marshes on the east side of the lake have also been very good recently. While a number of local anglers fish these marsh areas as a backup plan when the lake or the jetties are blown out, they have been worthy of Plan A status.

Redfish and flounder are usually the reason for probing these backwater areas, but the trout have been there as well. The lower salinity levels are preferred by the shrimp and the trout have discovered this as well. The same lures and tactics you use in the open lake work well along with spinner baits and small crankbaits.

Because these are shallow marshes, tide changes and submerged shell are a challenge for boats without a shallow draft. Bessie Heights also has more than its fair share of submerged pipe and well heads scattered throughout the back lakes. The marsh ponds on the east side of the lake are easier negotiated via the many bayous, but remember that the Game Reserve closes October 15th!