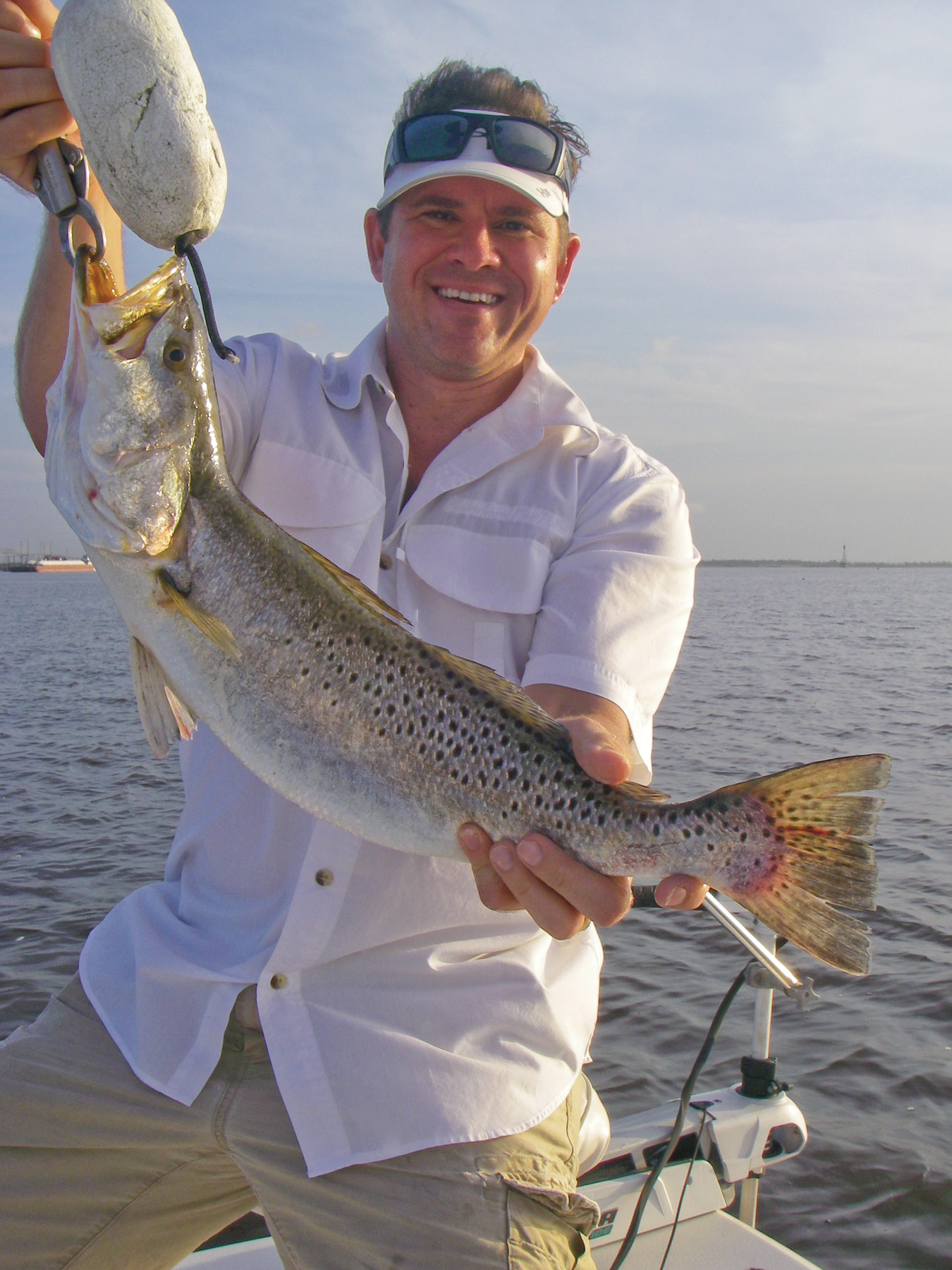 While much of the state continues to bake under blistering sun we have actually had a little too much rain. It started with four days of minor flooding all the way from Houston to Orange about the middle of the month and, as of today; it has rained on or around Sabine Lake sixteen days in a row.

The initial flooding temporarily washed out a trout bite that had us all thinking we were great fishermen but the excessive freshwater has finally been flushed out and each incoming tide has adequately compensated for the daily rains. The shrimp and menhaden are showing back up making the gulls an integral factor in daily game planning.

It is just the nature of Sabine Lake regulars to cuss the redfish, but like it or not they are doing their thing again and are taking a lot of the pressure off the trout. There is no need to target them as they will find you. They are cruising the flats, mixing with the trout under the gulls and at times churning the surface when herding shad in the open lake. If you just have redfish on the brain it is hard to beat the jetties and surrounding marshes, but don't overlook the Neches or Sabine River.

As we move into the fall, fishing for them with a crankbait in the rivers or bayous can be addicting. You will catch your share of solid trout as well, but the redfish find a 3 to 5 foot diver with a tight wobble like the River 2 Sea Biggie irresistible. Should that bite slow down, simply switch to a 3-inch swimbait like the Storm Wild Eye or River 2 Sea Live Eye and it's "game on" again. The swimbait also fools some of our larger flounder every fall as well!

GULP and the Hoginar pretty much rule the roost down at the jetties, but deep diving crankbaits like Strike Pro's Warmouth Wobbler have resulted in several tournament wins this year. It takes a lot of persistence and a lot of rod to keep them bumping the deeper rocks, but that program has worked on upper-slot fish when all else fails.

Long casts and stealth are important when fishing the shallow back lakes. There are days when they will torpedo anything from a buzzbait to a slow-walking She Dog, but crawling a weedless spoon or plastic frog over the floating vegetation gets my vote. When they will hit none of the above, try pitching a Texas-rigged tube jig soaked in one of Pro-Cure's scents and twitch it just enough to get their attention.

There is no surer bet right now for trout fishermen looking for eating-size fish than taking advantage of the birds. The best case scenario is to find needlefish and ladyfish hammering away at the shad on the surface as the better trout will be there eating them as well.

It is no secret that my first choice when exploiting the gulls is a 4-inch tail hanging below a Kwik Cork. It casts easily, makes just the right noise and keeps the lure in the strike zone at all times. Color is usually not as important as the length of the tail or whether to rig it on an 1/8 ounce jig or a 3/0 Mustad Wide Gap hook. Either way, we literally fish our way through pounds of Assassin Sea Shads and TTF Flats Minnows this time of year.

Any time they will eat a topwater, I start with a She Dog in a bone/silver or Geaux Daley pattern and we have also caught some of our biggest trout recently on the larger Spook and TTF Flush. Black/ chartreuse head and pink/silver have been the best colors for us in the larger lures.

When the ladyfish won't leave a topwater alone, try rigging an Assassin Die Dapper on a 1/16 ounce head. Chunk it into the melee and retrieve it very slowly in short twitches. Don't set the hook when the smaller fish peck at it as that seems to attract the larger fish waiting below for an easy meal to sink their way. My hottest color has been sand trout or opening night with a chartreuse-dipped tail.

They are not lures that I normally fish this time of the year as it is difficult for me to bench my time-tested MirrOdine XL when the trout on the deeper flats get finicky, but we have done surprisingly well with the Corky Devil and slow sinking Maniac Mullet this summer. We are able to fish them a little faster than the XL and at times that has made a difference.

You just have to go to know!