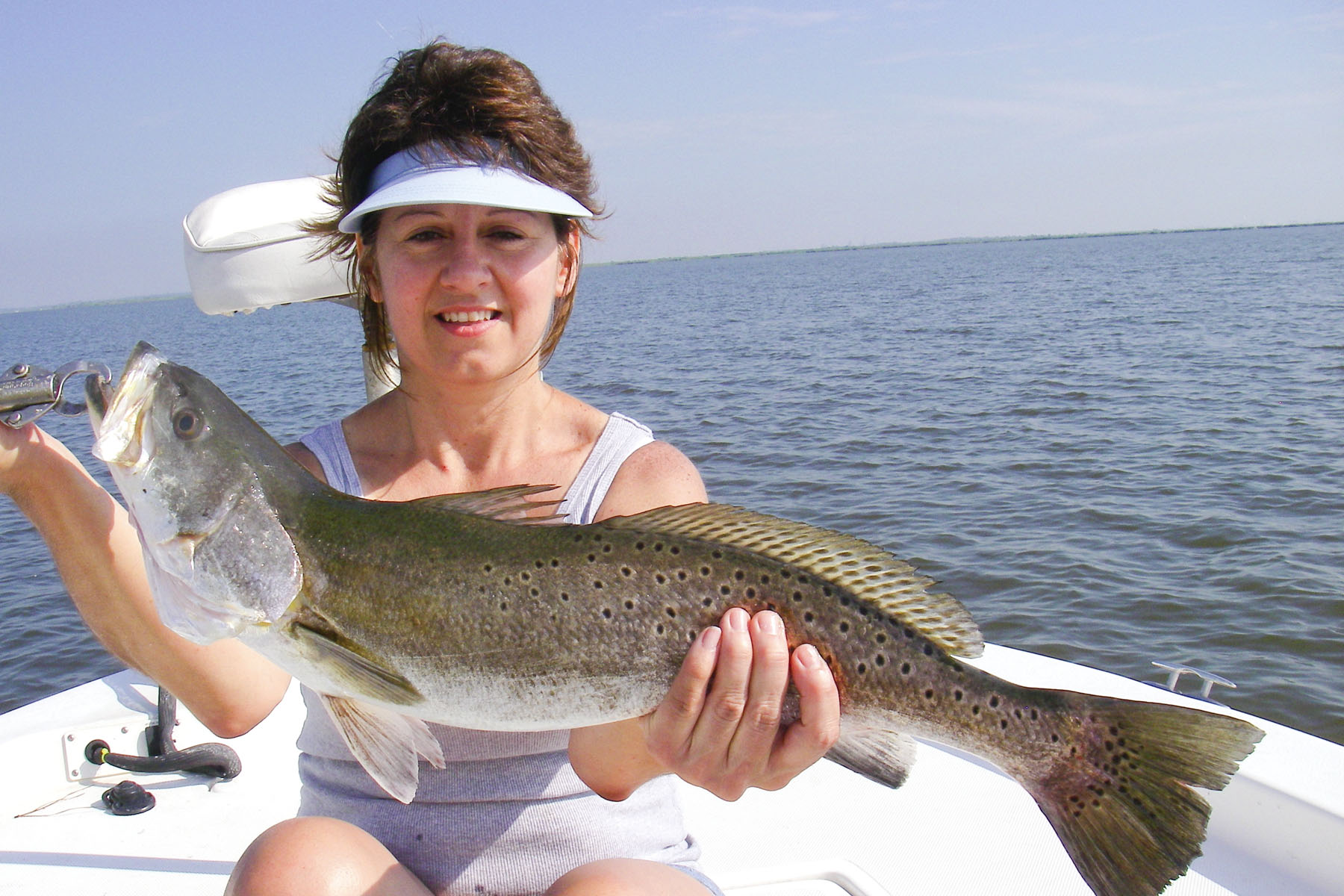 Cindy Malone fooled this beautiful trout with a VuDu shrimp under a popping cork. C&R!
Long ago I grudgingly accepted that someone is usually catching fish even when I am struggling but the past month has really been a grind for me. Coming on the heels of six months of fantastic catching, any slow down at all would have seemed significant.

The results of my time spent fishing each month, however, are in reality just a snippet of the big picture on Sabine. My trips are tailored to what my clients "can and want to do" rather than possibly exploiting a potentially more productive pattern. The fact that anything south of the Causeway may as well be on another planet as far as I am concerned also somewhat narrows my scope as I prefer the rivers over the Gulf.

Now, having laid the slower bite off to everything but my own diminishing skills, the good news is that we should have a lot to look forward to by the time you receive this magazine. Our water is in great shape and the fish are there, but much of our struggle up to now has been wind related. Every time the lake goes flat overnight the gulls work over schools of shad and surfacing shrimp the following day.

If a shot at fewer but larger trout is your thing, I would tie on a She Dog or Spook and wade or drift the two to four foot flats on the north end of the lake at or before first light. As that bite slows, move a little further into the lake rather than retreating to the deeper water in the Intracoastal. A switch to a 5-inch Assassin Shad or MirrOdine XL will also extend your chances at fooling a big trout.

Most visiting anglers migrate to Sabine this month to chase gulls and hopefully stumble up on huge schools of surface feeding redfish. Even if that is the purpose of your mission I would still burn the first hour of daylight fishing main lake points all the way from Blue Buck to Middle Pass.

When blessed with a decent tide you may well limit before the gulls are even awake. Look for both trout and redfish blowing holes in the parade of shad and shrimp moving across these points. The points with shell hold the bait and fish a little longer, but any point with quick access to deeper water will do.

For pure enjoyment you can't beat a smaller topwater like the She Pup, but for numbers it is hard to beat a 3-inch Usual Suspect swimbait or a smaller tail or shrimp imitation shrimp under a popping cork. When shad are the main entree I do best with a small paddletail grub like the Sea Shad or Flats Minnow under the cork, but a VuDu Shrimp in Natural or Tiger is hard to beat when the shrimp are getting pounded.

It is also not unusual for redfish to school early in the day, especially on the south end, so keep an eye out for small groups of birds or absolute surface mayhem while fishing this early morning bite. As the day wears on, look for the more consistent bite on both trout and redfish to take place in the middle portion of the lake. A light wind actually helps as it easier to see slicks and cooler to boot.

Never abandon a slick just because the first fish that inhaled your topwater was a gafftop. Two or three in a row will put me on the move, but I often catch some very nice trout and redfish by switching to a Hoginar or 5-inch tail. We are doing much better with the longer tails like the Assassin Shad, Trout Killer or a Tidal Surge Split Tail.

The flounder bite never really slowed all summer and will get even better as we move into fall. The canals in the Game Reserve have just been on fire; Black's Bayou and Madam Johnson's have been productive as well. Until the flounder start their annual migration, the main points along the river and Intracoastal will also give up solid flat fish to live bait anglers.

I have been asked several times over the past month about the use of live croaker as a solution to our recent lull in the action and while I know they work at times when nothing else will, my answer is, "That is just not my bag." Each to their own, but the modest benefits are not worth the apparent hassle for me.

As Capt. Chuck has always contended, we stay one step behind here on Sabine as seemingly every new and innovative technique slowly creeps its way north from the lower coast. In this instance, however, I will take my croaker filleted and fried.