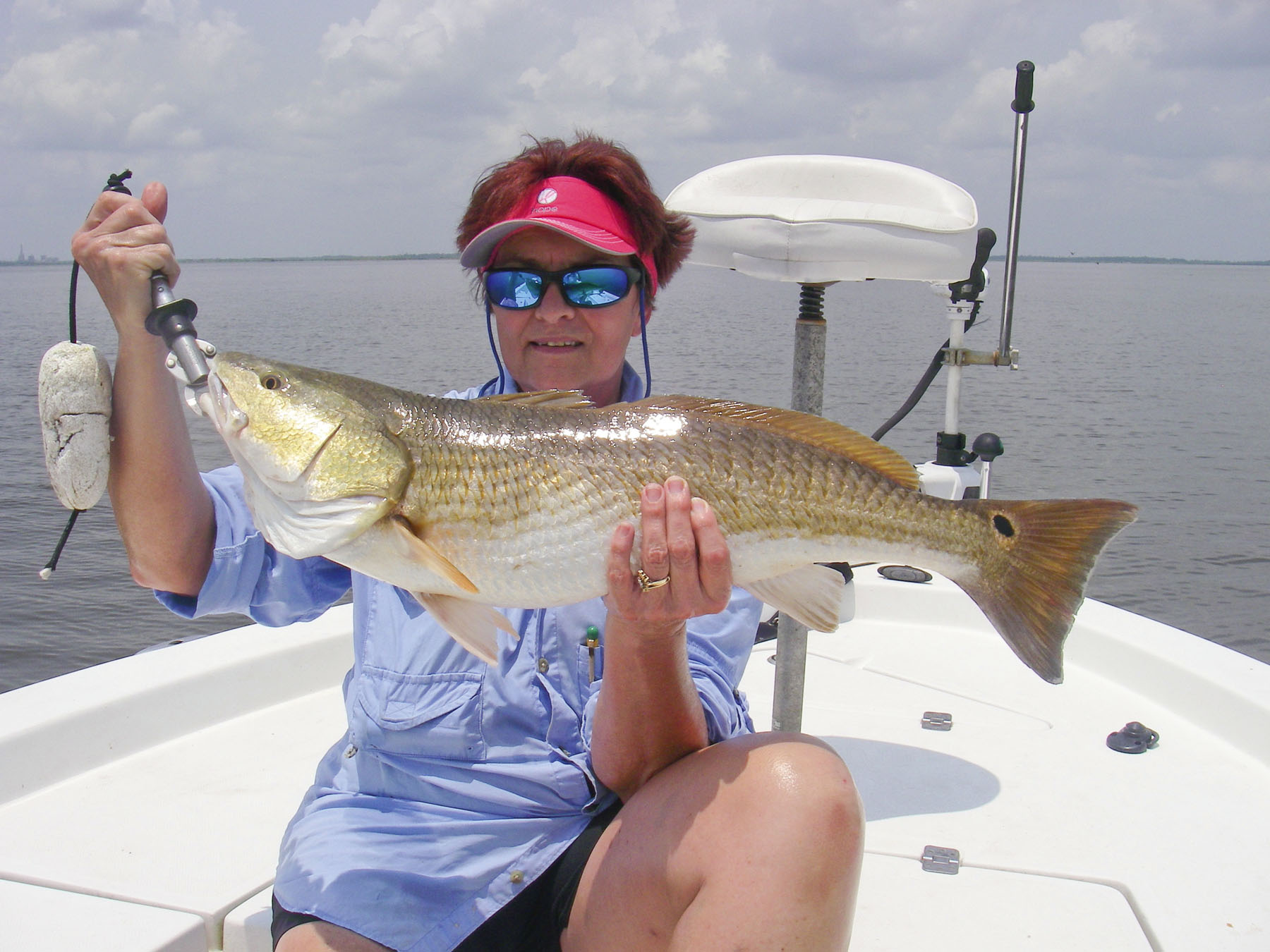 Elaine Cunningham took advantage of the calm conditions. CPR
Catching has not been as consistent as we expect this time of year, but with more user-friendly wind we are taking advantage of several different patterns. Gulls are ratting out schools of reds and solid trout in the open lake and pre-dawn wades are yielding some very nice trout.

The only fly in the ointment has been fresh inflow negatively impacting the north end of the lake. Even at that, it probably hurts angler confidence more than the actual bite!

Prior to putting too much stock in my reports it is important that you understand; my assessment of Sabine fishing is sometimes flawed by my election to basically ignore any bite south of the Causeway. There is almost always something good going on in the ship channel all the way to the end of the jetties, even when I am struggling in the lake and the river.

On the rare occasions when I do fish down there, I am amazed by all of the options, but logistically it is a nightmare from a guiding standpoint. Launching and tying up the boat alone to wait on clients is all but impossible at any of the launches and cleaning your catch on the tail gate in the parking lot does not appeal to me at all.

There are, however, a number of very good guides more than willing to put up with those inconveniences. Many will even launch on the Louisiana side so that you can keep more liberal Louisiana limits. I will be happy to pass along their names and numbers if you will email or give me a call.

While floating seaweed has been a bit of a problem with topwaters, I can tell you the ship channel and the east side of the jetties has been on fire for trout and redfish. The much anticipated flounder bite is also swinging into gear from the LNG terminal to Light House Cove. It took two flounder that totaled almost eleven pounds to win the Cops Helping Kids Tournament last month!

As far as I am concerned, the best news is that an easier bite in the lake has shown signs of exploding lately. Huge schools of redfish are blasting ribbonfish daily on the surface and you don't need screeching gulls to locate them. You can both see and hear them from quite a distance.

In a best case scenario, big sand trout and 3- to 4 pound specks are also in the mix. Long after the redfish have gorged and moved on, the trout will continue feeding on everything from small shad to shrimp. It is always a mistake to run off the moment the gulls leave or the surface activity ceases.

While She Dogs and Spooks are easily the most exciting lures to toss into the melee, I am more confident with five inch tails like the Assassin Sea Shad and Tidal Surge Spit Tail, or a slow-cranked four inch H&H Usual Suspect. As we move into the fall, 5-inch tails still tend to work better than four-inch for me, but the three inch swimbait usually out performs the larger version.

Once the trout start driving shrimp to the surface on the north end, we throw the heck out of a cork with a Vudu shrimp or four inch paddle-tail Sea Shad or Flats Minnow. Leaders should be two feet of 30 pound mono. Attaching the lure with a loop knot will generate more strikes.

I fish the cork on spinning gear simply because I can throw it farther with less effort, even in a stiff wind. Twenty pound braid makes for quicker hooksets and handles nicely on a 2500 or 3000 series reel. I have found no better rod for this type of fishing than a Laguna Liquid Series 7-ft medium action.

This is the time of year we start most of our trips well before daylight as long as tides are in our favor. It is not unusual to catch our largest trout before most folks arrive at the dock. Depending on client preference, we will either drift or wade the skinny water bordering the ICW. A black/chartreuse She Dog is invariably my first choice, but regardless of color it will be a topwater.

Switching to a swimbait or tail will quickly determine whether the fish are backing off into the ICW or following the bait across the shallow flats in the lake. More often than not, this time of the year, they are moving into the lake and that is very much in your favor.

Schools in... But the kids can still fish with you on weekends.