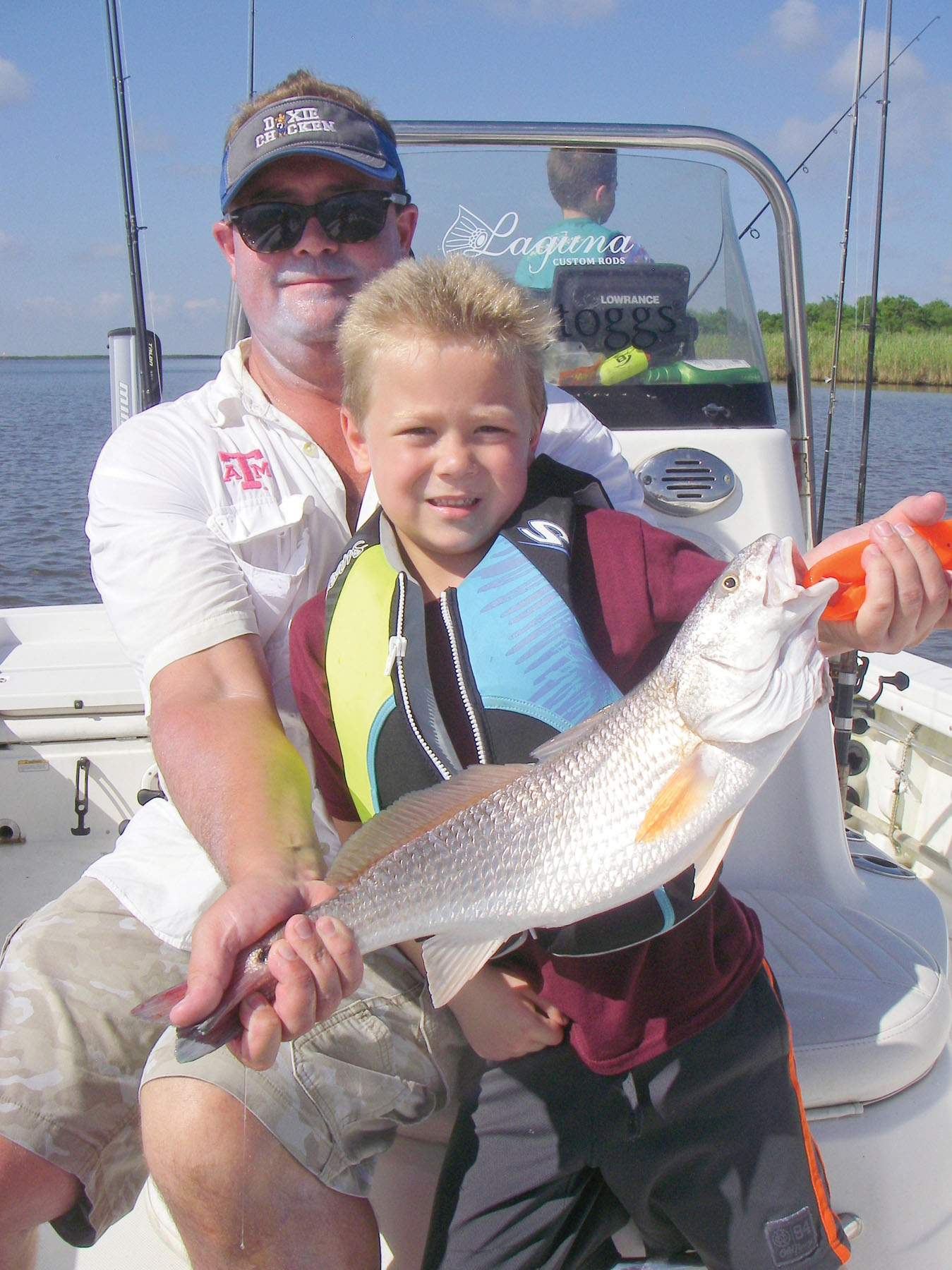 Dad was obviously proud of his son's first slot red!
While the catching on every bay system has suffered due to all of the fresh water, aside from what I've seen of Trinity bay, I can't believe that any of them took the prolonged hit that we continue to experience on Sabine Lake. We are still not back to normal even after several consecutive weeks of little or no rain, but there are finally signs indicating that things are about to turn around.

It is not like I haven't explored every proposed solution while in the process of learning a helluva lot more than I ever cared to know about salinity levels and what a trout can or cannot tolerate. If the person responsible for reporting these levels is reliable then I second the premise that trout pack up and leave when the salinity dips below 5 parts per thousand. I also assure you that they are very leery about returning to their old haunts!

Fortunately, in our case, leaving was simply a matter of abandoning the salinity-depleted shallow water in the lake for nearby sustainable salinity levels in the deeper water of the rivers and the ICW. Rather than pack up and retreat to the Gulf, they did exactly what they do when riding out the colder water in the winter months. All of which means that if conditions continue to improve, the bite could just explode all over the lake in less than a week's time!

Local anglers are already catching good numbers of 16 to 20 inch trout fishing under the lights on the Sabine and Neches at night. These fish are chasing shrimp and shad to the surface only to return to more comfortable depths during the day. Much of this action is taking place just a short swim off the main lake.

Until these fish decide all is well in the lake, your best opportunity for dining on fried trout requires joining the crowds on the extreme south-end of the lake or prospecting the deeper waters of the ICW. Everything south of the Causeway is still getting heavily pressured on a daily basis, but scattered shell as far north as Garrisons is now holding more fish as are both revetment walls.

In spite of realizing that at least fifty percent of the lake is currently a wasteland as far as catching trout is concerned, I continue to launch on the extreme north-end every morning and fish my way south.

Rarely do I ever even see another boat, but it gives me an opportunity to check areas that will be the first to improve.

Most of our trout in the southern portion of the lake are holding in 6 to 10 feet of water over isolated shell. They will suspend on a big tide change at times and just crush a Catch 2000 or Usual Suspect swimbait, but for the most part we are crawling tails over that shell. We have done well with four inch paddle tails like the Die Dapper and Sea Shad as well as the five-inch Tidal Surge Split Tail.

Regardless of water clarity, which usually affects angler confidence more than fish, we are catching most of our trout on chicken on a chain, red shad and morning glory. In addition, we have had some ridiculously good outings with a purple demon Lil' John rigged on 1/8 ounce Assassin swimbait hooks.

I don't know if it simply took local anglers a long time to buy in or whatever, but I have never seen as many folks fishing live croaker on Sabine Lake as I have this year and they are predictably catching the larger trout. As a matter of fact, the last three tournaments on the lake were won by folks fishing with live croaker.

Easily the most dependable action, especially for someone that spends as much time on the north end of the lake as I do, has been the redfish bite. While the high water scattered them and they are not yet schooling in the open lake, they are still hammering away at both tails and hardbaits in the bayous and the marsh. We have also had some very good days catching them under rafts of mullet ganged up along the shoreline of the ICW. An outgoing tide has produced the most consistent action.

I am starting to feel like the rescue dog that never finds anyone alive, but I am convinced that we are getting really close and writing next month's column will be far more enjoyable. Until then, there is still time to get the kids on the lake before school starts, but don't dare bring them back to Mom all sunburned!