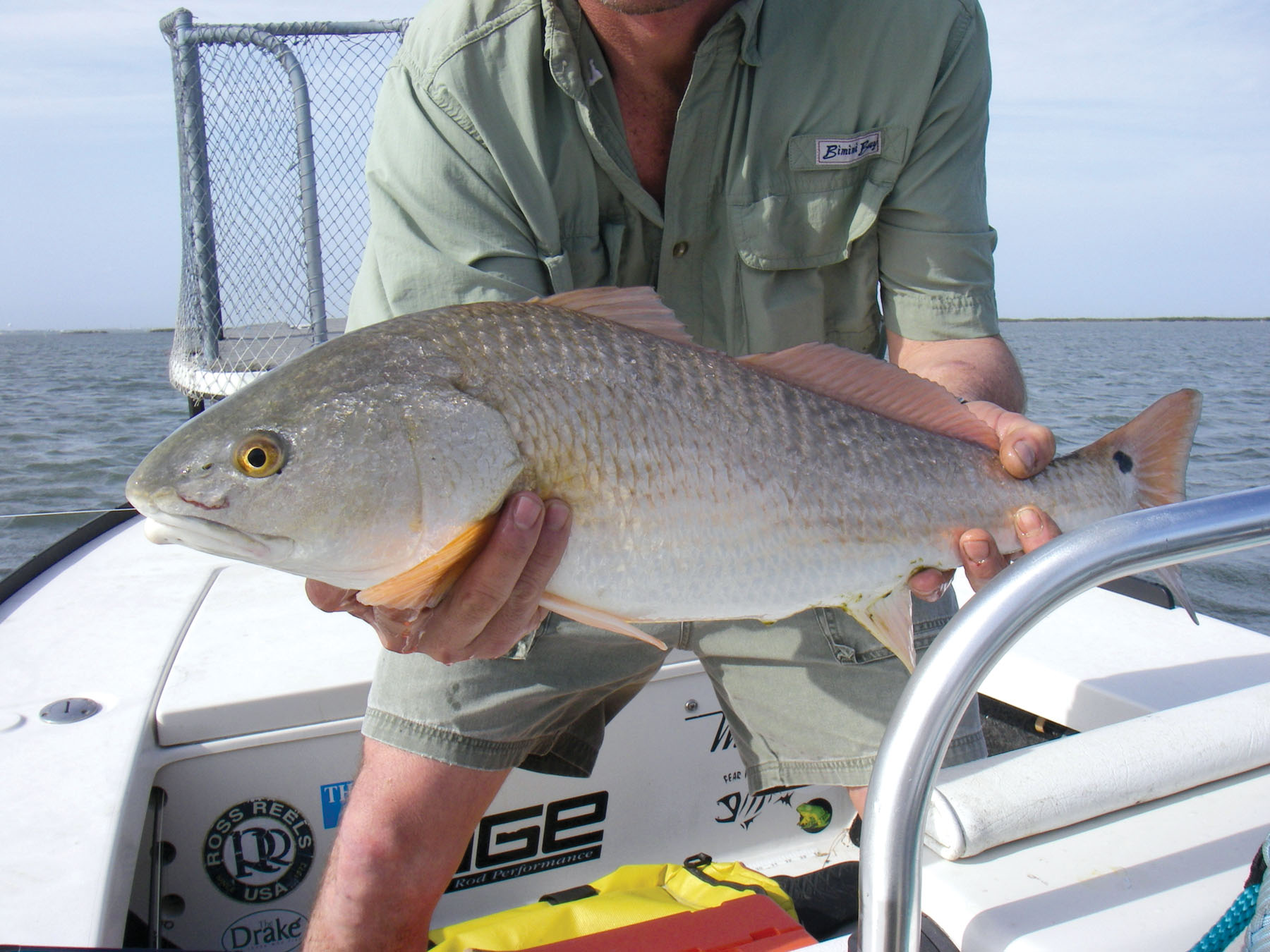 Fishing is picking up around here and it's my kind of fishing. There are a lot of fish up shallow and wade fishing has been good. We've had a mild winter and the water temperature is averaging 60 degrees and above and that always brings consistent fishing. We have had a lot of redfish running in knee deep water. On calm days we have also found reds around deeper mid-bay reefs when we can get out there and work. There has already been some bird action going on in East Bay and in Trinity Bay and we have found several big herds of reds and a few trout under them. We have a lot of trout staging in the two to five foot depths along the flats.

Trinity Bay
Redfish action in Trinity is excellent right now. We have a fairly strong flow of freshwater from the river and that is a good thing for this time of year. It seems to stage the fish along main bay shorelines which is just the ticket for waders. At present we are still experiencing a lot of north wind. As we get further into spring we'll see the northers farther apart and a steady increase of south wind. Until this pattern evolves into steady southerly flow we'll be bouncing from one side of the bay to the other for protection. A lot of the fish we're catching right now are showing little sign and we are keying on the mullet. If you can find the mullet real active there is a good chance of finding a good school of trout there too. We have not seen many big trout yet although solid five pounders are beginning to show and every once in a while we hear of a seven. Soft plastics have been the go-to bait. Saltwater Assassins and Norton Sand Eels have been working and darker colors seem best. When the water is real clear we have been using H&H Cocahoe minnows and Norton Bull Minnows, white with the chartreuse tail has been good.

East Bay
There have been good numbers of trout hanging in the northeast corner by the wildlife refuge, including a couple of seven pounders on Corky baits and soft plastic. There has been some bird action along the north shoreline in about six feet of water. It has been inconsistent so far but while you are wade fishing you can see them start to work and you can run out there and hit them. If you hit the right school you can catch about twenty or even thirty keepers pretty quick, there a lot of small fish, though. In springtime the water temperature on the south shore always warms later than the north shore. As a result the trout there tend to run smaller this time of year, sixteen to eighteen inches is a good one. I have received reports of plentiful redfish up in the back of East Bay around Oyster Bayou and Grassy Point. You have to catch the wind just right out there. You either need a north wind or just after a norther to really get on those fish. You also need some water, which means it's soometimes better before the front than after it. There have been some big fish caught behind Rollover Pass. They are fishing the gut behind the pass where the eddie and tide pool are. It is deep. They are getting in there before the fronts when the south wind has the water pushed up. Current is the key here, coming or going. It takes a gum ball jighead to get a lure down in that hard current. Over the years I know of an eleven pound trout and several tens to come from that area, it can be like Baffin when it gets right. This will all change once it starts to warm and we get into true spring. That's when the big trout will congregate behind San Luis Pass.

West Bay
You are set for wade fishing along the south shoreline in all the coves over there. Reports indicate that the bite has been real early and real late, the first hour of daylight and an hour before dark. There have been some good trout in these coves, up to seven pounds. Mirrolures, Corky's and soft plastics have all worked depending upon the conditions. Most of the coves on the middle part of the island from Star Basin to Karankawa Cove are holding fish but they are moving with the weather and water conditions. One day one cove will be hot then it is another. Drift fishing is still a little spotty in the middle. You will find streaking water behind Confederate Reef and over by North Deer Island. If you find bait in there you can catch fish running two to three pounds drifting with soft plastics. As far as redfish, there have been some pretty good schools down by Shell Island and Karankawa Reef.

Upper Galveston Bay
Seabrook Flats has been producing some decent trout on Mirrolures and Corky's. Reports indicate some fish up to five and six pounds. All of this is normal for this time of year. There has also been some decent flounder action on the edges of the flats with soft plastics.

Springtime is upon us and the patterns are beginning to unfold. Hopefully next month I can say it is all wide open. All things considered we're doing well for this time of year. In summary I'd say we're in for a good spring fishing season.