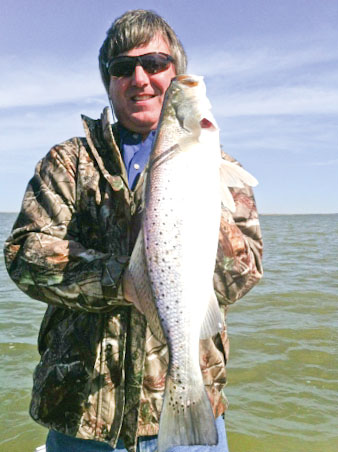 Terry Buckner shows off a nice Trinity Bay speck on a sunny March afternoon.
The month of February and thus far into March has been nothing less than a weather roller coaster for Galveston Bay fisherman. April should prove to be a lot friendlier once these frontal systems start to play out and spring kicks in. Spring winds, even though strong at times, are usually quite fishable as long as they blow out of the same direction for longer periods of time. Consistent wind direction allows us to establish a pattern on the fish and we can deal with whatever else comes our way on a day to day basis.

Moon phases, tides, water clarity, and an abundance of baitfish are without a doubt the primary building blocks for good fishing this time of year. Structure plays an important role for holding fish to certain areas whether it's shallow towheads along shorelines, points, dropoffs, or even guts leading into your favorite cove or bayou. These areas become frequently traveled highways for specks and reds, and most importantly of all - baitfish. If the baitfish are there the fish will come sooner or later.

The springtime shoreline bite can range from feast to famine, too much famine in fact, when we are trying to unravel the pattern. Timing is never more important than early spring and this can really weigh heavily on a fisherman's patience. Some days the bite can be early and other days late, this drives me nuts trying to narrow it down to a specific timeframe. The best days of course are when the fish bite all day as this allows you to move around and try different strategies and locate more fish, which in turn leads to greater understanding of the rapidly changing patterns. Once you've been fortunate enough to have that great day, you have more options and you are able to patiently sit on a spot and really fish for that big bite, because you know the fish are there. Without that confidence you can worry yourself sick second guessing every move.

Confidence is everything when it comes to catching big springtime fish. Throwing your favorite lure or the one you know how to work the best is a big factor in successful outings. As these frontal systems approach the coast and stall out we experience pumping southerly winds that can last for days if not weeks. Protected shorelines are our only options for making a day on the water. Open water becomes muddy and sooner or later everything moves to the shallow flats. Being able to read the signs offered by feeding fish are keys to catching fish on a consistent basis.

A few flipping mullet, big rafts of mullet, pods of shad, schools of glass minnows, and slicks are what I look for this time of year. Color changes and tide lines on flats adjacent to deep water also play a roll in catching fish on breezy spring days. Wade fisherman live for these kinds of conditions because it keeps most of your boat fisherman off the water and allows the fish to stage better with reduced pressure of boats running every which way. When frontal systems stall we sometimes see moderate southerly flows varying from due east, southeast, and then to hard-pumping south all in one day. Knowing what bays and shorelines of these bays are best for the various wind directions is very important.

For a pumping south wind it's tough to beat East Bay because it has more miles of shoreline with the right structure and the fish bite good in this bay on hard south wind. West Bay is often good as well with some of its coves lying protected on a due south but for the most part I like West Bay with some east in the wind. The fish bite better and the tides bull up in the back of the coves better. My all-time top choice with east in the wind is the east shoreline of Trinity Bay. On a pumping south in Trinity Bay you can find decent water in places but the fish will not light-off and give you a strong bite. A pumping east wind on this shoreline is absolutely the best for the right tidal movement, water clarity, and all-around fish-ability. For whatever reason fish just tend to bite hard on an east wind in Trinity Bay. Play the winds and work these shorelines hard throughout the spring and it will spell success for most and, who knows, that double digit fish could be waiting for you around the next point, towhead, cove, or bayou when you least expect it.