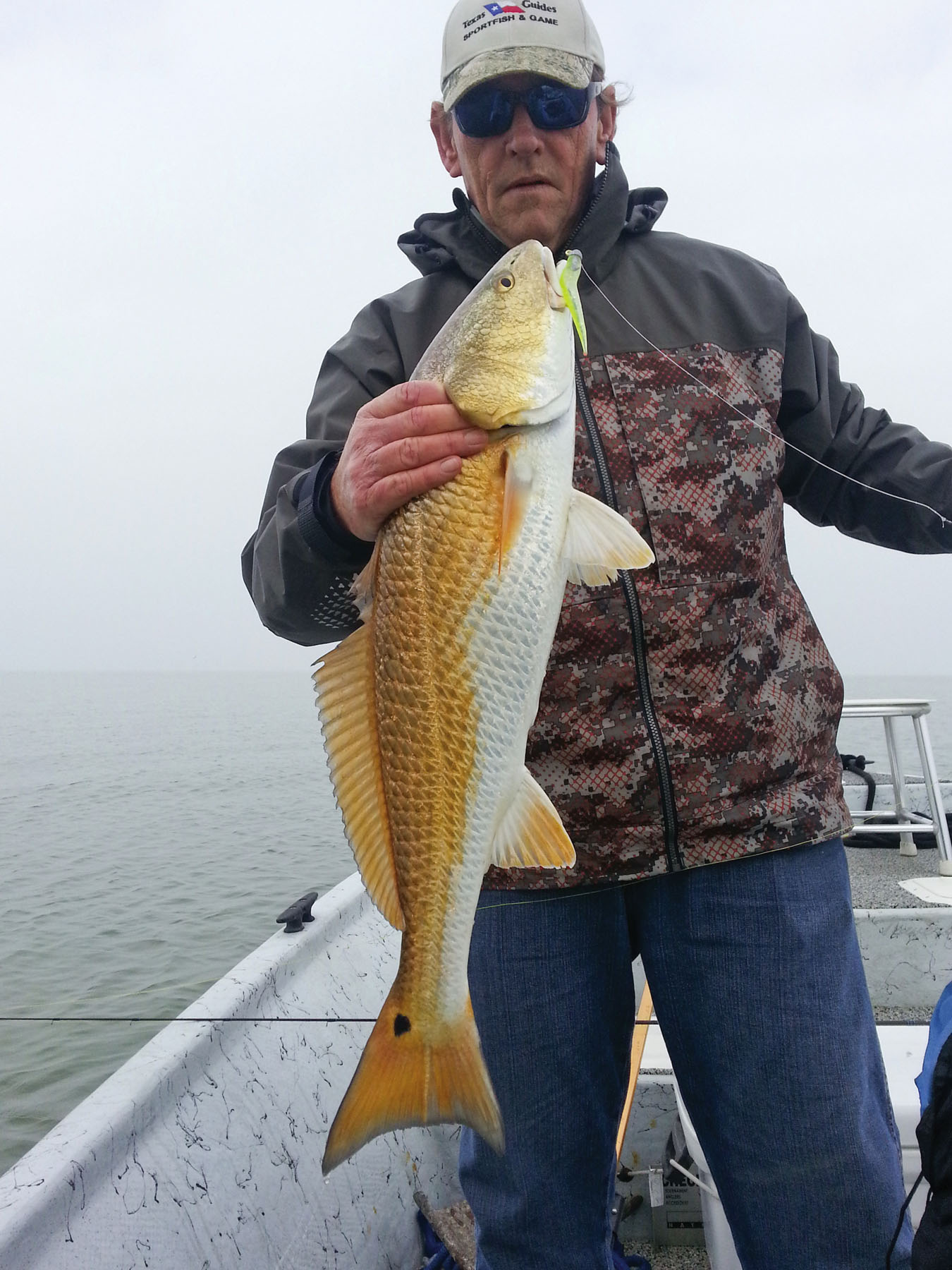 Just as we thought we were about to settle into a solid springtime pattern with warming flats, abundant baitfish, sunny days, and great shallow water fishingOld Man Winter came riding back into town bringing yet another blast of cold and wet arctic air. Water temperatures plummeted nearly twenty degrees in less than twenty-four hours and I don't have to tell you how disappointed all the already cabin-fevered anglers are, facing the probability of a two- to three-week setback.

The good news is that it will warm up again and we really have a lot of fish, and the same pattern will work again. For a really good ten day stretch we were catching big numbers of redfish and trout on the warming, shallow flats of the entire Galveston Bay complex. Magic depths for the trout was about two- and a half to three- and a half feet of water. Redfish herds were holding in five to six feet of water and on warmer afternoons the shallower pods of reds were venturing into less than two foot depths. I call that a solid springtime pattern on this bay system. The photos I included here were made on an afternoon when we could have literally filled the boat with Trinity Bay "toad" redfish.

It became a very routine pattern to stick with day in and day out. Boat fishing consisted of soft plastics like the Lil John from MirrOlure in Blue Moon on an 1/8 ounce jig with a Corky or Maniac Mullet here and there, depending where the fish were in the water column. Wade fishing consisted of mostly Corky Fatboys, Maniac Mullets, and topwaters that were getting slammed on a daily basis. About every three days we would get into trout that included quite a few fish over the twenty five inch limit. When I see this I cannot help but think we are in for an epic spring season, maybe the best ever, and I believe it has a lot to do with the long and cold winter we just came through.

Most of these fish are coming on flats with dropoffs and ledges coated with oyster shell or clamshell on soft bottom. These bottoms are holding the warmest water temperatures with the most baitfish, and of course the predator species are reacting to the situation as they most always do.

Water temperature, water clarity, and abundance of baitfish are the key to holding both numbers and sizable fish this time of year. When I mention clarity I don't mean air-clear water; what I'm describing is what we call "trout green" clarity. That's the dark green water with about one- and a half to two feet of visibility. This gives baitfish just enough color density to feel safe in, and gives trout and redfish the perfect clarity to hunt and feed in. Most important of all it gives the angler great expectation of catching fish on lures on both overcast or sunny days.

These patterns have been pretty much the norm throughout the entire Galveston Bay complex. The biggest factor angler's have had to deal with is the extremely foggy conditions on warming trends after cold fronts and safe navigation in the fog should never be taken lightly. Bay waters have been extremely cool this year, and when the warm-ups occur on the southerly flows, sea fog has been a menace. It makes wade fishing a little intense on flats exposed to boat traffic.

Most days I've been staying in the boat until the fog lifts and then begin wading for the remainder of the trip. Redfishing has been phenomenal and so has the trout fishing with a few tipping the scale toward nine pounds. With the prevailing excellent water conditions we've been seeing, once we reach a stable weather pattern I'm positive we are going to see excellent fishing throughout the rest of the spring months.

Looks like a very good year of fishing ahead of us; be safe and courteous out there and good luck!