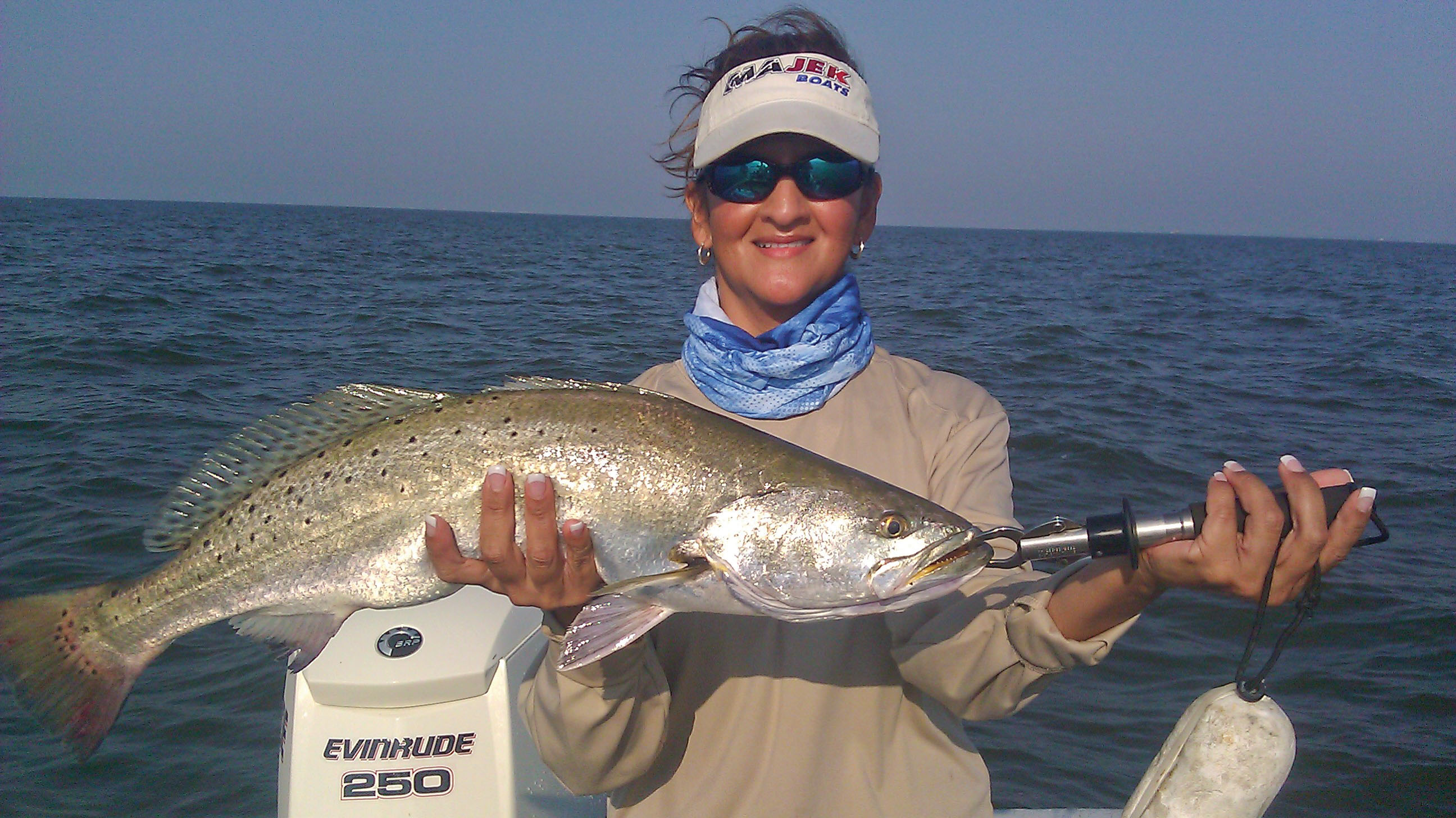 We have had some calm weather across the Galveston Bays region and some really good catches, so things are looking up. I would say probably East Bay continues to be the best for speckled trout. All the deepest reefs over there, from Hanna Reef on back to Deep Reef, Middle Reef, Drum Reef and Frenchy's has been holding some really good fish. They are crowded though and I haven't been messing with it much as I have been staying over here in Trinity Bay. There are fewer boats and the fish are moving back up the middle of Trinity now that the water conditions and salinity have improved following the big flood we had this spring.

Everybody I talk to is doing real well in East Bay. They are targeting slicks, mud boils for reds, running the bait schools, the whole nine yards. Tide changes are critical whether it is coming or going and, favorable wind is always in the equation when targeting open-water shell. There have been a lot of four and five pound trout taken consistently. Redfish have been plentiful along the north shoreline and the top end of East Bay and they are running the shad. Look for them over mud in 3-5 feet of water. Be patient and use your trolling motor.

The Ship Channel is producing lots of trout. The croaker guys, especially the guides, are getting daily limits. Lures are working too but it is not a gimme - decent catches of trout and reds can be made working the slicks and bait if you are patient. Unusual the number of redfish holding on the channel this summer. I think it is due to the ribbonfish, there are huge schools and the redfish are just gorging on them. It is a beautiful sight when the reds push ribbonfish to the surface; it gets pretty crazy. I think you could throw a screwdriver into the frenzy and catch a redfish.

Over in Texas City and lower Galveston Bay there are good numbers of trout coming from Dollar Reef and Texas City Flats and off Skyline Drive. A lot of guys have been doing well parking their cars and wading toward Mosquito Island and Texas City Flats. I have heard of some six and seven pounders from over there so it must be good.

The Galveston Jetties are giving up some very nice trout this summer. I spoke with an eleven-year-old on my radio show last Sunday. He weighed in a 7lb-9oz trout and is leading the Upper Coast CCA STAR Teens. It is always gratifying to see these youngsters into fishing like he is.

Over here in Trinity Bay, for several weeks now, our best trout action has been coming from the gas wells. Back when this started we were pulling a lot of solid females in the four-to-five pound class with an occasional six or seven, but now the males have moved in with them so they must be spawning. A variety of soft plastics have been working. One day the MirrOlure Lil John will be hot and the next day the Voodoo Shad or Tidal Surge Split Tail. What it boils down to is we have been getting them on whatever you like to throw. There was one day we caught them on MirrOdines, just slow-rolling them off the edge of the well pads about three to four feet below the surface.

When we get our fill of trout fishing I start looking for mud boils the reds are making and also keying on terns. Most of this action is in anywhere from six to nine feet of open water, not associated with any specific type of structure other than mud bottom. Those greater terns will get over the fish and they will not leave; this makes them very reliable indicators. I had a day last week where the reds came to the top like goldfish swimming around and that was real beautiful and cool to watch.

The last couple of weeks have provided very realistic opportunity for double limits when everything goes our way. When the wind gets up though, it is a different ballgame out there in the middle of the bay, and you might as well figure out something else to try. We have had some really nice weather here lately and fishing has been fantastic. It seems like the hotter it gets and the more the wind lays - the better the fishing!