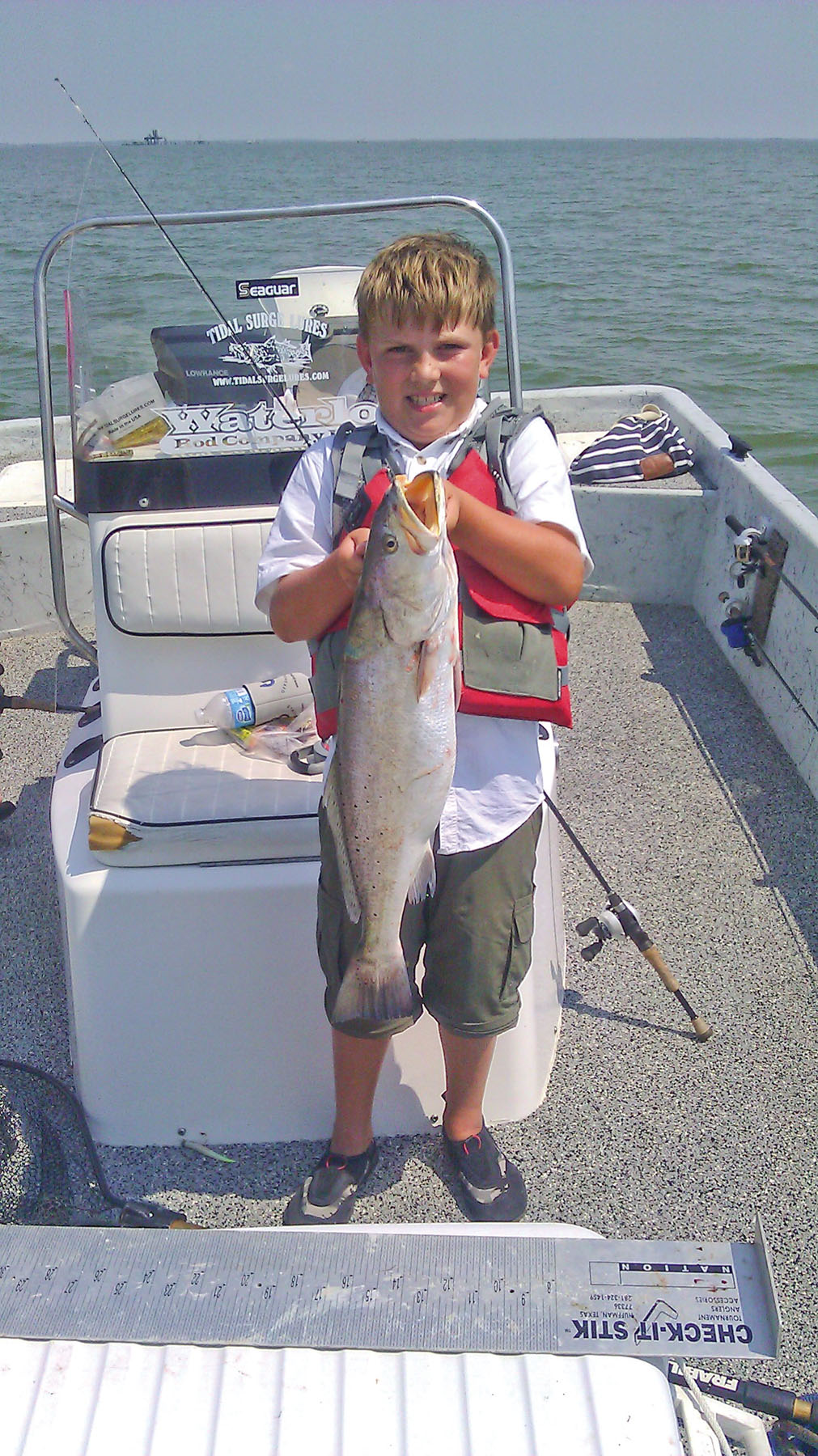 Family trips are a blast. Young Nathan shows off an incredible Trinity Bay summertime speck.
August can produce surprising results for any fisherman willing to be patient, pay attention to the tides, and put up with the heat. By the time August rolls around our bays have been replenished with tide-runners of various species that have entered through major passes and joined with resident bay fish. This not only increases the resident populations but also makes feeding schools easier to find. Quite often we find a collection of species that seem to roam and feed more or less as a unit; redfish, speckled trout, sand trout, black drum, gafftop, golden (Atlantic) croaker, and even an occasional shark or two when the action heats up. Find any one of the above and you may find all.

Various methods can be used to target them; live shrimp under a popping cork or a Carolina-rigged croaker along the bottom are popular summertime methods, although I still prefer the simpler method of chunking artificials. It basically depends on the skill level and preference of the angler to determine the way they wish to fish. What I enjoy most is putting people on fish with artificials and listening to their disbelief, especially those who have only used live bait when they start bowing up with reds and specks. "I can't believe I'm catching fish on artificials," they say, and I also hear, "This can't be happening, but it is." My favorite is when they say, "There's no dinks, what's up with that?"

The most important factors to fishing success will always include being on fish to start with and a big dose of self-confidence. I've had several young anglers in my boat the past few weeks and they all caught quality fish on artificial lures. The key is putting in the work and being patient, the bite will eventually come like when a strong tide flow sweeps bait along good structure.

This time of year we quite often find the wind laid down with the water greening up everywhere. You can head to the Gulf beaches, make a run to the jetties, drift or anchor over deep and shallow reefs, work the well pads in the open bay you name it. Pretty near every area is holding fish and comes into play when conditions are right. About the only adversity we have to contend with is the heat. I recommend light-colored, loose-fitting clothing made from at least SPF-30 rated fabric and a good wide-brim hat to keep you cool when it counts because some of the best fishing can be found during the heat of the day.

The entire Galveston Bay System is in great shape right now with an abundance of bait like shad, mullet, shrimp and plenty of fishable green water sometimes too clear where you have to look for off-colored water or color streaks to get bit. A wide variety of lures are paying off. Super Spooks and Top Dogs when fish are running bait aggressively and willing to rise and feed on the surface; most any soft plastic in just about any color, your Tidal Surge Split-Tail Mullet, The Thing, MirrOlure Lil John and all the popular shad imitating swimbaits. It's pretty much dealer's choice right now.

Some of the redfish schools we have found recently are just absolutely a bunch of toads with slot-sized fish weighing close to 10 pounds. Trout tend to get skinny in summer but their weights are holding pretty decent with all the forage that's available; 25-26 inchers are pushing the mid-to-upper six-pound range. Some schools of trout have exceptional numbers of 20 to 25-inch fish, probably the best I've seen since the early-80s.

We have seen and heard of some shad die-off around the area. What happens is the water's dissolved oxygen potential diminishes when the temperature rises and with very little wind there is almost zero natural surface aeration taking place so along comes one of those really big schools of shad, and fish in the middle of it become more oxygen-deprived than those on the edges and they suffocate. No need for alarm, that's just part of nature and a normal process this time of year.

We have plenty of fish this summer but you cannot catch them sitting home griping about the heat. Wear good quality summertime fishing clothes, fill an ice chest with lots of water and Gatorade, and lather on the sunscreen. It's on!