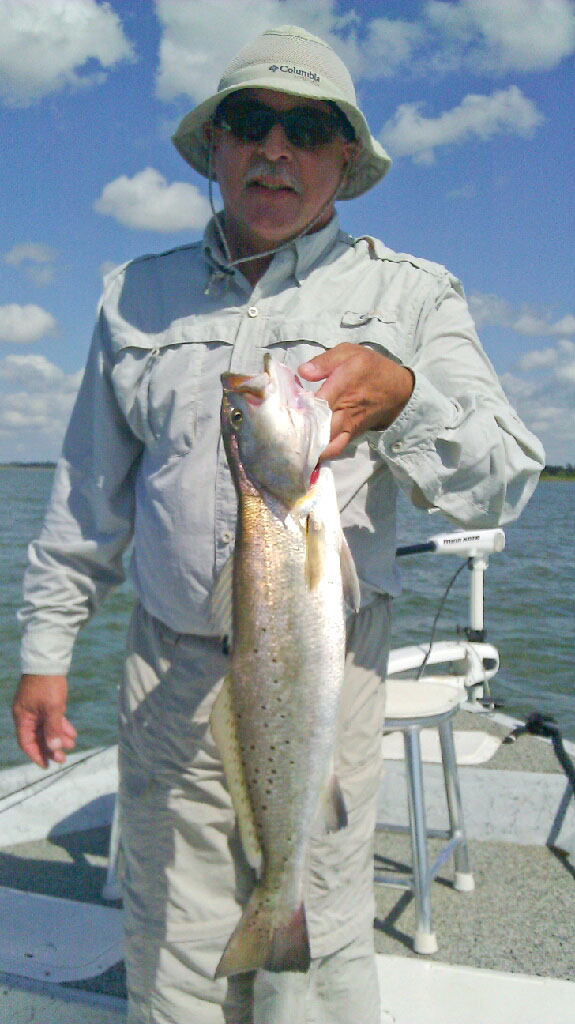 Fall has finally showed up and the shrimp are leaving the marsh. Bird action went wild on Monday the 29th of October throughout the upper reaches of Trinity and East Galveston bays and continues to get better. Most of the shrimp under the diving gulls are small but the fish don't care. Water temps dropped almost 20 on that cold front last weekend, and while this can put the bite in a temporary tailspin, I think it actually might have made it better this time.

Water conditions are good and salty throughout the entire bay system and upstream. There's still a lot of fish up the Trinity and San Jacinto rivers and all the bayous. Look for most of the reefs to start holding good numbers of trout and redfish whenever most of the shrimp leave and the water temperatures remain in the upper 50s and low 60s.

Down in West Bay; look for birds to start working on the lower-end between Sea Isle and San Luis Pass as water temperatures continue to fall. Once the shrimp crop falls from Bastrop and Chocolate Bayous and reaches the bays, fishing will keep improving. On warming trends behind fronts, work the shallow grass flats and potholes along the north shore between Cow Bayou and Greens Cut. Later in December when it becomes colder, drifting all the shell in the upper bay around Confederate Reef, North Deer Island, Meacoms Cut, and along the old Intracoastal will payoff. Concentrate on streaky water when currents are strong during tide changes.

Lower Galveston Bay is providing decent flounder and redfish action reports from Texas City Dike, Pelican Island, Seawolf Park, Bolivar, Galveston Channel, and the jetties have been good when conditions are right. As it gets colder look for deeper areas like Moses Lake and Dickinson Bayou to payoff, especially behind cold northers.

November and December are traditionally months to start throwing a wider variety of lures. I prefer soft plastics like the Tidal Surge Split Tail Mullet and the MirrOlure Lil John. My topwaters this time of year consist of Super Spooks in windy conditions and Spook Jr, Top Dog Jr, and Badonk-A-Donks in calmer conditions. All-around suspending and slow-sinking baits are the Maniac Mullet, Corky Original, and the 51MR MirrOlure. These are what I use day in and day out.

Ahead of frontal systems, in windy conditions, the southern shores of the Galveston complex are prime areas for solid trout where bait is prevalent and water conditions favorable. Decent tidal flow near drains will help, and current along points and towheads will get them feeding. After a frontal passage, deeper patterns for bird action and drifting the reefs are both surefire methods for catching good numbers of fish.

Larger specks will come from shallow areas on north and northeast shorelines as the tides return after northers and the afternoon sun does its magic look for rafts of mullet. Work these areas over thoroughly from shallow to deep with various lures and presentations until you establish a pattern and then stick with it. Once you have an established pattern, you can slow everything down and concentrate on the bigger bite. Remember that timing is everything so be patient; the fish will cooperate sooner or later. Play the winds and the tides that are dealt to you and success will follow.