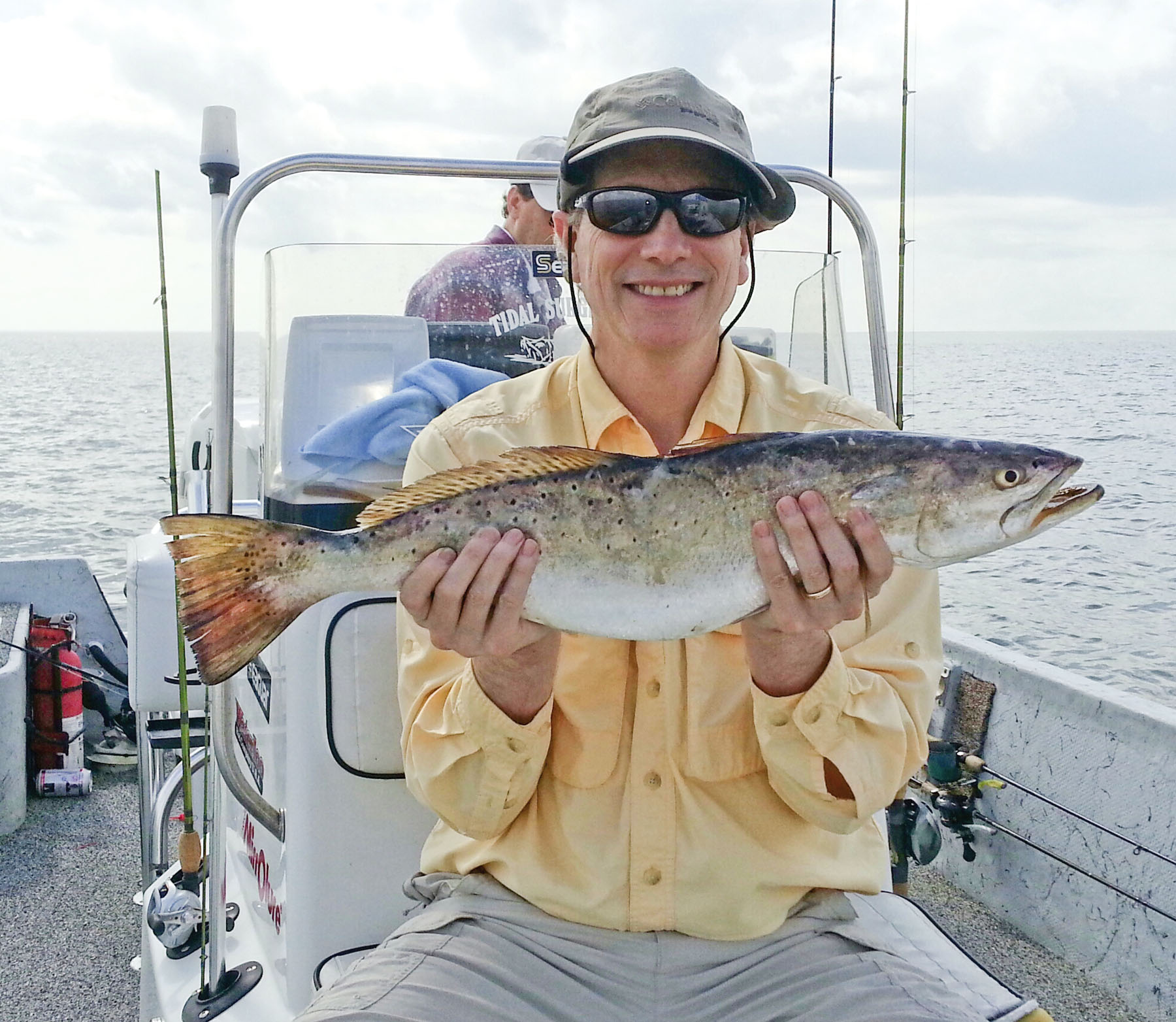 Jim Tyler with a solid Trinity Bay speck. Several per day of this size has been common the past several weeks.
Trout fishing remains very good throughout Trinity and East Galveston Bays with plenty of bird action in five to eight feet of water. Following the last couple of cool snaps the shrimp started dumping out of the marshes and bayous. Bird action started in the northern ends of the bays as always, and will continue to spread steadily southward as they move with the currents toward the Gulf.

Shoreline trout wading action is still rather spotty at best; much cooler air and water temperatures are needed to really kick this off and get the big trout to commit to the flats for the winter run. Wading for redfish has been better than trout—fair to good I’d say, along northern shallow flats near grassbeds and drains. Spoons, soft plastics, and topwaters have been doing the job in about two feet of water or less.

Trout fishing has remained more consistent in deeper water which is somewhat uncharacteristic for this time of year. They have been with the baitfish, which consists mainly of large shad and mid-sized mullet, until just recently when the shrimp began pouring in and they started ganging up on those. It seems the majority of the finfish bait has been staying deep later into the fall season than we normally see, and that scatters the trout.  Slick action has slowed down quite a bit.

Given the pattern we’ve had to work with, I've been concentrating on hard spots and shell, always keying on bait presence to find consistent feeding activity.  Most productive depths have been six to eight feet.  An occasional slick or two is an encouraging sign to make me stick with a pattern and an area until they really light off for a positive bite.

Swimbaits and mullet-style paddletails have been doing the best job to locate the trout, although shrimptails like the Kelley Wigglers in plum and smoke have been pretty good at this too, if you fish them at a slower than normal pace. I've been staying with these swimbaits and paddletails when the fish are suspended at middle depths as moderate speed, steady retrieve is easy for the customers to get the hang of it and keeps the lure in the strike zone.  Once we get them going, we have been switching to your Tidal Surge Split Tail Mullet and similar baits. Quarter ounce heads have been the ticket in the depth of water we've been fishing.

These schools of bigger trout seem lately to have been on an every-other-day type feeding pattern. I'll light them off one day and struggle the next, the third day often puts us right back on them. But that's just big trout fishing and the way it plays out is up to them and not us.

These bigger trout are always hard to figure, some days the bite has been real light, like you feel a little weight on your rod tip, and they're there!

That’s where a really good stick and braided line come into play for me. It's amazing these big trout are taking the bait so light at times but with the right equipment one can make it happen and don't miss nearly as many strikes.

We've been catching and losing quite a few fish in the 25 to 29 inch class and that sure makes the day when a customer can have a shot at a fish like that and end up catching one, or even seeing one get off at the boat. That's what I fish for and it's all good this time of the year, a chance for a big one and decent numbers of solid to big fish sure beats a box of pencil trout in my book any day.

The bays are in great shape and the flounder continue to fall out and head south, life is good in the outdoors right now. Living the dream my friends, I wish everyone a wonderful Holiday Season and good health.  -Capt. Mick