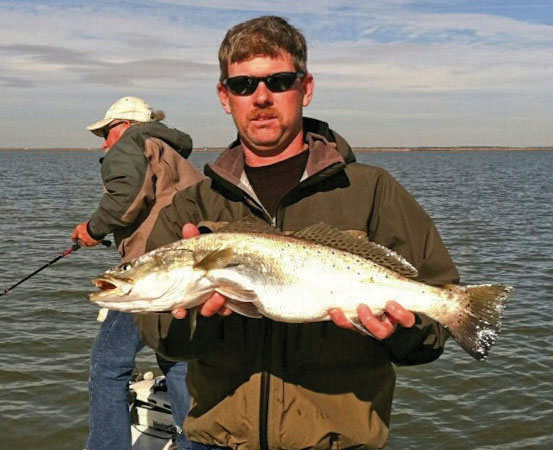 A Trinity Bay toad for David Schaffer, riding the troll motor to stay just off the dropoff over mud-shell.
Well folks, here we are in January and the weather has been abnormally cold, at least by recent winter standards. Water temperatures have been running consistently below 50 for quite a while. Mid-40s range is pretty much the norm recently and with the arctic blast we're supposed to receive early next week it could very well drive it down to the critical range. If you haven't already figured it out, the fishing has been pretty slow.

Looking at the bright side, barring anything freakishly cold coming down, we have lots of fish in the system and it's but a matter of time until we get the warming trend that'll literally start a firestorm of fantastic winter fishing.

There have been some really solid fish caught during warm-ups recently on Tidal Surge Maniac Mullets, Corky Fat Boys, and the good old 52M MirrOlure. Most of these big fish are coming on the deeper edges of the flats on days when the flats water temperatures make it up to the level to trigger a good feed over scattered mud shell mix.

Some heavy trout are also being caught when the tides are very low just behind frontal systems by making long drifts and throwing Maniacs and MirrOlures. The trick to catching these fish is to align your drift parallel and adjacent to the flats in four to five feet of water. The trolling motor is a valuable tool for correcting the drift as the angle of the wind does not often run the same as the dropoff from the flats and the catching zone you need to stay within is narrow.

Water clarity has not been a problem so far this winter; if anything, with only moderate rainfall and the cold water temperatures the water has been almost too clear at times.

This clear water problem, if you want to call it that, is a primary reason that West Galveston Bay drift fisherman have been doing well with soft plastics and 52M MirrOlures drift-fishing streaks on the incoming tide over mid-bay shell. A combination of bait prevalence in the streaky off-colored water and a Gulf-warmed incoming tide is the logical answer why the pattern has worked so well over the years during the winter fishing season.

I have been receiving reports that fishermen down in the TriBay-Chocolate-Christmas region have also been making some solid catches. They say the best conditions have been the combination of warm-ups and higher incoming tides.

Moving to the far north end of the Galveston bay complex, the smaller back bays like Scott, Burnett, San Jacinto, and Tabbs Bay have been fair as well behind northers for drift fisherman making long drifts on streaks and color changes over humps and dropoffs. A few fish have been coming from the deeper bends of the San Jacinto River on jigs and deep-diving crankbaits toward the south end of the river.

Overall, fishing could be better but let's face it, we are having a good old-fashioned winter this year. Water temperatures as low as we've been seeing on average bring a huge impact to the bay fishing scene, and when this happens you can bet it can be tough for the most part. Still though, as they always say, even a slow day on the bay beats the alternative.

Get outdoors as much as you can and be sure to take your family. There's nothing else like it and it's good for you too! -Capt. Mick