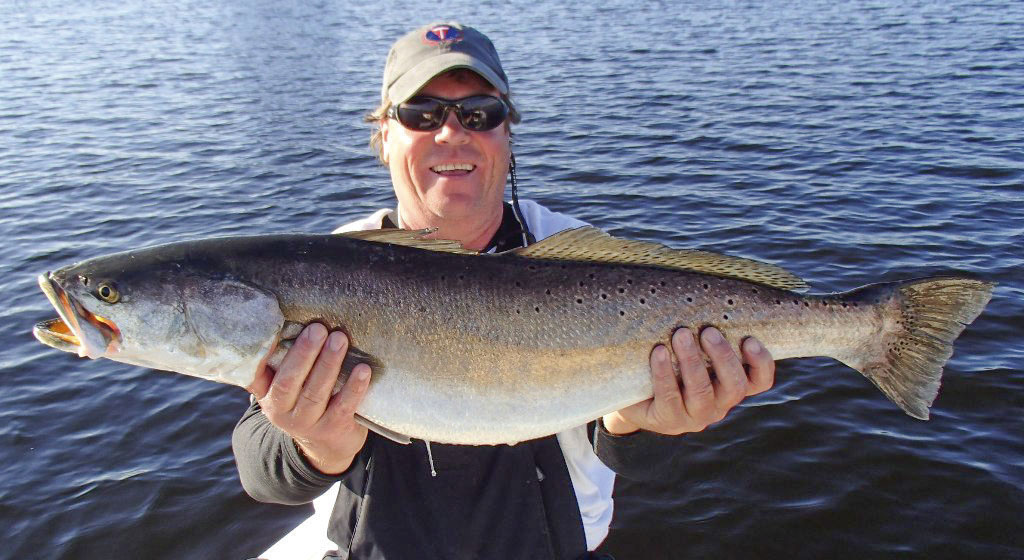 Fishing has been much hotter than the weather lately, other than a few slow days following the front that blew through during the week of Thanksgiving. Water temps plummeted instantly as low as 45 across much of the Galveston Bay System but fishing returned to red hot for speckled trout and redfish as quickly as I can ever recall in the wake of an early-season arctic blast.

Big trout are now shallow for the most part and numbers of fish are staged over deeper shell. The pattern for all Galveston area bays is very similar behind frontal systems. West Bay is usually good right behind a frontal system for a day or two but, East Bay, Trinity Bay, Tabbs Bay, and Burnett Bay are by far producing the best at this time.

Most all the traditional wintertime baits are working for specks and reds; your MirrOlure Series 51 and 52, Corkys, Maniac Mullets, and soft plastics in an array of colors are catching fish.

Water depth, water temperature, presence of baitfish, water clarity, cloud cover, sunshine, moon phase, and tidal flow all come into play this time of year. Keeping a log of as many of these influences as you are able to observe during a day of fishing is one of the cornerstones to identifying staging areas and understanding feeding patterns.

Some freshwater runoff has affected certain areas of Trinity Bay but the fish are established in areas where they'll pretty much spend the winter without much movement unless we receive a major flood event. Chances are wherever you're catching fish right now, this pattern should hold throughout the winter. Fish will just move shallow to deep between frontal systems. The bite might change from time to time on lures, colors, and presentations but the fish will continue to hold tight until the spring run begins.

For a big trout bite, you'll want to go shallow on northern shores after a frontal system passes and when prevailing southerly winds and tides return, concentrate your fishing effort on southern shorelines near drains, towheads, and soft mud bottom. For numbers of fish concentrate on deeper reefs and mud-shell mix bottoms for some consistent drift fishing on calmer days. These patterns have done the trick for me for more than 35 years and I apply them daily to deliver the type of fishing trip my clients indicate their preference to be.

I like sticking with darker colors for all water and light conditions but, when water becomes air-clear I will definitely lean toward more of a natural-toned bait, white, or day-glo colors for overall better results and more positive strikes when they do accept the lure.

Play the weather the best you can but the more time you spend on the water the better success you're going to net. You can't catch them on the dock, just dress appropriately for the weather and the more comfortable you are the better.

I have recently made the acquaintance via email and telephone with some anglers who reside in Virginia; David Moss, Randy Brown and John Brown. They are avid speckled trout fisherman who listen regularly to my outdoors show on Sports Radio 610. David has been sending some awesome photos of big trout they have been catching on the Elizabeth River which is part of the Chesapeake Bay System. It reminds me a lot of some of the areas we catch big trout on the upper Texas coast with the dark tannic water and bottom structure they find and catch big trout in.

Ironically enough they target these big fish in the same manner we do by kayak and wade fishing flats and bars near deepwater guts and dropoffs. They've been listening to the discussions on the show about lures and techniques and I have included two of their photos, caught on Maniac Mullets. One of the fish measured over 30 inches and both are very healthy and winter-fat.

Speckled Trout are amazing fish and are sought by the purists among the plugger fraternity from Texas, along the Gulf Coast, and all the way north to Virginia and Maryland. It just goes to show that speckled trout, no matter where they live, can be taken with the same style of lures and techniques. His description of patterning these fish is nearly identical to some that I describe in this column each month. Small world!