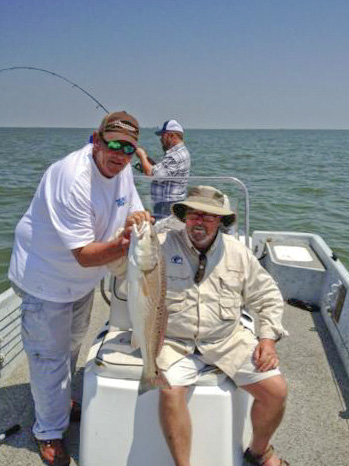 Hello fellow anglers. It's Capt. Mickey here and it's that time of the month again to bring you a recap of what's been happening around the Galveston Bays and take a look at what our fishing prospects might be for July. In a nutshell; fishing has been good when the weather is good. We have lots of fish but we got to have weather to get on them. We have several patterns coming together into what just might make a grand summer fishing season, good enough for the record books!

Trinity Bay is kind of on everybody's back burner at this time. As I have reported earlier, we had a huge flow of freshwater into Trinity that has not mixed just quite right, it will, but it hasn't yet. Our fish just haven't really moved back up in here yet. The river had been down for quite a while but it is taking these fish some time to get back up in here from Galveston Bay proper. East Bay and Lower Galveston Bay seem to be the primary spots to catch fish right now. Lower Galveston Bay, East Bay, Jetties, West Bay, San Luis Pass and the Gulf surf have been offering much better trout action. Redfish too have been spotty but a few schools are starting to show up in Trinity and this encouraging as they are always the first ones to show up ahead of the trout during freshwater recovery.

East Bay has been kind of a no brainer, an absolute ton of trout in East Bay when the weather allows. There has been decent to good action for wade fishermen along the south shoreline. Lately though, we have been pulling too many days of strong due south wind, a dreaded pattern across most of the Galveston Bay system. Forget about fishing the mid-bay reef and bar structures from the boat when it is blowing. To deal with it, you need to get in the water and wade fish and do the best you can along the southern shoreline and other protected areas of East Bay.

The topwater bite been fairly steady for boaters on good wind days and waders in protected areas. As per usual, this an early morning and evening thing with switching over to soft plastics being necessary to stay with the bite when the sun is higher in the sky.

Still talking East Bay here, I would say that the majority of the trout are already established in their summer patterns. We have been working slicks and nervous bait over deep shell in anywhere from 6 to 12 feet of water when we can. The deep shell along the ship channel has been paying off from around Hannah's Reef all the way to the back of the bay. I ride around until I find some slicks and that lets me know there are some fish and we work it over. Timing is real critical right now. When the wind is down and the water turns green it is pretty much a no brainer. Same thing with the surf and the beach front all the way from High Island to San Luis Pass and even as far down as Freeport. When the green water hits the beach and surf lays down, it is a thing of beauty. All the dedicated surf guys have been catching nice speckled trout when it gets right. It can be a sketchy pattern though and it's what we are dealing with right now. The dreaded strong southern winds just kill our fishing. It's not that we cannot catch fish in strong wind - it can be strong out of the southeast or east and fishing can really turn on - but when it's due south, it really puts a damper on things.

I have been seeing a few fish up to seven and even seven and a half pounds. I have not seen anything weighed in yet for STAR on the upper coast but I am sure that will come. Watch what happens as soon as the wind lays; I'm predicting we will see a good number of heavyweights on the scales.

Some of the well pads have a few fish but for the most part you have to be on shell or just off the edge of it. It's good when it's good and it's bad when it's bad. I don't know of any other way to put it. Definitely summer is here, warmer temperatures for this time year. It should just get better and better with calm days and you can target these fish in open water over reefs. There has been a lot of dredging this year and it definitely changes the clarity for lure fisherman. The bait fisherman are doing fairly well but my motto is "Fool 'em not feed 'em." Like it or not, the bait guys are enjoying better fishing than we are at the present time, and that's just the way it is.
That is pretty much where we stand. Deep shell, summer pattern, tide lines, artificial, live bait, slicks, mud boils.

There seems to be an overabundance of ribbon fish in the bay this year. We also have a banner crop of hardheads. We have had several trout with small ribbonfish in their stomachs so that tells you the trout are running them. A lot of times you can be running the bay and you see ribbonfish jumping. Do not pass that up , position your boat and get in there and throw to 'em. You should catch some trout and maybe a few reds.

Hopefully next month we will be talking about how much the wind laid and how incredibly the fishing turned on.