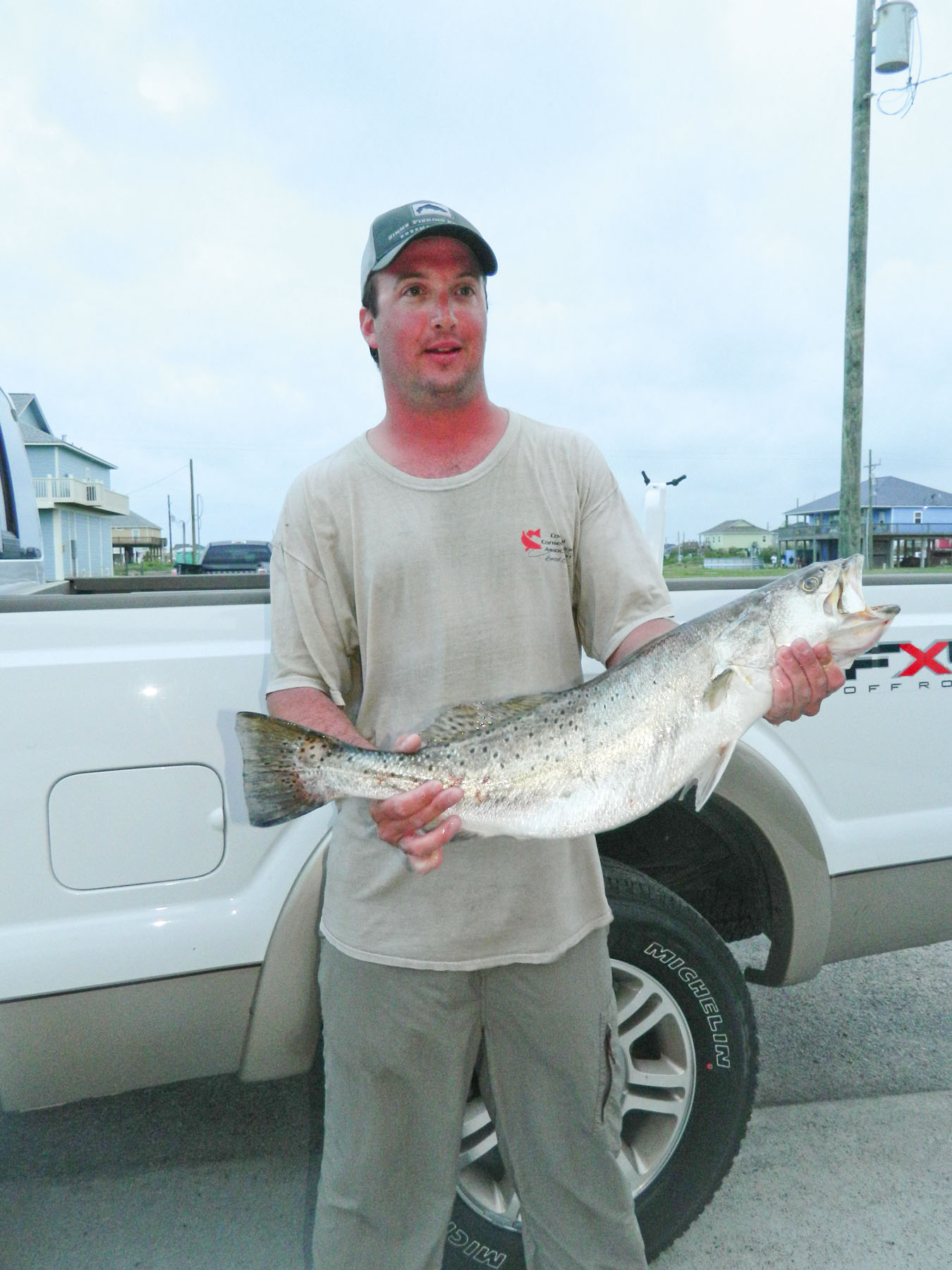 Jeremy Bane jumped atop the CCA STAR Upper Coast Speckled Trout leader board with this exceptional 8lb-13oz specimen – wading East Bay with pink MirrOlure. Congrats Jeremy; I hope it holds up for you!
First week of June and those crazy late-season fronts have finally given way to consistent southerly flows ain't it about time. Up until just a few days ago wade fishing was the norm, given that we had to seek protection from May's near nonstop wind. Shorelines are holding solid trout but are harder to catch than they were a few weeks ago, due mostly to the way they travel during peak spawning periods and also the recent shrimp movements pulling them toward deeper structure. I tell everybody that any angler willing to get wet and grind with a variety of baits Top Dogs, Spooks, Maniac Mullets, Corkys, and a variety of MirrOlures is going to find the bite. You may not find nonstop action every day but the reward is their considerable size. We are still seeing and hearing reports of decent numbers of shoreline trout in the 5-6 pound class with a few pushing up toward 8 pounds.

With the wind down and open bay water clearing, it's pretty much a no-brainer to head for shell reefs and other structure in six to eight feet with soft plastics. In other open bay action, the shad have really begun showing up and are currently spreading all over East and Trinity Bays another no-brainer. Anytime you find shad balls cruising in open water you can bet the trout are going to be close by. Topwaters are the ticket when you see shad becoming really active and that frantic greyhound thing they do is a dead giveaway that trout will take surface baits.

Bird action is beginning to pay off under terns and seagulls when they're over shrimp. The bird bite over shad balls is inconsistent. You can tell when they're over shrimp by the way they swarm tightly together, hovering right at the surface, and doing lots of squawking. When you get close to all this activity you should be able to see shrimp skipping and a blowup here and there; you'll know in a few seconds they're working shrimp.

This time of year with predominantly light SE wind is what we live for on the Galveston Bay Complex. It just opens up all kinds of opportunity for every type of angling from chasing birds, drifting reefs, jetty fishing, fishing dumps and pads along the Ship Channel, wading the surf, and even the pier fishing ratchets up a couple of notches. With water temperatures stable in the high-seventies to lower-eighties, the summer pattern blossoms, and the variety of angling options makes planning a successful trip about as easy as it gets.

Timing can be critical though. Even as good as it can be this time of year they're still not going to just jump in the boat for you at every stop. If you know you're on fish and having a tough time getting them going, be patient and give it some time, they will eventually turn on. Quite often we find that strong bites are tide related and the peak of the feeding activity will be on the tail end of the tidal current whether it's outgoing or incoming.

Four tide days bring generally weaker flows and I have found it best to focus on the lower end of the Complex; East Bay, West Bay, Campbell Bay, near passes, and reefs along the lower Ship Channel, etc. Now on your two tide days I like to fish the upper regions of the complex because the tides flow longer and, given the distance from the passes, it takes a while for their impact to become a factor in the feeding equation. The single outgoing tide is like magic for Trinity and further upstream because the prolonged effect of current drawing water down into the main bay will pull a lot of bait and quite often it brings cooler water to the structure where bait will hold and fish will feed.

So far, with calmer bay waters and green tides, the bite has been good and should continue to improve as the summer pattern develops. Water conditions are good throughout the Galveston Bay System and speckled trout are plentiful. The CCA STAR Tournament is off to a great start and some nice fish have been weighed in. Don't forget to get signed up; your next cast could win you an incredible prize.