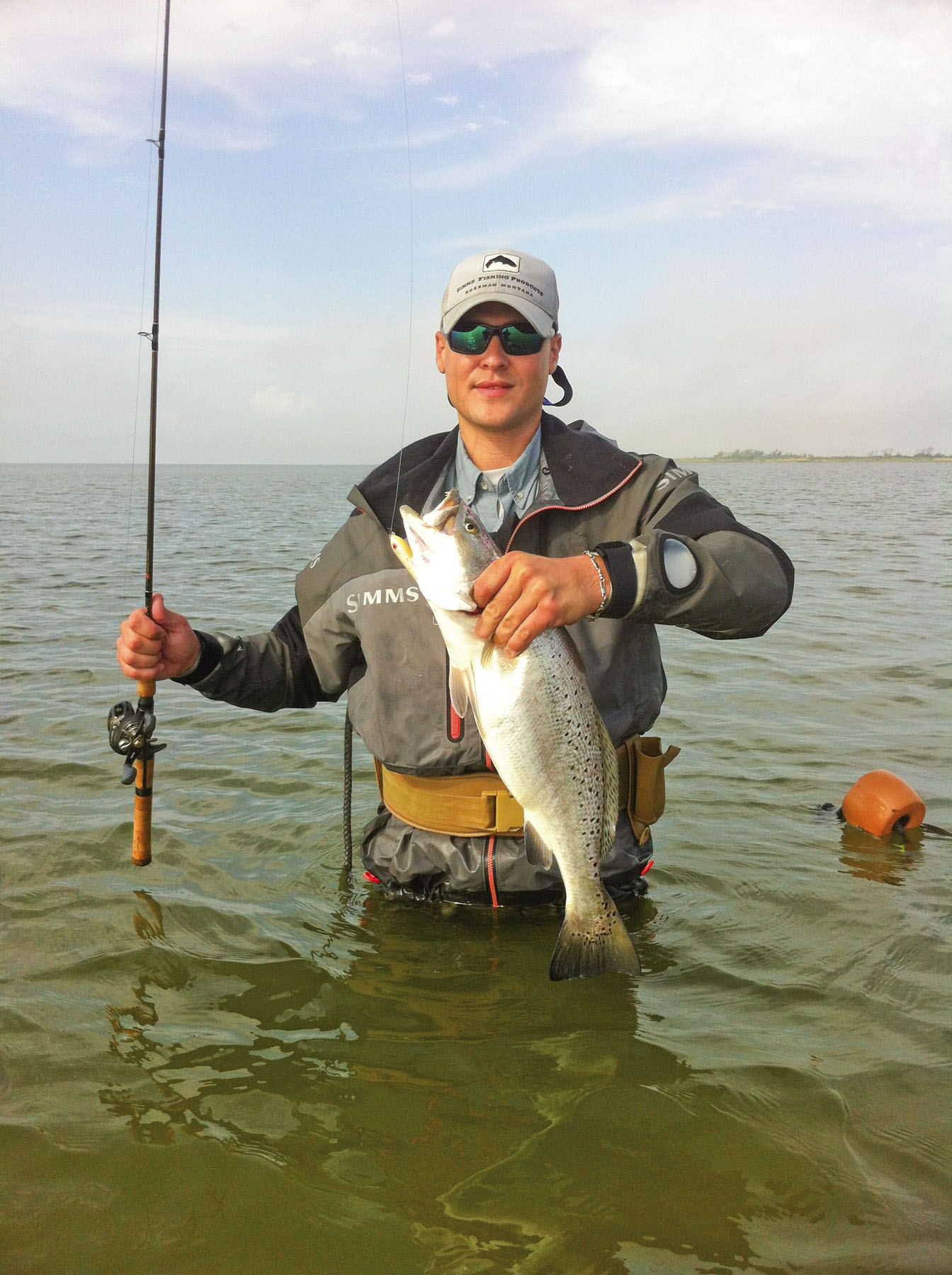 Young Capt. Brian Fikes with a nice speck on a Spook Jr while wading with me the other day. We released several specks in the 25-28 inch class that day in Trinity Bay.
Fishing in the Galveston Bay Complex has been very productive considering the unprecedented string of late-season cold fronts moving through Coastal Texas and the unusually tough weather and water conditions anglers have had to contend with. Traditionally, April is a windy month with changeable weather that most fishermen are content to grind their way through, however come May we really expect to see milder and more stable weather. May 2013 began with another powerful northeroh well.

This year has been exceptional for big trout and also for good numbers that provide easy limits for anglers seeking them. The fish began committing to the shorelines as expected back in late-February, and when the weather settles it's been nonstop through the rest of the spring. I've been amazed at the catches and beautiful stringers I've seen so far in 2013. If this is any indication of what's to come, our summer may be one to remember and the tide-runners haven't even checked in yet.

Right now the specks are heavily concentrated along shorelines and areas with lots of oyster shell. Early morning finds them over shell in 2-3 feet of water and later in the day in 3-5 feet of water over shell and mud mix. We are seeing heavily egg-laden females of all lengths a sure sign of a positive spawn for May and June over our mid-bay reefs throughout the complex. If we can get calm conditions during early summer anglers will reap the rewards of what the old-timers called a "crescent summer". I've been around a long time and I would have to say that so far this spring ranks in the top five of all-time.

West Bay and the Tri-Bay area are already seeing good numbers of trout starting to show up behind San Luis Pass. West Bay should have a great summer as these fish start their movement and spread throughout the bays. Deep shell structure all across that region should provide lots of action in late May and through the month of June.

East Bay is currently producing solid trout over shallow and deep oyster shell. As the summer season gets fully underway popular spots like Hannah Reef, Dollar Reef, Campbell's, Dollar Flats, Pepper Grove Reefs, Elm Grove Reefs, Deep Reef, Middle Reef, Whitehead Reef, Moody's, Windmill, and all the East Bay and middle Ship Channel reefs will all come into play. This will be a blessing for everybody because it will spread out all the anglers and take a lot of the pressure off the shoreline schools that have been very heavily targeted all through the spring months. Once the brown and white shrimp start to move through the main bays bird action will pick up - especially in Campbell Bay, West Bay, East Bay, Ship Channel, and Trinity Bay. The Jetties at Sabine, Galveston, and Freeport are already producing loads of redfish and some very nice trout. Rollover Pass has been producing steady big trout action and this will only get better.

Trinity Bay has been generally slow for redfish but trout action has been excellent, easily taking up any slack. Better redfish action has been found over the past several weeks in East and West Bays and their back lakes. Soft plastics like the Tidal Surge Split Tail Mullet and MirrOlure Lil John in various dark colors along with the old reliable H&H Cocahoe Minnows have been working really well. Topwaters have been a little inconsistent but we do have some decent days.

Stable and calm weather to begin the summer should make for outstanding fishing. There are fish everywhere and the bay system seems healthy and thriving. I wish all the anglers the best of luck throughout the year and please be considerate to other fisherman - and if you don't need fish to cook fresh for a nice meal; please throw them back. Catch and release is really starting to pay off here in Galveston, I can see the difference. -Capt. Mick