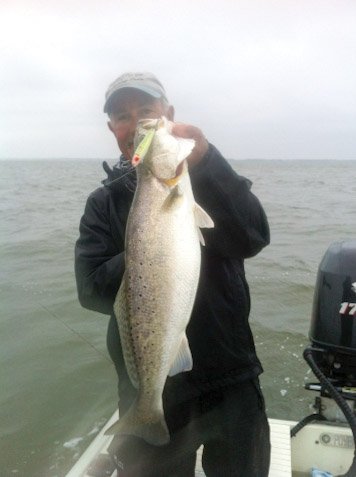 Capt. James Plaag with a nice seven pound speck from Trinity Bay on a tough weather day – “You won’t know if you don’t go!”

After the cold nasty weather in late December and early January, the weather turned in our favor to be one of the best late January fishing stretches I can remember. Most of the fish were right where they were all fall and winter long. The redfish seemed to be a little tighter to the shorelines and the specks were balled up in big schools in four to seven feet of water over oyster shell and clamshell humps.

One thing that helped Trinity Bay; there was a decent flush of freshwater from the Trinity River that purged the marsh similar to the one we had last February. It has already mixed in beautifully setting us up for a good spring if good weather prevails. Water quality and conditions are peak right now and should work in our favor for an excellent big trout bite this spring.

There just seems to be fish all over the entire Galveston Bay complex right now. Trinity Bay has concentrations of fish that are primarily at the top end of the bay from shallow to deep. Look for surrounding flats near drains, channels, and drop-offs to be prime areas on warming trends to spark a shallow water bite for big trout in late February and through March, late afternoon wades should be very productive.

Balls of shad and rafts of mullet are key indicators for gamefish in the area not to mention an occasional slick or two. Traditional go-to baits consist of your favorite topwaters, Maniac Mullets, Corky originals and Fat Boys, and of course the usual assortment of soft plastics or flutter heads. Turning to the rest of the complex most of these bait selections will apply for the hunt of a giant spring speck. Picking an area and formulating a game plan will always include other aspects like tidal movement, wind direction, water temperature, moon phase, cloud cover or clear skies and so on.

We as fisherman tend to make things more complicated than they really are. Hard work and time spent on the water are key elements to success for catching a spring monster especially late in the day or just before dark. Timing is everything this time of year and over the many years I've waded and chased big trout and late day fishing has paid off the best. I think the reason is that most of your bigger trout become more nocturnal in their feeding during late winter and early spring and if you're wading a flat that's loaded with bait near deepwater access your chances of raising a big fish is significant. A good moon phase and tidal flow play a big role in the perfect set up.

Looking at the rest of February and March for East Galveston and West Galveston Bays I like a strong incoming tide and a rising near full or full moon late in the day. When you combine this with clean water and plenty of baitfish the table is set for a most memorable experience and a chance at a double digit trout. This time of year I've seen more ten-plus pound specks come from areas like the coves of West Galveston Bay, the Brian Beach surf at Freeport, the Texas City flats, Seabrook flats, north shore of East Bay, and the west shore of Trinity Bay. It's not like these big fish are cheap by any means but when you do see one or hear about these elusive fish these areas have paid off consistently over the years by a lot of good fisherman.

Another thing that makes these areas consistent year after year is warm water temperatures and baitfish, the key elements to holding good numbers of good fish. Apply these methods day in and day out with your fishing skills and it will make for a more productive spring and hopefully a fish of a lifetime.

Right now play the weather and make your best decision where to fish and you will have success just about anywhere in the Galveston Bay Complex. Our fishery is in real good shape right now and the fish have had a real mild winter and their body weights are up for this time of year. I hope to see everyone at the 38th Annual Houston Fishing Show at the George R. Brown Convention Center March 6th through the 10th. I wish everyone a Big Trout Spring!