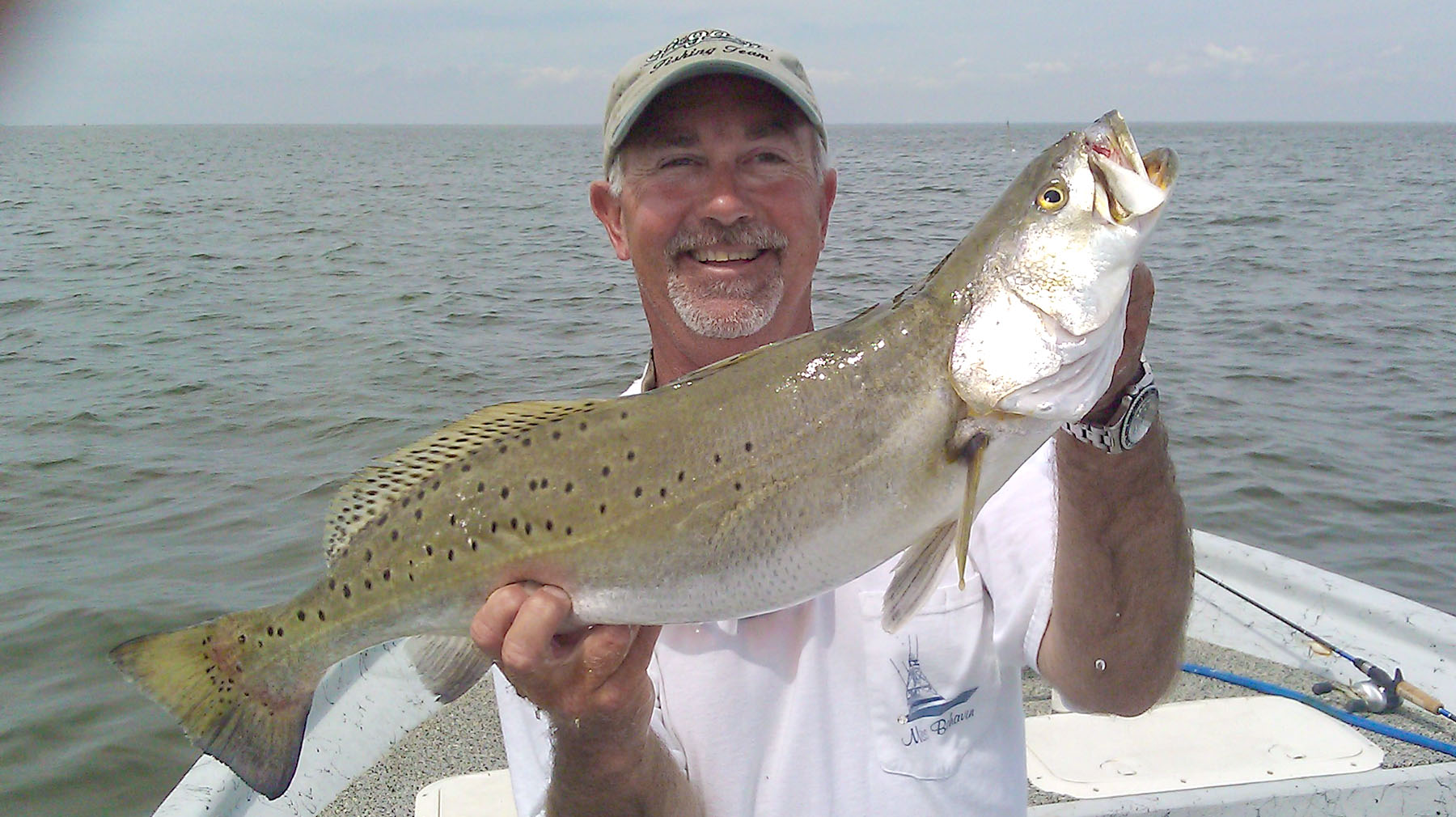 Here’s a good one James Plaag and I found on a scouting mission the other day. The plum colored Lil John from MirrOlure did the trick on both.

Hello Galveston Bay anglers, Capt. Mickey here to bring you a quick recap of area fishing and a look at what May should have in store for us. Before I go any further let me say that with all the changes that occur in April we often find fishing to be tough and I am really looking forward to May.

Since March turned out to be the warmest and calmest I can remember we kind of jumped into the spring transitions and patterns earlier than normal. And it rained! Hallelujah it rained. Right now on Trinity Bay we are doing as much scouting as actual fishing, staying ahead of that push of freshwater. I finally got around to submitting photos with this month\'s article and you will see the results of a little scouting effort that James Plaag and I ran several days ago. Those trout were in freshwater but it was clean, not the nasty looking stuff we see coming out of the San Jacinto, Trinity and local creeks and bayous. I think in two major rain events we had almost ten inches locally and that is a lot of water, not counting what is coming down the rivers. This is something we have not had to deal with in a couple of years so people may be unfamiliar with how we fished back when we used to get lots of rain on a regular basis.

Initially, large amounts of water coming into the bay causes fish to move and confuses the fisherman. Once things begin to stabilize, even though the salinity might be low or completely fresh at the surface, the fish will find a place they like and this is when the big stack-ups occur, right now though there are definitely no stack-ups that I know of. Like I said earlier April has so much going on that the bite can be tough to track and we don\'t have a real consistent bite on trout or redfish at this time. You will have a great day and then you will struggle for three or four, that\'s just the way it is this time of year. To catch those fish we moved away from the shorelines to the six foot depth on average. Retreating to saltier depths is part of the fish\'s reaction to the freshwater layering in on top of the saltier water already in the bay.

Most of the bottoms that we have been catching these fish on have been generally hard. We have been seeing a sporadic topwater bite. Most consistent bite has been on soft plastic and for several months my best producer is that Lil John from MirrOlure, believe it or not. There is nothing in the water that looks like that bait so I don\'t know what it is about it. It is slightly scented which might explain why the fish will come back on it if you miss them. I prefer the 1/16 ounce jighead for this lure to give it a slow, darting fall.

Right now the northern half of Trinity is pretty trashed. There are some fish in the fairly good water down the east side but they are very fickle right now with no set pattern I can detect. Like I said earlier they\'re in there, we go back and find them over and over, but we just cannot get them to stay lit up. On calm days the Ship Channel can be your best bet as the incoming tide seems to overpower the fresh inflow and the area remains fairly salty.

The north shore of East Bay back toward the Refuge and Oyster Bayou is holding some real fish for now, so long as the freshwater inflow back there doesn\'t run them off. Water quality along East Bay\'s south shore is pretty good and I expect a good trout run to kick off any time in that area.

Dickinson Bay, Dollar Bay and the Texas City area has been holding some pretty good trout. Not a lot of big numbers but that is just this time of year. Solid trout are being caught by wade fisherman around Mosquito Island and in Campbell Bay.

We are kind of turned upside-down right now but it will get better. It is a good time to catch a big fish if you are willing to put in the time and stick with an area. If you know the fish are there you have got to stick with them. Use ALL your fishing skills and keep your eyes open.