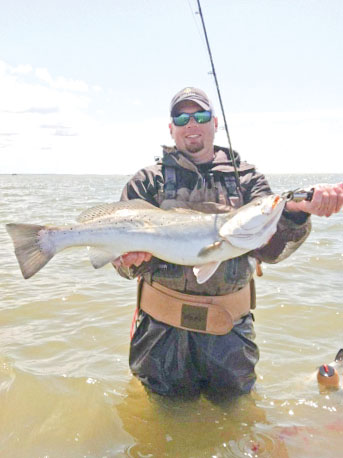 Derek Ryza – 9.1 lbs!
The Galveston Bay Complex has been as good as you could ask for so far this spring, especially considering the adverse weather anglers have had to contend with. Even with strong winds from north and south every couple of days fishing has been better than expected.

Up here on Trinity Bay, on days behind strong north winds and low tides, drifting the open water clamshell dumps has been productive for nice trout from three to eight pounds on various soft plastics rigged on 1/4 ounce jigheads. Baits that have been working for me include Tidal Surge Split-tail Mullet, MirrOlure Lil Johns, and H&H Cocahoe Minnows in the 3-inch size. Depending on the water conditions we have been throwing plum, Chicken on a Chain, East Beast, Morning Glory, jalapeo, and rootbeer.

Where glass minnows are prevalent the smaller baits are working best with a straight and fast retrieve, especially the swimbait style, whether wading or drifting. When concentrations of larger baitfish like mullet are prevalent, MirrOlure Top Dog Jr, Super Spook Jr, and the 7M MirrOlure surface plugs are working well for wade fishermen.

During slower periods when nothing is happening on the surface and soft plastics are ignored, suspending soft baits such as the Maniac Mullet and MirrOlure Corky will continue to produce some strikes. Anything in the white-pearl-glow family with chartreuse tails or backs, and also the clear-bodied patterns with lots of glitter are all good ones to try. The time-tested black-orange-gold is another.

Good tidal flow and hard bottom is producing good numbers of trout and reds in Trinity Bay when water clarities are good. Usually after a front stabilizes and the first day of an easterly or southerly flow, early morning shallow water fish are lighting off consistently for about two hours. If the water is too clear it only lasts until the sun breaks the horizon. Traditionally the glass minnow pattern makes the bite exceptional early and late.

Working that glass minnow pattern I have been wading early and late if tides are right and then drift fishing deeper water during the middle of the day if the sun is bright. On cloudy days the fish seem to bite a little better in the shallows for most of the day, this sure helps when you want to keep plugging for that big bite. All of our upstream small bays are still yielding good catches for drift-fishermen in 3-6 feet of water on various plastics and live shrimp and popping corks. Bayous and rivers are still holding fair numbers of trout and good numbers of redfish.

Moving over to the East Bay system, fishing has been generally good here as well, wind and weather permitting. Protected shorelines near drains and towheads along the south shoreline have been giving up good numbers of solid trout on topwaters and soft plastics early and late.

Before too long the shallow hard-sand flats will start to pay off when mullet start to raft up. Tide-running trout from the jetties and the Galveston Channel will soon begin to migrate eastward along the south shoreline and areas adjacent to the Intracoastal Waterway, following the hoards of baitfish. On calmer days the deeper shell bottoms off adjacent flats will start to produce from Siever's Cut to Marsh Point. Anglers targeting trout should focus on green water, wind-created color streaks, slicks, and rafts of mullet for better success and quality fish.

The west shorelines of Lower Galveston and Campbell Bays are starting to heat up as well for wade fisherman when the wind cooperates. The Galveston Jetties and lower portions of the channel are hot right now for redfish and black drum - the drum run is still on!

Trout action in West Bay over near San Luis Pass traditionally becomes very good during the month of May as tides strengthen and water temperature continues to rise.

We always look forward to the flounder making their way back into the bays following their offshore spawning run but so far the action has been spotty. Most of the flatfish have been coming from backwater coves, marsh sloughs, and adjacent flats. Your smaller soft plastics slow-rolled on bottom with the current are usually the best ticket.

So there you have it folks; fishing's been good when we're not blown off the water. I expect excellent catches during May from all across the Galveston Bays Complex. Be safe and courteous on the water. Stay on 'em my friends.