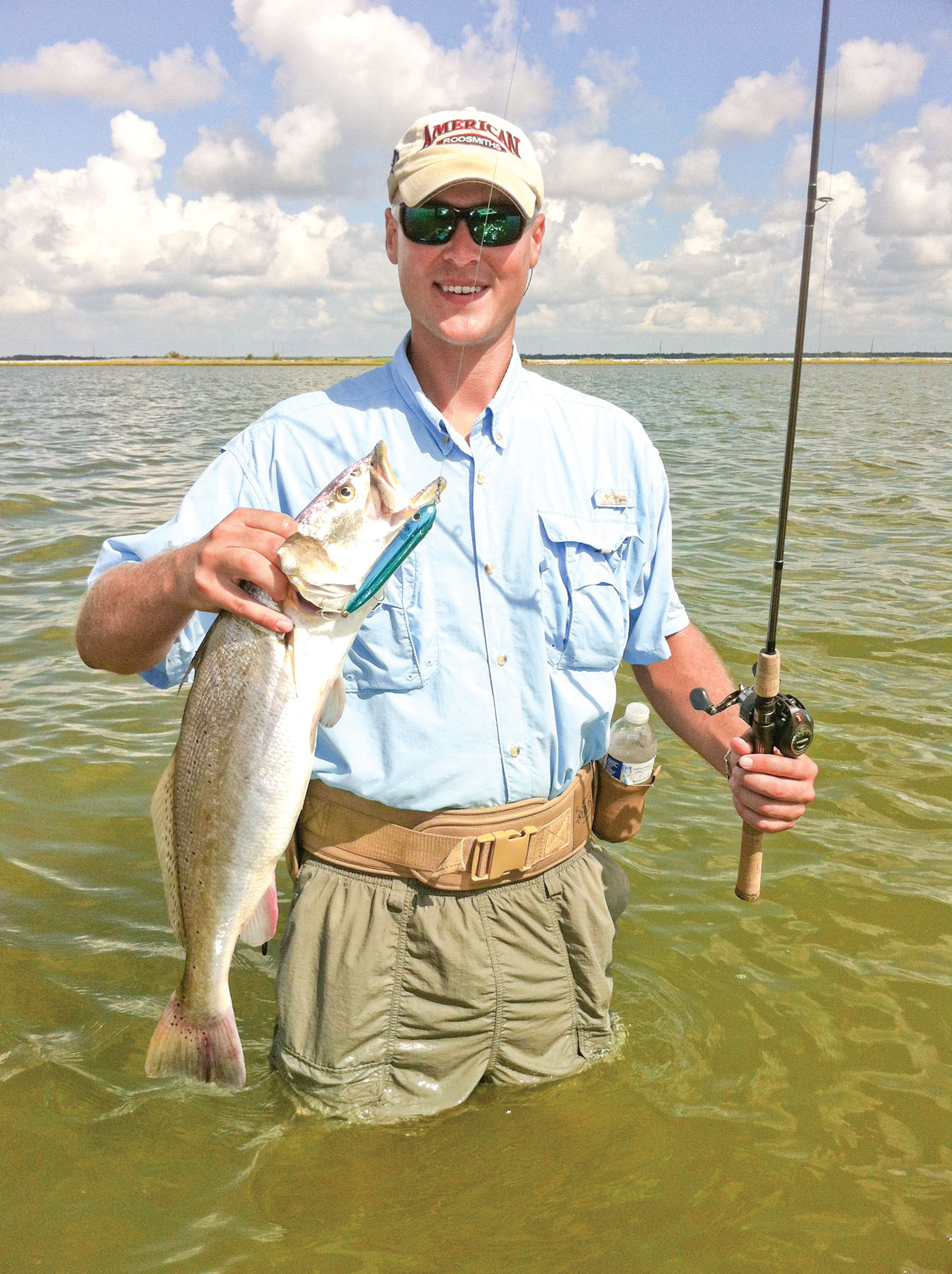 Summer is finally winding down and things have slowed a bit here on the Galveston Bays; but when you measure everything as a whole, weve had a really good run of fishing these past four months. Live bait has been king here the last two or three weeks, always is this time of year. But its not slowing me down, were still catching some fish on lures, soft plastics mostly, Tidal Surge Split Tail Mullet and MirrOlure Lil John. Those baits have been consistent all summer over well pads, deep shell, slicks, mud boils, all that open-water stuff - even along shore lines. So, were still doing well enough.

Talking trout, September has potential to be kind of a transition month and depending on the fish, some years youll have two or three weeks of real slow bite and the live baiters with shrimp and croakers are doing better, but I dont think its going to be that way this year. I think we are going to be heading right on into the fall run without any dead periods. I say this because we have so many fish. I really dont think it will be a prolonged transition at all; the bite may get spotty for a few days but theyre going to be biting somewhere, you just have to find them.

Your redfish are a different animal altogether and right now they are definitely spotty. A lot more happens to your redfish with movement out of the marsh, spawning migrations, and all that. Id say they are going through their transition right now. The other day I was on an open-water school of reds. There had to be 200 fish in that school just swimming on top like goldfish. We tried and tried and caught one fish out of them. I played with that school for about two hours, following with a trolling motor. It was real cool my customers enjoyed watching that they thought it was pretty neat seeing big fish like that swimming all over the top, but they just wouldnt bite. We tried spinner baits, topwaters, soft plastic, a little bit of everything. I think we ended up catching that one fish on a Maniac Mullet, just kind of dousing it in front of him. Lots of times when you can see them like that you cant catch them.

Trout fishing has been fairly steady. We havent caught our limits every day, but enough to make it fun. Like this past Monday, it started out being really slow and I thought, Man, its going to be one of those days. And finally it hit me, Oh this is tide related. Turned out, it had a lot to do with the tide.

We have days with little current and were struggling. Then a few hours later that tide gets rolling pretty good and its like somebody threw a switch. Maybe youve noticed some days you can pull up to a well pad with a bunch of slicks coming off it and its just like working birds. You catch tons of fish. Current goes slack and you cant buy a bite.

Speaking of birds, right now we have a lot of birds working but theyre on a lot of small stuff; nothing solid - baby specks, sandies, gafftop, that kind of stuff. You can weed through them and maybe find a few just-keeper trout so I just steer clear of it; not worth the effort. These folks that are doing it need to mash their hook barbs down because theyre going to mess up a bunch of baby trout. Once the marsh dumps on a good norther and the really big shrimp start moving, the fish will get bigger under those birds, and thats when it is fun.

Once the fall season gets truly underway, we are going to have a whole lot going on fishing-wise. I already mentioned the bird thing and lots of folks want to know when to expect it. The fact of the matter is that the shrimp migration pretty much controls it. If the migration is drawn out, the bird season if you will, can last way into November. And Ive seen it where we had a couple hard, early northers real close together and it was barely two weeks long.

As the water cools we will see a lot of the better trout moving up to the shorelines this makes for some of the best wade fishing of the year.

The bull red run will be going on and it gets folks stirred up the same as bird-fishing. It is a once a year deal and can be a whole lot of fun in the passes and along the beach.

Then theres flounder. My goodness! You talk about getting people stirred up - let me tell you, flounder can get them stirred up. If the number of flounder we have caught totally by accident this year might be an indicator; Id say we are in for a heck of flounder run.

So there you have it. Weve had as good a summer as many have ever seen and if everything holds together - no hurricanes, no major flooding down the rivers, no red tide, none of that bad stuff - I cant help but think we are in for an awesome month of fishing in October.

Go have fun and be safe on the water. Capt. Mickey