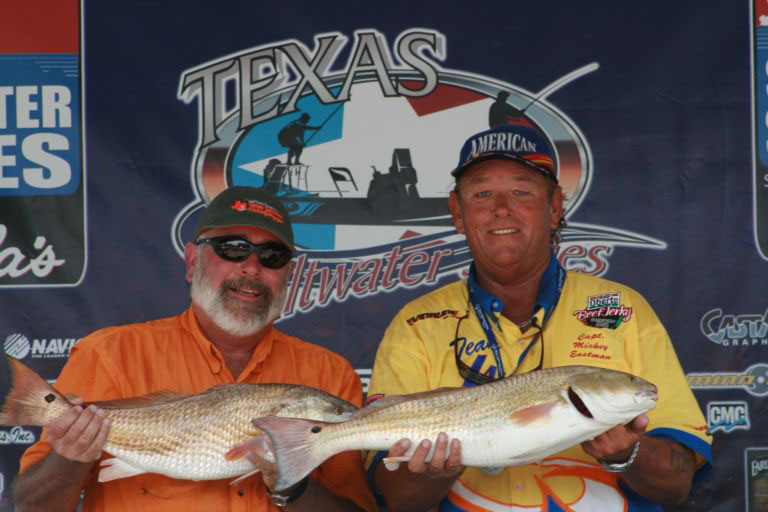 I teamed with our editor, Everett Johnson, to fish the Kemah leg of the Texas Redfish Series. It was tough day but we hung on and felt very lucky to find two fish that weighed 16.9 pounds, enough to win! Photo courtesy of Texas Redfish Series.
Here we are in August and I wish it was fall already. What a summer, I am ready for it to go away as it has been a tough one for me. I would like to be able to say a lot of good things about fishing right now but I do not use croaker and I am not catching a lot of fish like those who do. Right now fishing is pretty slow, we are catching some fish, but we're working hard for them most days. I have to place most of the blame on the freshwater situation because we have lots of fish in our area bays. It is mostly a problem of finding salty pockets and working them like you're digging diamonds; the past couple of summer seasons spoiled us.

Every river that feeds our Galveston system is running at or near flood stage and many of our marsh drains are running fresh as well. Right now the hot spots are the ship channel, the ship channel, and the ship channel. This seems to be about the only area producing consistently and it's not hard to figure why. The tides that flow through the jetties deliver good gulf water to the channel, so naturally it remains salty when other areas turn completely fresh. We do have some good water layered underneath the fresh in East Bay and places like that, but the fish have been real finicky. They seem to be going through a shock period because all this freshwater has changed all of their habits up. We as lure fishermen do not yet understand how to catch them consistently.

Trinity Bay
For the purpose of this report we can go ahead and say Trinity Bay is toast. There are still some fish around here. For example; Everett and I caught our winning fish for the Texas Redfish Series here, but we got lucky. I knew they were there and we kept messing with them and finally late in the day we came up with two heavy reds. I guess you could say persistence paid off. If we can get a good incoming tide, the areas around Trinity Bay Marker 70 and 72 should become a hot spot for trout. The water turns over quickly with strong incoming flows and fishing gets pretty good there at times.

East Bay
I ran all of East Bay today and water clarity in general is poor. The notable exceptions are isolated spots along the south shoreline. There are some fingers of good water over there around Fat Rat, Elm Grove Point and the Hog Pens. The wade fishermen are still catching some nice fish over there with topwaters and of course soft plastics and live bait. The Channel is holding good water all the way up to Marker 68.

Galveston Bay
Upper and Lower Galveston Bay the water has been good. There has been a lot of bait but the fish have been real scattered. There is no schooling action where we can just nail down a school of fish and stay on them. You really have to work hard, pecking and scratching.

Galveston Jetties
Even the jetties have been slow; you would think that they would be stacked. I did not catch these fish, however some kids I know who fish the beachfront said they were catching one hundred trout a day on topwater. They were not even getting their feet wet, just standing on the sand and casting out past the sand bar, catching a lot of nice trout.

Better days are ahead and I cannot imagine it could get any worse. We are just paying our dues, having to work hard to catch our fish right now. If you are not in the mood to really work hard and give it all you got then you might to play a round of golf just stay home and catch up your honey-do list. Some days are better than others with conditions depending on the tide and the moon. When we hit it right it is fair to good, but hardly consistent. To offer an overall rating I would say that fishing is just fair right now, that is the best I can give it. Live baiters, especially your croaker fishermen, are making some pretty good catches along the channel, but that's not my game. We will just have to weather it out and hopefully next month we will have a better report to give you.