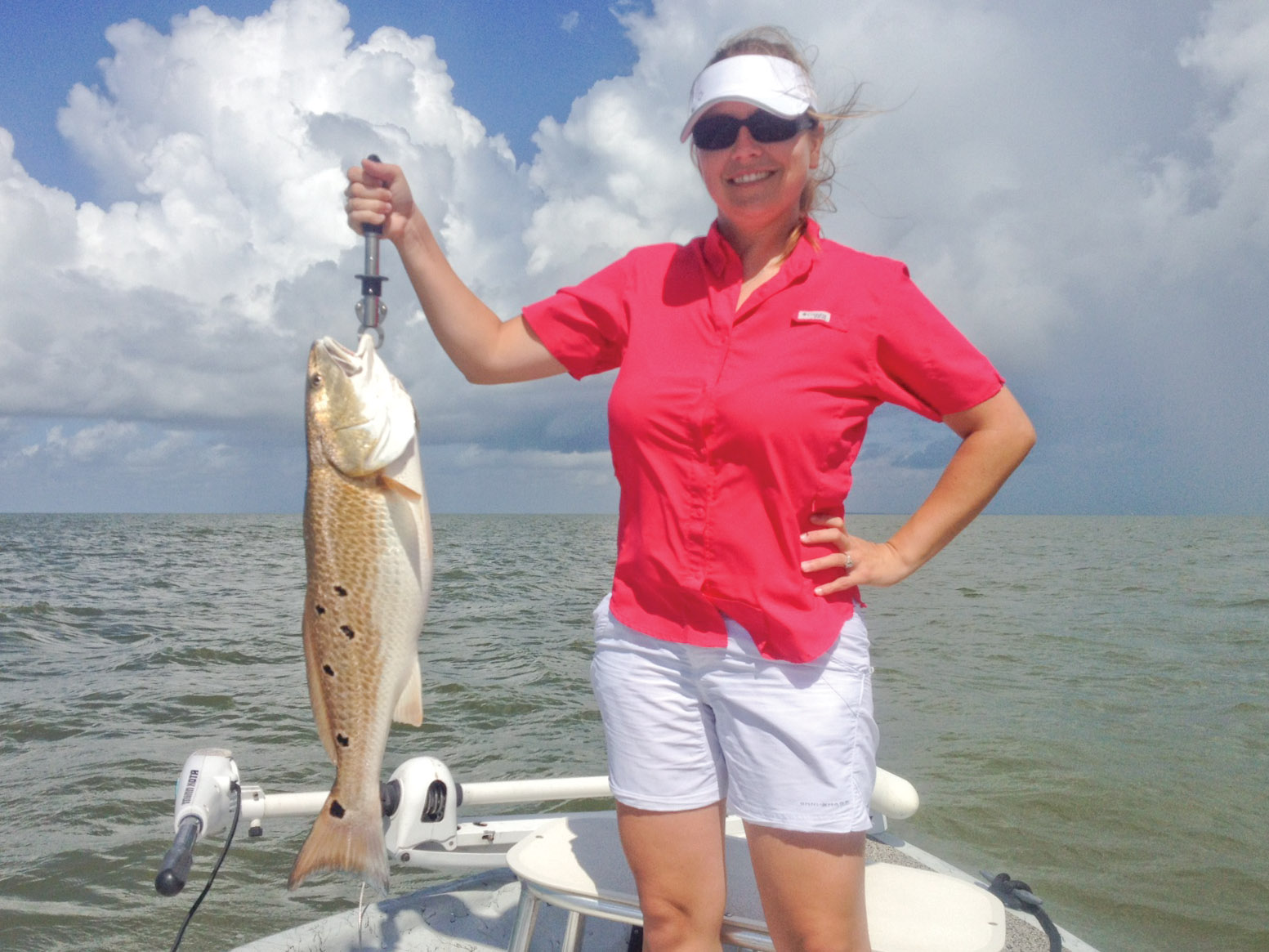 Well the summer doldrums are kind of setting in around here. We've had a good summer so far but now the last week or so we have been getting a lot of southwest and west wind and it sure has put a damper on the artificial bite. If you are planning to target trout on lures you really need to go early in the morning or hit it late afternoon; the midday hours are generally slow except maybe on your best tide days. If this southwest lies down we'll get a better shot. Live baiters are still doing well and they're hitting them pretty hard and heavy, all those big trout every day. Best lure bite in deeper water has been on soft swimbaits like the larger Cocahoe Minnows, Tidal Surge, and sometimes the MirrOlure Lil John will get them. Good colors have been root beer and watermelon with red flakes.

My game plan has been an early start, focusing on trout until the sun gets high. When I have wade fisherman we are working shallow for the first hour or two and the topwater bite has been fair to decent in two to three feet of water. We have had a few that pushed to six pounds. I heard of a seven the other day but most are 3-4 pounds. Surprising we have picked up some males that went three pounds. The topwater action depends a lot on wind direction. When it's over we head to mud-shell mix in about six to ten feet and switch to plastic. The Trinity Bay gas wells were producing lots of trout but that has slowed to only a few good ones. The better trout have either moved shallower to spawn or traffic pushed them away. There is still a ton of smaller trout out there though.

It seems the concentration of slot redfish that were out on the channel between Marker 52 and 56 have moved up into Trinity Bay. There are still decent numbers of oversize fish hanging there and they are fun to catch and release. Those bruisers can save your bacon in west wind as clarity holds fairly good and you will see current even on weak tide days on the channel.

East Bay is still holding some good trout over the major reefs. Soft plastics are working and of course the live bait guys are really getting them. Schools of reds are in the mud but they are not what we call tournament-class, skinnier than what we are seeing in Trinity.

Looking into September, everybody is praying we can dodge the hurricanes. I know some areas still need rain but I don't think we need it that bad. Along the beach front, I hope we get some calm days as those poor guys are due a break. On the few laid down days we have had lately they have been getting really nice trout action and good numbers of reds. It will not be long and the surf will be full of bull reds.

There are a few tarpon being caught off Galveston, not really what you would call hot and heavy yet but the best of that action always comes into its own later in August and throughout the month of September.

Being a hardcore lure man I can hardly wait for September. Some anglers will complain that September is a transition month but the promise of cooler days and maybe a few mild northers followed by light southeast breezes usually paints a brighter fishing picture. With the quality of trout fishing we enjoyed earlier this summer I cannot help but think early fall weather will have it busting wide open again.

Look for the bigger trout to pull into wading depths. There should be a lot of shrimp moving from the marshes toward the Gulf and that always means lots of good bird action for the anglers that prefer to stay in the boat. The shrimp migration can also bring a lot of trout and reds to the edges of the well pads where the shrimp like to bury up in that soft bottom.

If the dog days have had you down there is a change right around the corner. Make sure you have your trolling motor and batteries in shape if you plan to work the birds and wells. If you are wader, get your Corkys and MirrOlures cleaned and replace the split rings and hooks. September promises to be a great month on the Galveston Bays.