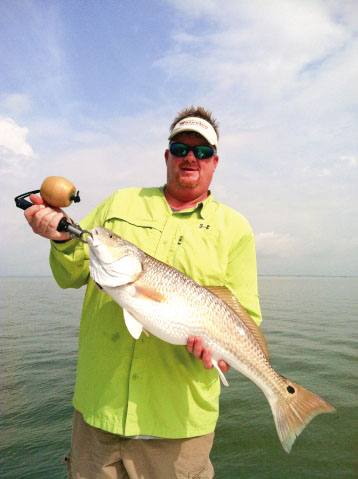 Sam Henicke – Trinity Bay toad redfish.
The best thing for me right now is that July and early August are in the rearview and I'm hoping and praying the persistent south and southwest wind leaves too. We may still be suffering through the latter dog days of summer but somehow I get the notion the trout and redfish around the Galveston Bay System must have missed the memo. Considering conditions, fishing has been good for the angler's that have found a way to adapt to prevailing southwest winds. Another thing that occurs to me is that we have an awful lot of fish relatively untouched due to recent wind and water conditions, and this can definitely be the right stuff for creating incredible September patterns.

Huge schools of trout have been roaming all across the Lower Galveston System. Hotspots have been the numerous Houston Ship Channel reefs, the Exxon A-Lease gas wells, Dollar Reef, and the flats that stretch from Texas City to Seabrook. These areas continue to hold green water and cooler temperatures even on weaker tidal exchanges.

Schools of bull redfish are forming and have been generally roaming in these same areas as well. Live bait slingers have been doing well in pretty near all conditions but when the water is right and conditions are right, lure chunkers have also been having a field day with quick limits of trout and redfish. There have been days when occasional tarpon have been sighted rolling in the lower channel area.

Upper East Bay and upper Trinity Bay have been generally very slow due to ill southwest winds but on days when you get lucky and catch it calm the water greens right up and the fishing can be incredible. Deeper shell and well pads are loaded with trout in the eight to ten foot depths, when we can work them. Soft plastics worked deep on 1/4 ounce jigs have been the ticket.

The summer dog day pattern can actually be just what the doctor ordered when conditions glass off during the heat of the day. The presence of bait schools and sometimes gamefish feeding higher in the water column become very easy to spot and target. When the wind lays suddenly, as it has done a few times recently, the surface waters are still oxygenated, so bait rises and the fish we're after follow them.

This opportunity enables a guide to teach his more novice clients how to read feeding activity, something the untrained eye will almost certainly miss when wading or drifting in windier conditions with steady surface chop. Riding the trolling motor and fishing out of the boat makes it that much easier given that you're higher above the water. It amazes me how many times a slick, mud boil, noticeable wake, or other surface feeding activity goes unnoticed. Nothing can be more exciting than schools of trout or redfish swimming around the boat where everyone can see the fish and throw to them.

My go-to soft plastic baits this time of year are primarily the Tidal Surge Split Tail Mullets and MirrOlure Lil Johns. I have also been doing well with 3-1/2 inch Yum Money Minnows and the Yum Lil Suzees. Color preference is mainly dictated by water clarity and light conditions ranging from pearl, chartreuse, plum, red, rootbeer, and black. In general, darker water calls for darker lures. To me though, soft plastic lure color isn't nearly as important as confidence, and pretty much the same goes with topwaters. If you have positive signs that fish are in the area, and confidence that can catch them, you might refine your color selection as you go but it takes confidence and technique to confirm the fact they were there in the first place.

The Galveston Bay System is alive and well, and the fishing is good. The weather is hot but the fish don't seem to care. Wear quality SPF-30 or better clothing, stay hydrated, wear a good hat and plenty sun block. If the wind has your favorite area churned up and unfishable, take your pick of some of the areas I mentioned that have producing right through the worst of it. Be safe on the water! -Capt. Mickey