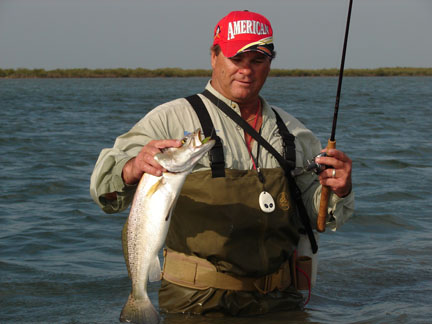 The winter of 2008-2009 brought some of the hottest action this guide has ever seen. As a result of the drought our salinities remained well above average and many anglers enjoyed widespread success in upper San Antonio Bay and the Guadalupe Delta. For months the boat ramp in downtown Seadrift, usually empty during the heart of winter, was packed with trucks and trailers. Tackle shops were abuzz with tales of easy limits and many exercised this option. I on the other hand went the other direction to escape the traffic and chase my favorite quarry.

This past winter brought many notable catches and our best speckled beast came during January. She measured 29.5-inches and weighed right at 9.0-pounds, a true trophy for these waters. The same angler caught and released a seven pounder that taped 27. These fish were caught within a 20 minute span and within the same 20 square-yard area. The water temperature was 46 degrees and the air temperature was 44, the morning weather was rather inclement by civilized standards yet perfect for us; misting rain, strong wind and heavily overcast sky. The angler that caught these trophies was ready and willing to pay the price of winter trophy trout success; braving cold weather and howling wind, to be in the right place at the right time, to get his hands on the fish he had dreamed of for many years.

In February, in a secluded San Antonio Bay cove, another angler found a trophy when the weather kept most others indoors. "I finally did it," he yelled as he held up a beauty that easily exceeded the 28-inch mark and could possibly be a lifetime trout for him. He too released his trophy so it could grow and fight another day.

To date, the lure that has been proving itself most worthy is the MirrOdine XL, slightly larger version of the original MirrOdine made by MirrOlure. This is a suspending twitch bait made in the shape of a sardine. I have been using the #26 (red back and white belly) and the CFPR (chartreuse back and pearl belly) almost exclusively. Shellie and I and our clients have been using this lure in many situations. It has consistently produced trout, redfish and flounder in depths ranging as shallow as 8-inches and as deep as 6-feet.

Effective presentations are very easy to learn which makes the MirrOdine XL a great choice for both novice and seasoned anglers. If you want the lure to run shallow, give it a moderate to fast retrieve speed and apply frequent twitches with your rod tip, much like you would with a soft plastic on a light jighead. Slowing the retrieve will naturally allow it to run deeper. If you want it to run even deeper, stop the retrieve and let the lure fall for several seconds, then apply light pops with the rod tip and reel it slowly. When working over clean bottom with no shell or grass present, we have taught clients to let it settle all the way to the bottom and then begin the retrieve from there. Given its versatility and range of applications the MirrOdine XL is an excellent addition to the every angler's tackle box.

Other lures that have been producing excellent catches of late include the She Dog in CRBK (black back with chrome belly) and the CHPR (chartreuse back and belly with pearl sides). On the softer side of things, our best producing plastic has been the Texas Assassin pumpkinseed/chartreuse rigged on 1/16 oz. Assassin jigheads.

April brings higher tides and steadily rising water temperatures. Trout will begin moving away from the muddy bottoms of winter and toward sand-grass shorelines. The reefs in San Antonio Bay will offer excellent wade and drift fishing potential. The best signs to seek include working gulls and pelicans, slicks and glass minnows. Drifting the back lakes of Matagorda Island should be a good way to pick up a nice mix of trout and redfish. April holds a lot of promise for POC-Seadrift anglers.