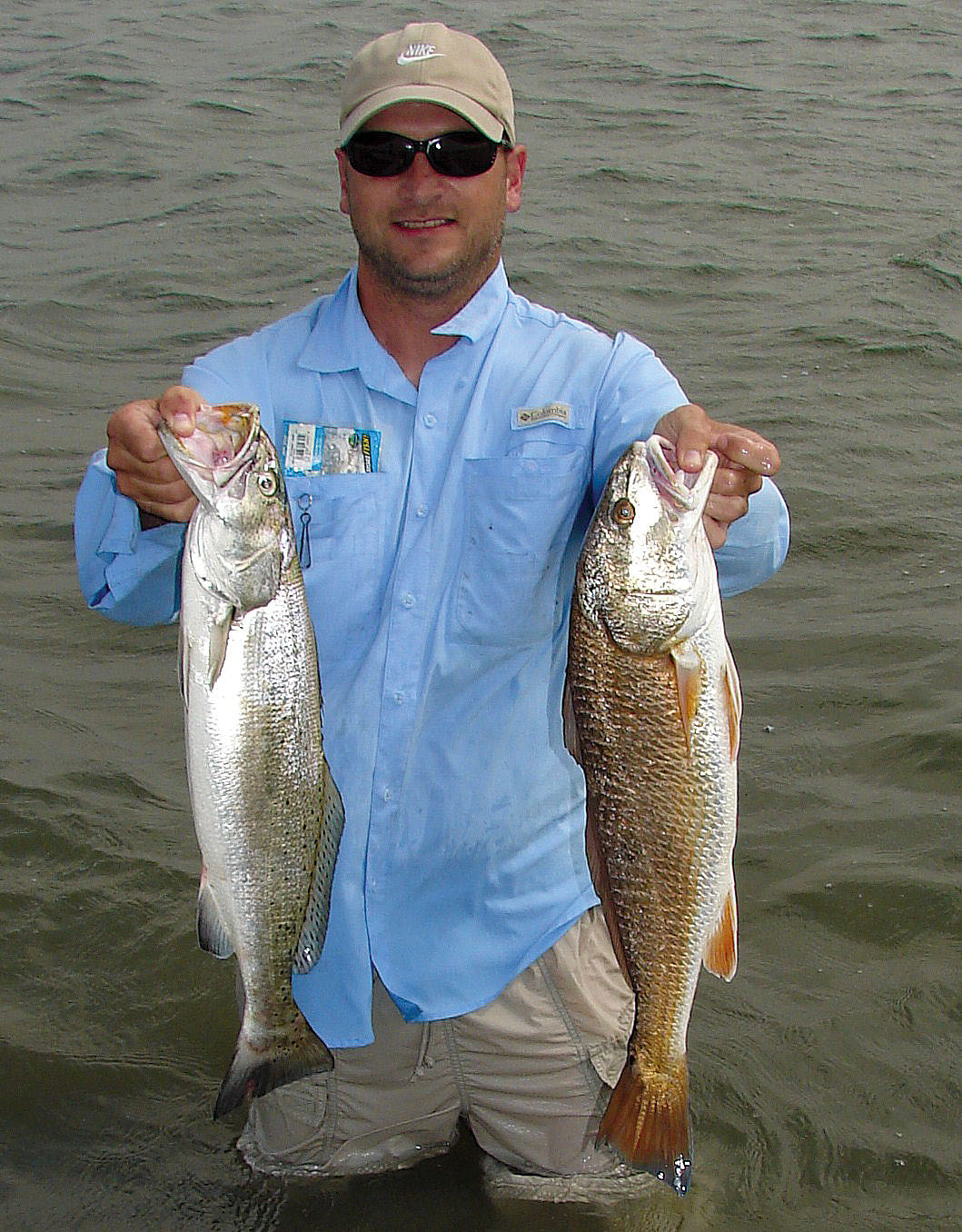 Brett Cleveland holds proof that big trout are known to run with large redfish.
Fishing in the Port O'Connor/ Seadrift area has improved steadily and hopefully April will be on par with previous years. I consider April a prime month to catch the speck of a lifetime and I want to share a few secrets. I say secrets because I've never seen them published. I have witnessed these things to occur on an annual basis and have been rewarded with two trout over 10 pounds right here in my home waters using them. I have lost count of the number over 28" caught by customers I have guided applying these tips to our fishing strategies. All of this is based on my experience in the Port O'Connor/Seadrift area but could apply to most any location up and down the Texas coast.

During April my primary targets are main bay shorelines while concentrating on irregularities; oyster reefs, sloughs and drains, grass patches and also coves protected from the sometimes brutal southeast wind. These areas will be covered up by mullet and will have good current flowing through the guts along the shoreline. We will not worry about the direction of the tide flow because most people cannot adjust their schedule to meet the right tide on a given day, although my personal favorite is incoming.
Pay attention to the gender of the trout you are catching. Are they grunting? If so, you are catching males. I have noticed that on many occasions when we find mostly males in a given area it won't be but a few days until the bigger females show up. I don't know what kind of ritual is going on but I see it every year, no supporting theory and nothing scientific being offered, just what I have witnessed and logged the past twenty four years as a fishing guide.

Pay attention to the prevailing bait species and try to target areas with concentrations of menhaden. I have caught many large trout following menhaden rafts up and down the sandy shorelines of Espiritu Santo, San Antonio, Ayers and Mesquite bays. I also key on mullet but I prefer menhaden. Your bigger trout will often hang right under or in the shadows of these schools.

As mentioned above, you can't always plan your trip around a specific tide event or moon phase, but when you do go, try to position yourself in the best place possible. By this I mean find an area that has a large amount of rafted bait and follow the schools. Cast all around them until you figure out if the specks are under, alongside or trailing the bait. Once you have this figured out, continue casting into the same areas. If there are many rafts cruising the shoreline you can just stand in one spot and make your casts around the schools as they travel past. On outgoing tide, try to position yourself in front of or around the mouth of a drain or slough. The fish will follow the bait from backwater areas to the main bay.

Ever been catching reds one after another until you finally got tired and moved or left because they were tearing up all your MirrOlure Fat Boys? If so, you might have made a big mistake. I can remember more than a few April trips when we kept plugging away until the redfish thinned out and the larger specks took over. One April trip really stands out, probably because Shellie was with me. We had southeast pumping into a cove and the bait was piled in there; we could do no wrong. Many redfish were caught and released and I had grown tired of them. Shellie had landed several trout in the 26" class so I moved fifty yards closer to her. She evidently didn't appreciate me moving in as she drifted toward the spot I had just vacated and soon had a 27" trout. I invaded her spot again. The lesson in this (more than crowding your wife when she's on fish) is that big trout run with redfish. Photos from that trip can be seen on our brochure cover and our website: www.bayrat.com.

I want to remind everyone about stingrays. The water is warming and we are seeing more rays everyday. ForEverlast makes the best stingray boot out there with a sole proven to handle shell reefs. If you prefer legging type guards they have these too. ForEverlast has several new fishing products and I really like the Pro Wading Belt with removable back support and Velcro/removable tackle box on the back. They also have a new stringer that makes stringing and unstringing very easy. Go to www.foreverlast.com and check out all the new products. They are a family-owned Texas company and their products are tested by real fishermen.