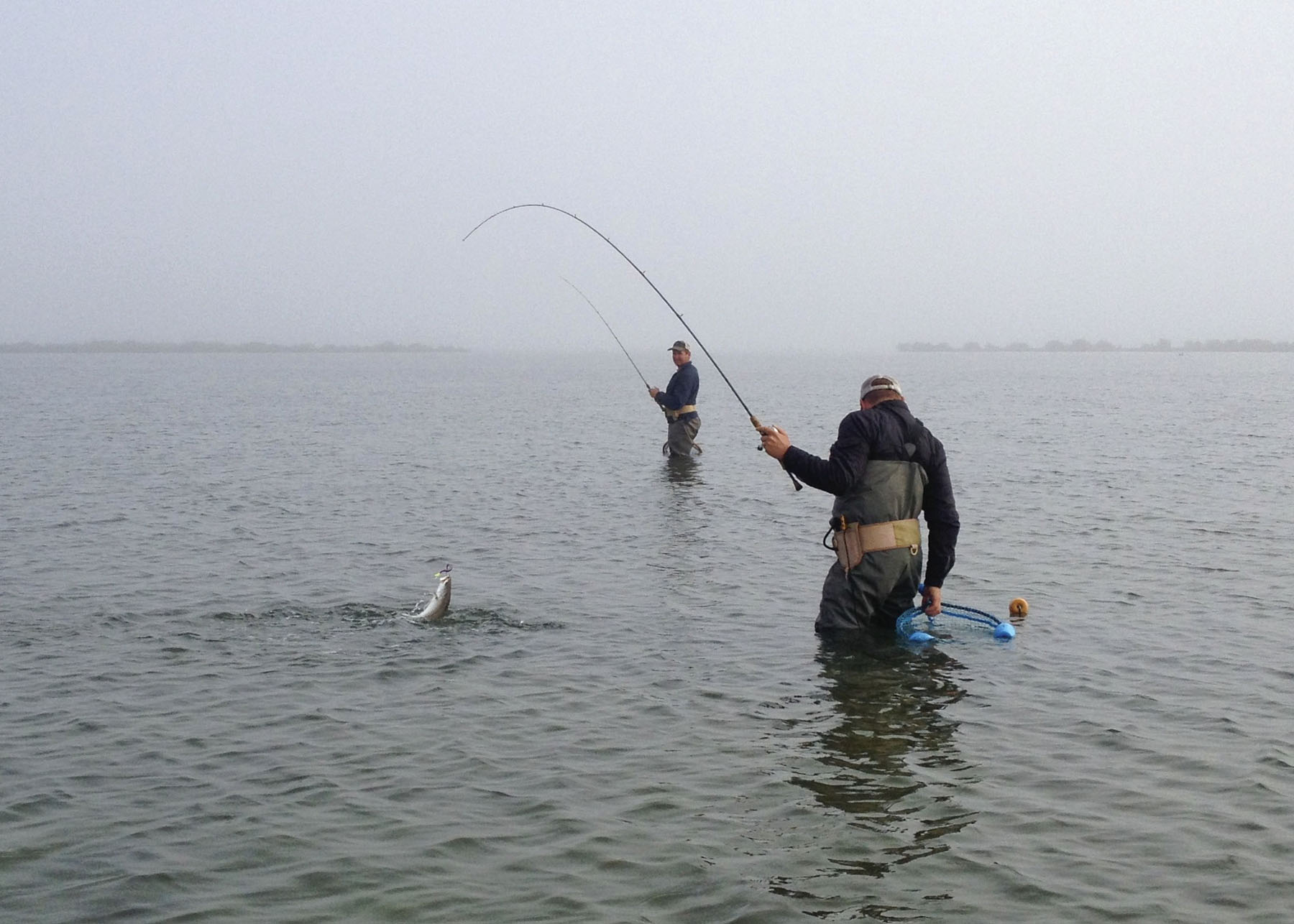 The Hammons brothers strike again.
Fishing during March, when we could get out, was above par although the guys who would not wade were cheated out of some of the finest trout fishing I have seen in quite some time. They were cheated because the water has been exceptionally clear and shallow, and stealth is the key to getting on them. Drifting has been unproductive in these conditions; the better fish scatter before you make your first cast. That's how big trout get bigger.

Granted we were still able to catch fish drifting but they were not of the quality we have been catching while wading. Best areas for drifting tend to be deeper with slightly off-color clarity. Funny isn't it? In the colder months we spend time looking for murky water and then during warmer months we search for clearer water. For someone new to fishing it could get discouragingreading February's article in June and not able to put two and two together!

On a recent trip I had the pleasure of fishing Cody and Bryan Hammons, brothers who grew up in Victoria but have since moved off, following their careers. This brother duo were the perfect example of what a guide wishes for in a clear-water wading scenario, or actually in any scenario. Neither of them rushed through the wade, especially important in shallow clear water, which I liken to stalking deer on foot on a quiet day. If you make unnecessary noise you will alert the fish and the first fish to leave the area will be the big bucksI mean the big trout. So remember, if you can hear yourself swishing and splashing – Slow Down!

Another plus was their tackle was in the right shape. Too many times guys show up with half-spooled reels that grind and squeal and this makes me crazy. I usually end up working on them after the first wade, if not before. This of course leads everyone to fend for themselves while they are wading and me in my Shallow Sport cleaning and oiling an obnoxious reel. Okay enough preaching on that, but please check your reels before the trip. The Hammons brother brought good rods too; each with a Waterloo and an FTU Green Rodperfect for wading with lures.

They were dressed for the job, too. The right attire makes a huge difference when wading in the unforgiving weather during December through April. They showed up at the dock, in Simms waders and boots, ready to fish.

Clients often ask, "Hey, does Simms give you guys those waders, you being guides and writers and all?" News flash - I bought mine from Joe Meyer at FTU, just like everybody else. I not only wear mine on fishing trips but on the duck hunts I run as well. Cutting brush, brushing blinds, in and out of blinds and airboats all day takes a toll. They show the wear and tear but for three years not a single leak. Try that with other brands.

Sorry for the equipment rant but this is coming from someone that sees all kinds of guys and equipment during the year. You can tell who really is ready to fish from someone who only thinks he is.

The morning I took the Hammons brothers the fog was terrible. You guessed it; they showed up early at Charlie'salways a plus! We stowed our gear in my Shallow Sport and ran slowly by GPS to our destination. We were able to get two hours of interrupted fishing as the fog delayed the Saturday morning brigade, waiting for the fog to clear.

Cody hooked up first with a 20-incher, then me with a 23; we all ended up with a few on the first wade. The second wade was a little further down the same shoreline in another cove. I believe Cody started it off again with another healthy trout and a fleeing mullet was met by my ol' faithful 4" Assassin Sea Shad in Slammin' Chicken. A couple of twitches and bam! I landed one of the largest trout I have caught in quite some time in the Port O'Connor area, longer than the 28 mark on my Waterloo Slam Mag, maybe a 30. We made a few quick photos with our cell phones (carried in waterproof pouches) on the spot and she was released unharmed. No dragging back to the boat like you see in a lot of pictures.

I can't remember who said it right then, either Cody or Brian, "I thought trout that size were just a myth!" I only wish one of them had caught it but they went on to land sight-casted trout, reds and even drum that day never more than knee-deep.