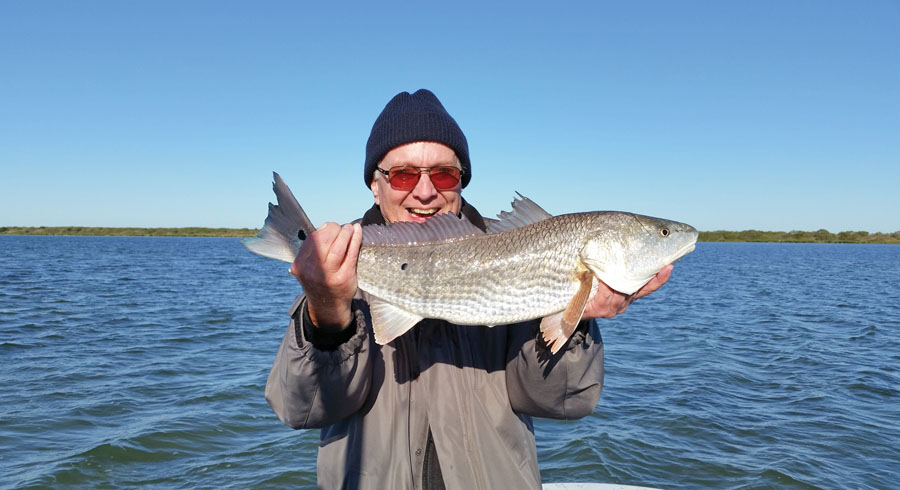 Al Gilliland getting in on some redfish action.
We have had approximately 4.75" of rain since January here in the Seadrift area. This is a little more normal rain pattern than the drought we have been stuck in the last few years. I am expecting good things between normal precipitation, the opening of Cedar Bayou and the reduction of trout limits.

I have been running reconnaissance in the area bays and refining my list of locations I will be targeting with my trophy trout guys that come every year. I was happy to see how many different locations were holding quality fish of all species, not just trout. Now granted, fish have tails and use them. Reconnaissance is always valuable though, to understand the structure type fish are relating to and also a great way to keep an eye on bait movements from back lakes to bays and vice-versa, along reefs and shorelines, etc.

When I see upper-class trout hanging on a gin-clear shoreline in six to eight inches of water with bait nowhere near, I will presume these fish are just sunning or maybe just resting where they will not be disturbed before dropping off to a deeper feeding area. Now if I see upper-class trout hanging with a school of black drum (very common in my stomping grounds) or a few redfish, or even running with some larger mullet; I call this game on! These fish will feed aggressively, and it is possibly more of a competition thing with the reds and drum.

During April we often find large schools of smaller specks. I would encourage that you swap treble hooks for singles on your plugs to avoid injuring them. Better yet, if they are super aggressive, move to another spot. That is really the best answer because even jigs are often inhaled deeply enough to wound mortally. They'll be solid keepers next year.

For the most part I will be bouncing between Mesquite and San Antonio Bays during April and early May. When the glass minnows show in strong numbers you might see me cutting across West Matty to meet afternoon incoming tides. Trout action can be exciting when the tide sweeps glass minnows along guts and bars of this sprawling bay's south shoreline.

Currently, the larger trout I have been catching have been in the back lake entrances, on an incoming tide. I am finding them where the deeper parts of the channels flatten out inside the lakes. If the tide is weak or current is wind-generated, you can catch them by wading the channel itself but be cautious of boat traffic if it is a popular lake entrance.

The go-to lure lately for me has been the Bass Assassin 4" Sea Shad in Green Moon rigged on 1/16 ounce Assassin jigheads. I don't really think color is a huge factor or let's just say color is not as important as the action of the lure you choose. The reason I like the smaller 4" inch paddle tail versus the straight tails is you do not have to work the lure as aggressively as the straight tails to achieve enticing action. As a matter of fact you could just reel it and the tail will do the work for you, but I prefer to jerk and pop the lure depending on what the fish like any given day.

During the extreme temperature drops we were depending on the Paul Brown Fat Boys as much as my Assassins. But during April we normally stick with either the 5" rat tail Assassins or the 4" Sea Shad, when we're not throwing topwaters.

I received my Shallow Sport X3 and I want to offer a hearty THANK YOU to Wes Hudson and his team at Shallow Sport and also Wade, Lorraine, Cole and Chad at Coastline Marine. This boat enables me to run safely across any bay under adverse conditions comfortably, and still fish the ultra-shallow waters I call home a lot of the time. I don't have very many things nowadays that make me say wowbut, wow!

I know there are some naysayers and I can understand their skepticism. However, I invite them to meet me at Charlie's when I get in from a trip. Or even better, let's schedule a test drive. I already have a lot of interested boat owners on the books for test drives. Wes has always been legitimate with his numbers at Shallow Sport as far as draft, and I have found it drafts the same as my 24' Sport did.