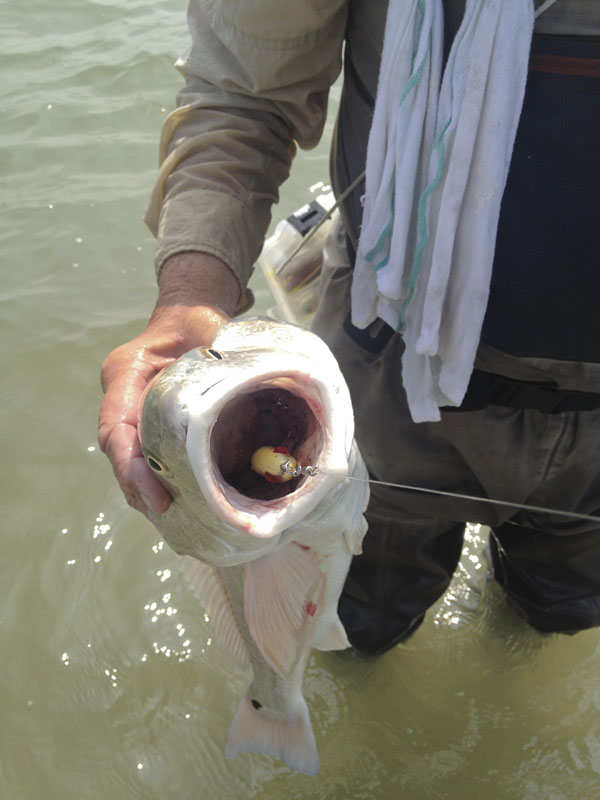 What a mild winter we've had. Above normal temperatures and the rain we had earlier in the year have given our bays and estuaries the much-needed boost to bring them back to normal.

It is my opinion that everything is running at least a month ahead of schedule, as far as the conditions and catching are concerned. My dad (Charlie's Bait Camp) said his live bait catcher was finding perfect sized croaker at the end of February while trawling for bait shrimp. Believe it or not he received his first batch of croaker at the Bait Camp during the first week of March!

That tells me I am correct in thinking we are a month ahead of our regular fishing schedules. With that being said the fishing in March has been on fire and every sign indicates it will continue into April.

There are a few things we can depend on in April; the most important of these will be the wind. I know, we all cuss it, but during those days that we have weak tides, the wind will make the water move up and down shorelines at a stronger rate. It will push water into the back lakes or out of them, depending on the wind's direction. It will push water across reefs and around points on any given shoreline. Given the choice I will take a windy day of fishing over dead calm conditions any day.

The areas I will be fishing in April are probably the same areas I am fishing now in March. Shorelines with back lake entrances are what I am keying in on, mainly on the south shorelines of West Matagorda and Espiritu Santo. The bay I will be fishing on any given day will be dependent on the quality of fish the bay has given up recently. As of this writing West Matagorda is my go-to.

On the main bay shorelines, what I will be looking for is our annual migrations of menhaden and/or glass minnows. We normally see an influx of menhaden running up and down the shorelines during April. You will be able to see the rafts of baitfish easily, cruising just off the shorelines. To set up and fish these you will want to wade to within casting distance of the rafts and cast towards them as they approach, working your lure along with them. I will make some drastic jerks and pauses to make my lure stand out from the baitfish crowd and hopefully entice a trout to make an instinctive strike.

I will also be making casts across the leading edge of the menhaden and the tail end of the bait school as well to see where I might get a hungry trout to pounce on my lure. A lot of times the water will be clear enough to see the trout and reds swimming with the menhaden. This can sometimes become annoying if they are not biting, but still cool to see.

The type of lures you will see attached to my Waterloo HP Lite will vary more this time of year than any other. I will usually start with a MirrOlure She Dog in the GCRRH (red head, chartreuse back, chrome body) and the CHPR (chartreuse back and belly, pearl sides). I personally like the way these colors look but I also feel it's more the action and sound of the plug that draw strikes over the colors, normally.

Another lure that works great for the menhaden schools, and especially on the glass minnow influx that happens on afternoon incoming tides in West Matagorda Bay, is the MirrOlure MirrOdine XL in the 27MR-CH and in 27MR-S. Again, the flash and the action of these lures account for more of the catching, not the color. But that's my opinion and you know what they say about opinions.

You know, I can't talk about lures and catching fish without mentioning the tried and true Bass Assassins. Whether it be the 4" Sea Shad paddletail or the 5" Saltwater Shad rat tail. I prefer these lures over other soft plastics because–you guessed it–the action of these baits is what does the trick, not the fantastic array of colors they are available in. I have been known to stick with one color day in and day out that has been producing. This is my preference and how I fish, and this is how it will always be until someone comes along and shows me that another certain color will work better. I have seen that happen maybe five times in 30 years of guiding. My Assassins are almost always rigged on 1/16 ounce Assassin jigheads. But again–that's just my opinion.