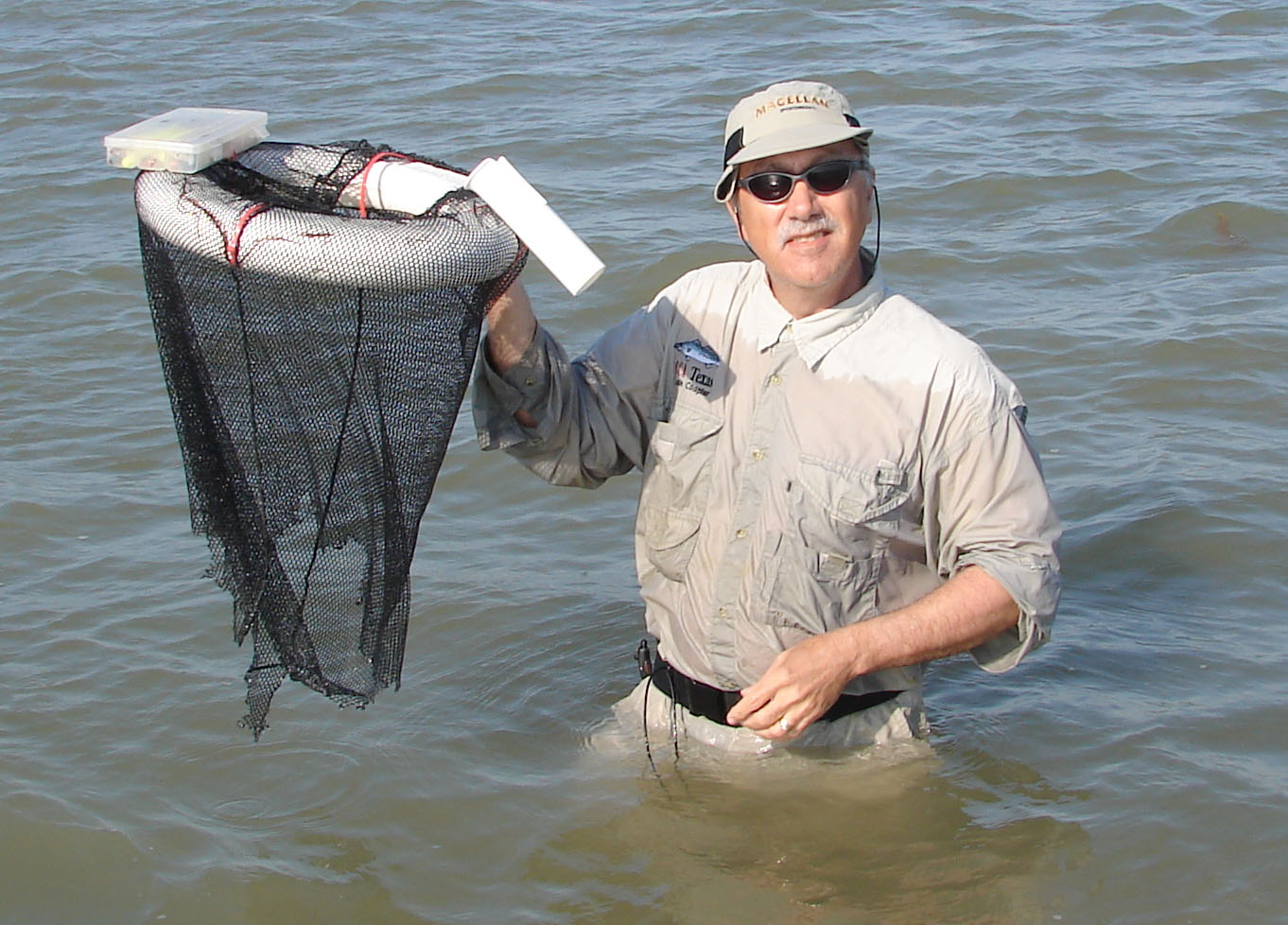 Doug Howerton shows what is left of his do-net after his close encounter with a shark.

As I write this month's article the thunder is rattling the windows and the rain is still here, just like it has been for seven days. Folks on the middle coast are not the only ones feeling the effects of the heavy rains, everyone from the Panhandle down to the Texas coast have had a deluge of rain. The runoff from these rains will haunt us for the next month at least.

Looking back in my log book at July 2006 I noticed that we received eight plus inches of rain locally towards the latter part of the month which normally only effects us for a short period of time; however, the rains we have received lately are effecting the Hill Country as well. This additional run off will flood the Guadalupe River and in turn flood San Antonio Bay. This flooding would normally affect the Rat Pack tremendously earlier in the year, but this time of year I have been fishing closer to the Gulf passes in West Matagorda Bay. I am hoping the weather will soon stabilize giving me an opportunity to jump back into the surf again like I was able to do in the prior months.

I have had some excellent trips in the surf this year with most of the trout measuring 20 inches and up. I even landed a 31 inch ling fishing from the first sand bar. That is one of the things I like about fishing in the surf, you never know what you are going to see or catch out there. If you have the family with you and the seas are calm enough, Matagorda Island is a great place to do a little beach combing.

Normally when I fish the surf I will start the day chunking topwaters, but the majority of our trout this year have been caught using Texas Assassins in what I like to call the "bling-bling" colors (red shad and firetiger). I have also had good success using the Assassin Swimming Shiner in the clown and baby trout colors. I rig these soft plastics on a 1/16 ounce Assassin lead head attached to a 20# test leader that is connected to a small # 8 swivel tied to the main line. The first thing you will notice about the trout in the surf is how much more aggressive and violent they are compared to trout caught in the bay waters or back lakes. They literally inhale soft plastics or topwaters without any hesitation so unless you enjoy having to retie a new lure every other cast I suggest using a leader like mentioned above.

One of the surf trips that comes to mind was when I was fishing with one of my customers, Anthony Andrews, and his friends. The trip started out normal enough, anchoring the boat on top of the "Hump" which is a large sand bar just inside of Pass Cavallo; we started to wade towards a drop off that had been producing good trout in the 17 inches and up category. It seemed everyone was hooking up constantly and then, like throwing a switch, the bite stopped. I mentioned to Anthony, who was wading next to me, "I don't know why the bite would come to such a screaming halt." I had just barely finished my sentence when I felt a really violent jerk on my stringer and when I looked back to see what was going on all I could see was a lot of thrashing white water.

I am not sure what all I said during the attack but I am sure the words were too graphic for this article. I was scanning the water around me, making sure there were no fish parts near me, when I heard Anthony ask, "Was that a shark?"

With a shaky voice I said "yes and a big one!" As I made my way back toward the boat Anthony continued to fish and I couldn't help but think–man, he's got some big cajones!

Right about this time my stringer float surfaced about 20 yards away so I made a cast and reeled it back to me. I almost couldn't believe my eyes when I noticed that the shark was nice enough to leave me four nice, fat trout. I figured I must have scared him away with my shark dance before he could finish devouring his meal.

Since Anthony was still catching I decided, what the heck, the shark is gone so I'll keep fishing too. This seems easy enough, but every time a mullet jumped or a trout on my stringer tugged a little I would jump like a little school girl. We fished this way for about 12 minutes landing more trout when all of a sudden my gray friend made a return visit. This time he spent some time near me thrashing and eating what he wanted. At times I could feel the water pressure from the movement of his tail.

I headed for the boat and asked Anthony if he was ready to make a move. He replied "yes," but funny enough he kept fishing with his stringer wagging behind him like he was shark proof until I brought my Shoalwater Cat up to him.

We left the "Hump" and headed for the surf. We had an early morning breeze that had already diminished to nothing as we headed south out of Pass Cavallo. We continued our way south until we found pelicans on the shoreline and others floating on the water. I can't remember who hooked up first, but all I know was you could definitely tell you were in the surf by the fight and size of the trout. This day the water was very clear so you could easily see all the bait fish along with some small 18 24 inch Black Tip sharks cruising down the guts.

Every so often I would see a large school of pogies that covered about a fifty foot area take off running for their lives. Normally I wouldn't give this too much thought, but today seemed to be the running of the sharks so I paid special attention to these pogies, straining to see what lurked beneath them. Sure enough, while looking towards the area that this scenario had just occurred I saw a 7 to 8 foot shark swim over the first sand bar where I was standing and come up in the gut behind me. Lucky for me the shark never even looked at my tempting stringer and boy was I glad.

This continued throughout the rest of the morning but for whatever reason the big gray shadows would just appear and then disappear not ever attempting to get close. It was almost as if they were just reminding us that we were in their backyard and not to forget it!

There are many dangers associated with fishing the surf so here are a few safety tips to remember when you venture out to fish. The closer you get to the passes the harder the current will run down the beaches which makes for very dangerous fishing situations. I will never fish close to the passes for this reason. If you decide to fish near a pass please always use a PFD.

You may also want to consider using a landing net if you don't already. I have a great fear of reaching for a thrashing trout about the same time a shark does. The use of long stringers and do-nets are also great tools to consider while fishing in the surf. And then of course there are always the ever present stingrays and Man O'War jellyfish so wearing ForEverlast Ray Guard Shields and long pants is always a good idea.

There are good times to be had while fishing the surf just remember to fish hard, fish smart!