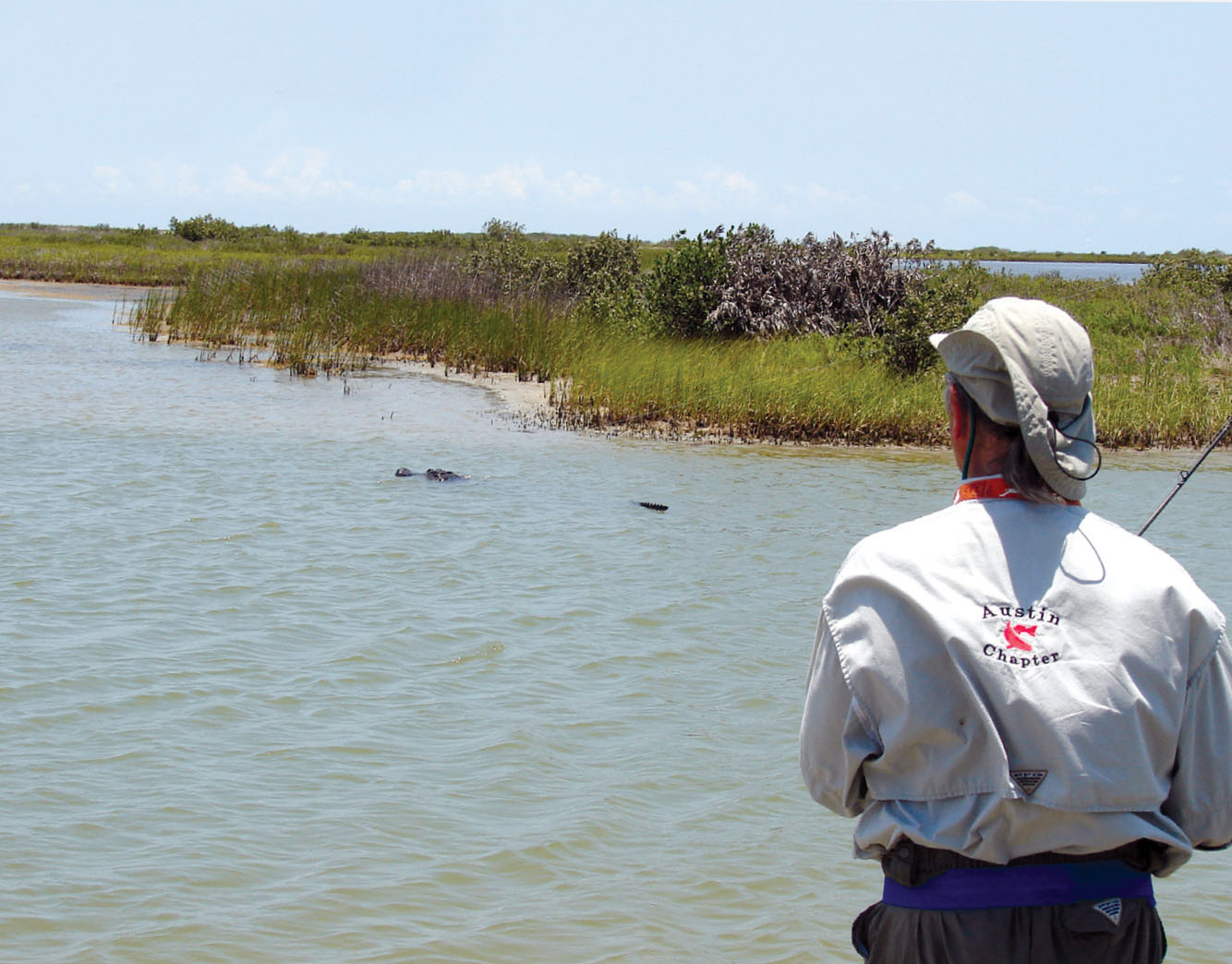 This nine footer surprised us while wading a back lake pass.
We asked for it and we got it! I can remember in May and June praying for the winds to die down so we could fish some of my favorite reefs in San Antonio Bay. I got what I asked for and it has really been paying off for me and my clients. Not because I can get out to the reefs but because everyone else has been heading to the reefs now and leaving the shorelines to a few of us. I have had some excellent days chasing my speckled friends, but like I said I have spent more time on the shorelines in July than I have in past years.

There are two reasons we are staying on the shorelines of San Antonio Bay. One reason is the size of the trout we are encountering and the second is the amount of finger mullet and baitfish that are inhabiting these shorelines. It seems there are more baitfish than I can remember for mid-summer months staying right on the shorelines, and the size of the rafts look more like surf mullet rafts. So yes, it has been very hard to venture onto my favorite summer haunts because of this. I haven’t even thought about the surf lately or wondered if it was calm enough to get out there….. Well okay, I still think about the surf.

We have released trout up to twenty-nine inches shadowing these rafts of mullet, and redfish to thirty two inches have been released to swim another day. The average trout we are harvesting are very healthy and are running from seventeen to twenty two inches. We have been catching very few throw-backs. That is some excellent fish people, they seem more like surf trout to me.

Okay, okay I’ll explain more of the structure we are fishing. I concentrate on the outlet areas that drain the vast expanse of marsh from Matagorda Island and also the area in front of the many back lakes of the island. I prefer an opening that will have small islands or shell around the openings so I will have more structure to focus upon. I have been wading from calf deep to waist deep, always starting shallow in the morning of course.

The lure that has tricked more trout on these outings has been the 5’’ Saltwater Assassin. I stay more with the natural colors; Bone Diamond, Baby Bass, Pumpkin Seed, and to add a little flash Opening Night, all rigged on 1/16 oz. Assassin jigheads. I will let the fish dictate what speed I need to work these baits. I have been throwing into and all around the rafts of mullet. It seems like the trout are staying very close or right under the mullet until its time to eat.

When the trout shut down or move out to deeper water in the heat of the day, we move to the actual drain or deep cut going into the back lakes. Here we have found flounder and redfish in the cooling depths of these drains. The preferred lure for these guys has been the 4” Sea Shad in Pumpkin Seed/Chartreuse and Bone Diamond. Hop the lure along the bottom slowly. Funny, that’s how John Howerton found the first of our many gators on a recent trip. John started fishing the drain before I got there and he was hung up. I told him there shouldn’t be anything to snag on, and about that time it came loose. A few seconds later his “snag” came to the surface, the alligator was every bit of nine feet; it never bothered us and vise versa. We managed two more reds and three flounder from the spot. A word of caution though regarding the deeper cuts; we have also found six to nine foot alligators enjoying the cooler water temperatures of these drains. I have also seen them on the flats adjacent to the drains I have been fishing, so be very careful when trying to wade into the drains, you don’t want to step on one of these bad boys.

I also would like to mention that my 2008 21’ Shoalwater Cat w/ 200 Evinrude ETEC is for sale and anyone interested can contact me through e-mail or phone.