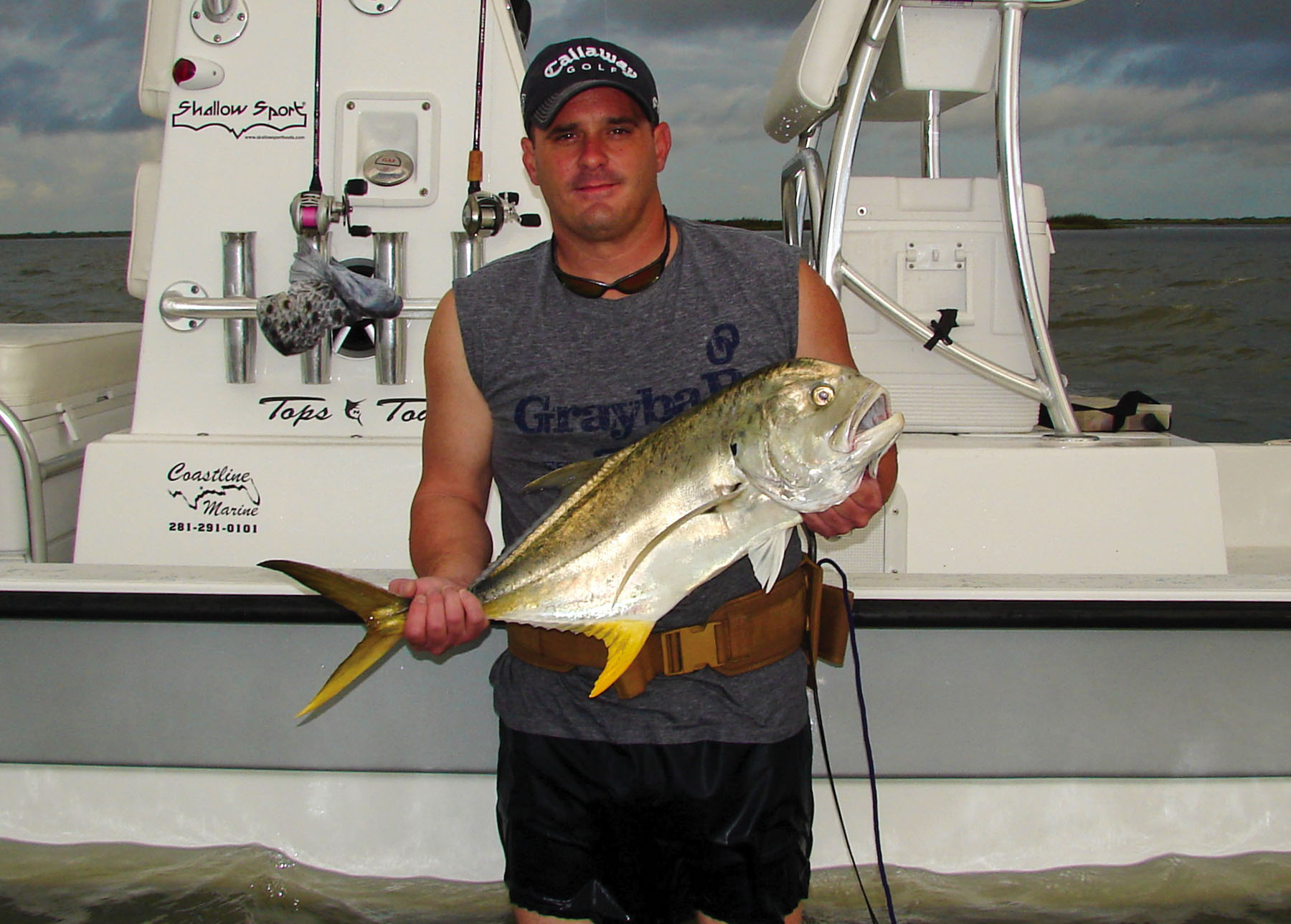 Seth Bihm occupied his time between trout bites with his first jack crevalle.
Here recently, the summer of 2010 is shaping up to be the closest thing to the good old days as I have had the pleasure to present to my fishing clients in a long time. I think the positive effects of all the rain and cold weather this past winter are finally being realized as our entire San Antonio Bay ecosystem returns to some kind of normalcy.

We had some very light wind days in June and July so I made my way to the surf along Matagorda Island numerous times only to find myself back in either San Antonio or Espiritu Santo Bay the next day. The surf trout bite that we have grown accustomed to over the years just hasn't materialized for me not yet anyway. We've had a few good days in the surf but the norm has been making six or more stops to get on a decent bite. One of the problems in the surf has been hoards of gafftopsail catfish, "slimers" as we call them. They will hit a MirrOlure She Dog or a Saltwater Assassin as readily and hard as any surf-run trout. Trying to avoid them has been the single biggest reason we have been making so many moves. No sooner we find trout action and the gafftops take over and shut it down.

We should still be fishing the same late-June and July patterns well into August. This means calm day reef hopping in San Antonio Bay, so long as the size of the trout holds up. When the size is not to our liking or the wind dictates another plan, we will opt for wading the shorelines of either San Antonio or Espiritu Santo Bay. A word of caution keep an open for alligators patrolling the areas in and around the Matagorda Island sloughs and all along the Aransas Wildlife Refuge shoreline. These guys can be a bit "overly friendly" at times.

Early starts have been a key to success as was seen recently when my team won the Spaw-Maxwell Arriba Pescado Guides Cup and will continue during August's dog days. We are leaving well before sunrise to cash in on the early morning bite. This tactic is really a must on weekend trips when the first stop can make or break your day. Once all the other boats hit the water and run up and down every shoreline; you can pretty much kiss your chances of a good second stop goodbye.

Lately we have been throwing the Bass Assassin Swimming Shiners in the clown color the majority of the time. I have a lot of faith in this lure and my customers are starting to acquire the same faith as it has produced consistently, even during some of the most finicky trout bites. These baits are easily fished across shallow grass beds or by allowing them to sink along a ledge. The paddle tail and larger body helps anglers control the lure much better than some of the other paddle tail type lures we've tried.

Not much of a topwater bite to speak of lately but that doesn't necessarily mean there's no topwater action to be had. I start most mornings with a surface plug but it won't stay on my line very long if I cannot trick them into hitting it steadily. It has simply been too good with Swimming Shiners and Assassins to miss that morning bite.

In my last article I mentioned my new 24' Shallow Sport from Coastline Marine in Seabrook. You would have to ride in this boat to believe how well it performs. I like to call it my office and all I can say is I am now fishing from the best looking and most functional office I have ever occupied. This Shallow Sport combined with the Yamaha 225 SHO four-stroke outboard has made my job so much more pleasant and easier on me and my customers. If you are wondering how a shallow water boat is supposed to perform, give me a call or stop by Charlie's Bait Camp for a test ride.